How Many Crazy Things Can Michele Bachmann Say in One Interview? Let’s Find Out October 9, 2013 Jessica Bluemke

How Many Crazy Things Can Michele Bachmann Say in One Interview? Let’s Find Out

For some reason, people keep plopping a microphone down in front of Rep. Michele Bachmann and she obliges them by just blathering on about whatever insane crap enters her brain. 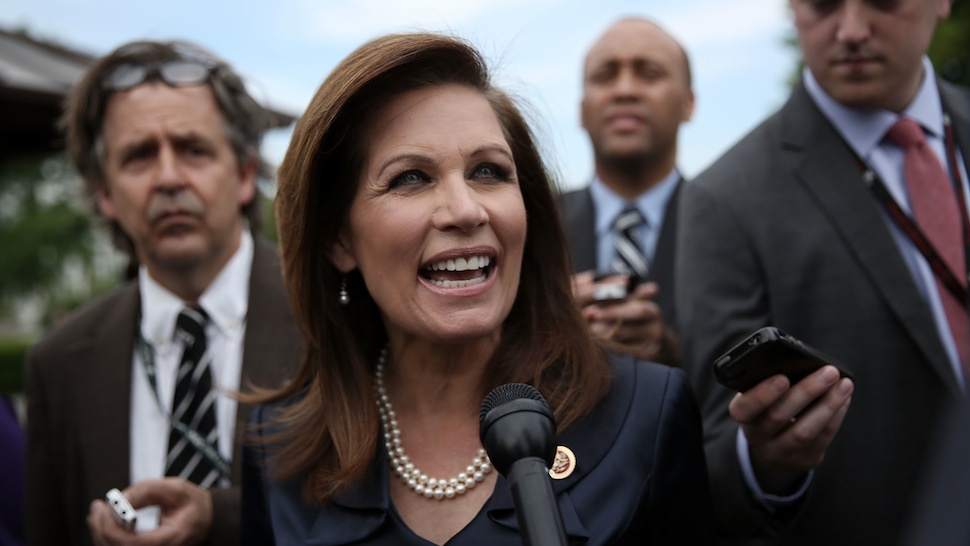 Most recently, she went on a show called Understanding the Times and explained how, obviously, President Obama is giving bombs to terrorists and, oh by the way, end times are upon us and Jesus is on his way.

You really just have to read it. And let me take a moment to thank the fine folks over at Right Wing Watch for transcribing this crap because I just couldn’t have done it.

This happened and as of today the United States is willingly, knowingly, intentionally sending arms to terrorists. Now what this says to me — I’m a believer in Jesus Christ, as I look at the End Times scripture — this says to me that the leaf is on the fig tree and we are to understand the signs of the times, which is your ministry, we are to understand where we are in God’s end times history.

For the record, the whole “arms to terrorist” thing she is referring to is (surprise surprise) more complicated than her soundbite might suggest. Actually, what happened is that the Obama administration is providing or licensing some non-lethal assistance to vetted Syrian rebels who are not affiliated with terrorist organizations. According to a press release from the White House, this includes things like protective equipment that would guard against chemical weapons. And, hey, if she has a problem with that, she is absolutely welcome to express her opinion. But she has opted, once again, to just build a straw man and do a little tap dance around it.

Anyway, I’m sorry. I interrupted. Bachmann was saying something about the end times, I believe?

Who knew?! End times are not going to be scary! They’re going to be super-rainbow-kick-ass-fun-times! Out of curiosity — I’m no Biblical scholar — I checked to see what the Good Book has to say about end times. I was really excited to read about the unicorns and teddy bears and hugs for everyone from Jesus! But I couldn’t find those references:

The sun shall be turned to darkness, and the moon to blood, before the great and awesome day of the Lord comes. — Joel 2:31

Yikes. Um… Michele… I don’t think they meant “awesome” they way I use it, you know, usually in conjunction with “dude” or “effin.” I’m pretty sure they meant the original meaning.

Rather than seeing this as a negative, we need to rejoice, Maranatha Come Lord Jesus, His day is at hand. When we see up is down and right is called wrong, when this is happening, we were told this; these days would be as the days of Noah.

Hooray! The vast majority of people on Earth are going to die! Rejoice, guys!

Okay, so I suppose looking over all of this, she’s not saying a whole lot that’s not par for the course for many fundamental Christians.

However, for a person who is somewhat responsible for, well, laws that affect all of us in our day-to-day lives, she kind of runs off the rails when it comes to her thoughts on immigration and religion. She starts discussing the plans to build a new mosque in her home state of Minnesota, and the fact that the president of Turkey went to Baltimore to dedicate the largest mosque in North America.

We’re seeing this all across America, it’s like groups want to top each other and be the new, latest, largest mosque in North America.

Well thank goodness no red-blooded, Bible-thumpin’ American Christian churches would dare to be what one might consider to be embarrassingly huge.

And, what we’re told, is that many of them are funded by the Saudi Arabians or the Qataris, and so many of these mosques — the funding actually comes from foreign countries that have interests in advancing the goals and beliefs of the violent Muslim Brotherhood and that should give us pause.

In my opinion, I think we should be hitting the pause button on immigration and on refugee resettlement. We have an issue now when you have Americans that are being recruited in America and going over and being involved in terrorism, I think we need to hit the pause button.

Wait. We’re not done yet. If you’ve stuck with me this far, we’re about to hit pay dirt. Are you sitting down for this?

One thing that we need to specify is that the motivation is inspired from religion. It’s from their religion of Islam. It’s because they believe that those who don’t agree with their religious interpretation need to be killed. Because they believe it’s by force that they wanna force everyone into becoming Islamic. They want to establish a global governance called a Caliphate. They want everyone to come in it.

Yes, how terrible it must be for people to push their moral and religious views onto you by building a place you never have to step into and where they can worship in private…

Bachmann is so deeply deluded in her own Michele-centered universe that she can’t even fathom how her own insane political party’s favorite pastime is to shove its religious beliefs down the throats of a bunch of people who also want nothing to do with it.

I don’t know how Bachmann sleeps at night with all that freedom dripping away.

October 9, 2013
Former Congressman Allen West: 'People Who Possess No Deep Faith Are Not Happy'
Next Post