Mormon Women Turned Away from All-Male Conference on Priesthood

Members of the group Ordain Woman, an organization dedicated to gender equality within Mormonism, were recently barred from a convention concerning male priesthood because, well, they’re heretics. 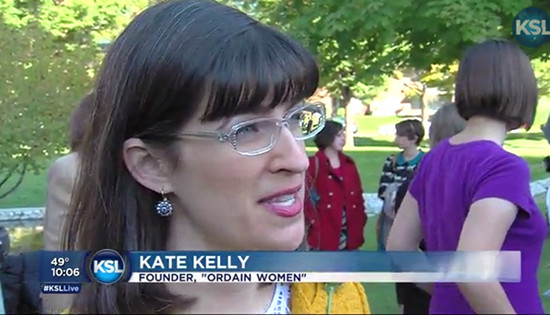 “I feel a little disappointed,” Ordain Women founder and human rights attorney Kate Kelly told KSL. “We know that there’s room in the Conference Center and we’re being denied admission on the basis of our sex and because we’re sisters and not brothers.”

According to the Mormon faith, priesthood is granted by God only to men because — and the official Mormon website seriously says this — “the Lord has put it that way. It is part of His program.”

(But 12-year-old boys? They were allowed right in without a problem.)

“If we allow our culture to reduce the special relationship that children have with mothers and grandmothers and others who nurture them,” Cook said, “we will come to regret it.”

There you have it: women becoming priests will hurt the family. Which, in the eyes of the Mormon church, places them in the same category as gays and lesbians.

I have to wonder what makes Mormon men so much more fit for priesthood than Mormon women. Perhaps they’re just better at ringing doorbells.

October 8, 2013
An Exclusive Excerpt from Nobel Laureate Leon Lederman's Beyond the God Particle
Next Post