FFRF to Prayer-Walking Police Department: ‘Get Off [Your] Knees and Get to Work’ October 8, 2013 Hemant Mehta

FFRF to Prayer-Walking Police Department: ‘Get Off [Your] Knees and Get to Work’

Yesterday, I posted about how the Cincinnati Police Department was teaming up with 25 local religious congregations to walk and pray through the city in order to stop crime. Not only did the CPD support the Prayer Walks, they came up with the idea in the first place! 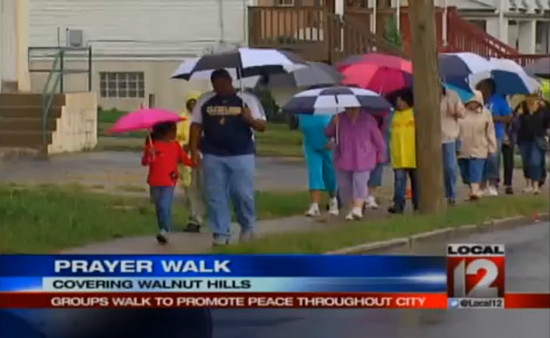 The Freedom From Religion Foundation took action quickly. FFRF Attorney Andrew Seidel sent a letter to Police Chief Jeffrey Blackwell letting him know the government-sponsored Prayer Walks have to come to an end (emphasis his):

Calling upon citizens to pray is coercive and beyond the authority of any government, let alone a law enforcement arm of the government. Citizens should not be made to feel offended, excluded, or like political outsiders because the police department they support their taxes imposes religious ritual on them. Put simply, your office is misusing its secular power to call for religious rituals and exhort citizens, regardless of beliefs, to participate in prayer.

To avoid the constitutional concerns and the divisiveness these prayers cause within the community the solution is simple: discontinue using your government office to promote prayers. While religious leaders are free to hold prayer rallies, the CPD is not. Public officials should get off their knees and get to work. Do something practical to prevent other such crimes.

Ball’s in the Chief’s court now. The evidence and law are not on his side. The right thing to do would be to let the pastors manage the walks while urging the police to focus on real, practical solutions.

October 8, 2013
Mormon Women Turned Away from All-Male Conference on Priesthood
Next Post