It was only two weeks ago when the Obama administration extended an invitation to the Secular Student Alliance to an upcoming “Interfaith and Community Service Campus Challenge” planning meeting: 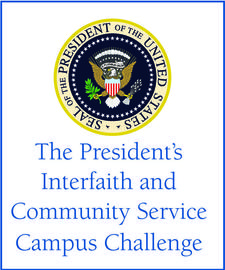 There was a little bit of grumbling from the atheist side, saying that the SSA should have rejected the offer because it would lend respect to the White House’s Interfaith outreach. By and large, though, I saw a lot of positive feedback from people excited that atheists were finally being offered a seat at the table, even if they believed the table shouldn’t have been there in the first place.

Makes sense. Who wouldn’t be in favor of more inclusion, right? And having a group that represents some of those 30% of Millennials who aren’t religious seems like a very logical move.

That is, unless you’re the Faith & Freedom Coalition. The group, founded by the Christian Coalition’s Ralph Reed, sent out an email blast to members Thursday night encouraging them to call the White House to complain about their outreach to atheists: 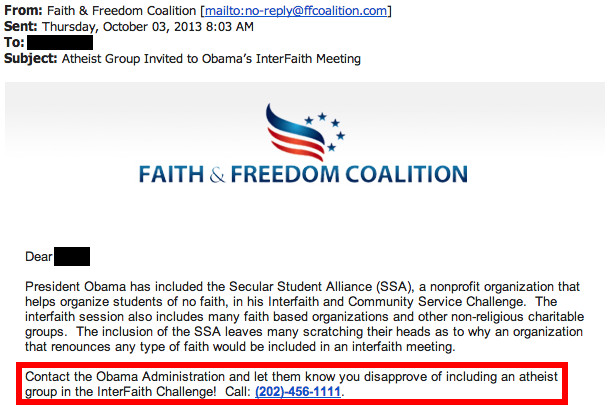 President Obama has included the Secular Student Alliance (SSA), a nonprofit organization that helps organize students of no faith, in his Interfaith and Community Service Challenge. The interfaith session also includes many faith based organizations and other non-religious charitable groups. The inclusion of the SSA leaves many scratching their heads as to why an organization that renounces any type of faith would be included in an interfaith meeting.

Contact the Obama Administration and let them know you disapprove of including an atheist group in the InterFaith Challenge! Call: (202)-456-1111.

YEAH! How dare the Muslim president invite atheists to our gathering?!

I would say call that number and let the White House know how much you support the Secular Student Alliance and the SSA’s inclusion in the interfaith gathering, but, you know… who’s gonna pick up?