Later this month, conservative Christians will gather in Washington, D.C. for the Values Voter Summit, a conference that will bring together brilliant conservative minds like Rep. Michele Bachmann, Glenn Beck, Sen. Ted Cruz, and Rick Santorum. 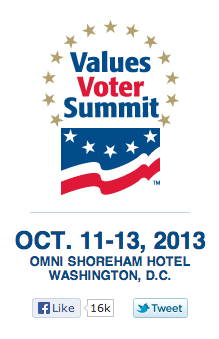 If you were to sign up for the event, you would get a letter from the Family Research Council’s Tony Perkins which thanks you for registering and reminds you that even one of our Founding Fathers wanted to see God in the government:

James Madison, the Father of the United States Constitution said, “We have staked the whole future of American civilization, not upon the power of government far from it. We have staked the future of all our political institutions upon the capacity of mankind for self-government: upon the capacity of each and all of us to govern ourselves, to control ourselves, to sustain ourselves according to the Ten Commandments of God.” Please pray with us that VVS will help equip families, churches, and communities across the United States to be active citizens that glorify God in the public square.

Just one problem with that: Madison never said it. It’s nowhere in his writings. The fact that pseudo-historian David Barton quoted it in the original version of his book The Myth of Separation is just more evidence that it’s fictional.

Rob Boston of Americans United for Separation of Church and State explains how we know Madison never said anything like this:

The AU press release notes that in 1993, the curators of the Madison Papers at the University of Virginia were asked if they could verify this quote. They could not.

“We did not find anything in our files remotely like the sentiment expressed in the extract you sent us,” curators John Stagg and David Mattern wrote. “In addition, the idea is inconsistent with everything we know about Madison’s views on religion and government, views which he expressed time and time again in public and in private.”

In colonial Virginia, Madison helped lead the fight to end the state church. His “Memorial and Remonstrance Against Religious Assessments” is a list of 15 reasons why church and state must be separate, each one a rebuke to the Religious Right.

During Madison’s presidency, he vetoed two bills, one that would have given a church in Washington, D.C., a symbolic charter to care for the poor and another that would have granted some surplus federal land to a church. In both cases, Madison insisted that the measures violated the First Amendment. (Madison ought to know, since he helped write it.)

Boston also talks about the late Professor Robert S. Alley, who also debunked the quotation beginning on p. 315 of this scholarly paper.

Tony Perkins might be interested in learning that even his buddy David Barton removed references to the quotation from subsequent editions of his book. On Barton’s WallBuilders website, he writes that the quotation is unconfirmed and should not be used by anyone without more evidence (Barton said that!) 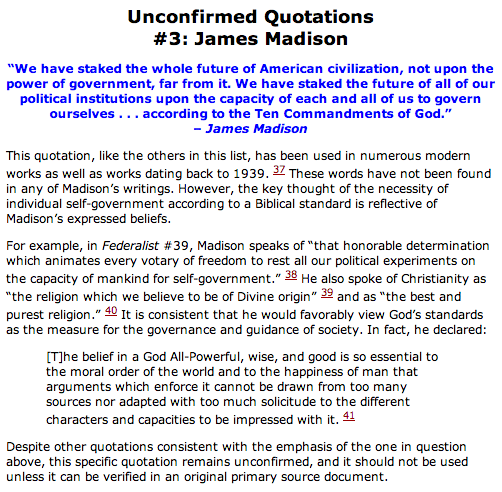 This quotation, like the others in this list, has been used in numerous modern works as well as works dating back to 1939. These words have not been found in any of Madison’s writings. However, the key thought of the necessity of individual self-government according to a Biblical standard is reflective of Madison’s expressed beliefs.

Despite other quotations consistent with the emphasis of the one in question above, this specific quotation remains unconfirmed, and it should not be used unless it can be verified in an original primary source document.

Madison, like the other Founding Fathers, wanted separation of church and state. Their thinking was: you can have your religion, but we ought to govern by the facts. Freedom of religion was so important to them that they enshrined their beliefs in the First Amendment.

To suggest that Tony Perkin’s God belongs in our government shows how little he knows about history and how badly he distorts his own faith.

October 2, 2013
Florida House Speaker Wants to Change the Law to Allow Football Coaches to Lead Athletes in Prayers to Jesus
Next Post

October 2, 2013 In Which I Send Danica Patrick a Get-Well Card
Browse Our Archives
What Are Your Thoughts?leave a comment