The results from Scotland’s 2011 census have just been released (take your sweet time, Scotland) and they show a growing divergence when it comes to religious beliefs:

Well, the Humanist Society Scotland says the results don’t reflect the truth about the religious identities of the Scottish people. The disparity is much greater than the census claims, they say:

HSS Chair Anders Östberg says, “The Census result suggests that many more people say they belong to a religion than is the case. The government will use census data to justify maintaining faith schools, and the funding of religious patient support services in the NHS, while religious groups will use it to lobby for their own institutions, and promote greater separation in our already dangerously divided society.”

The 2011 Census figures suggest that 37% of the population of Scotland is not religious. This is particularly questionable since the 2013 Social Attitudes Survey suggests the true figure is 48%…

“If the 2011 census gives an inaccurate picture of our beliefs as a society”, says Östberg, “it may lead to further discrimination against non-religious people. Our survey shows that Scotland is already effectively a secular country.

“Even though the Census results don’t show the true picture on belief in Scotland, we urge the government to to recognise that most of us are in fact non-religious, and share the same desire for fairness on issues like Equal Marriage and End of Life, which enjoy widespread support from people of all faiths and none.

Part of the problem may have been the question that was asked in the census: “What religion, religious denomination or body do you belong to?” That suggests that people have some denomination that they belong to.

That 2013 Social Attitudes Survey referred to above asked a different question: “Are you religious?” Turns out a lot more people say no when you ask it like that: 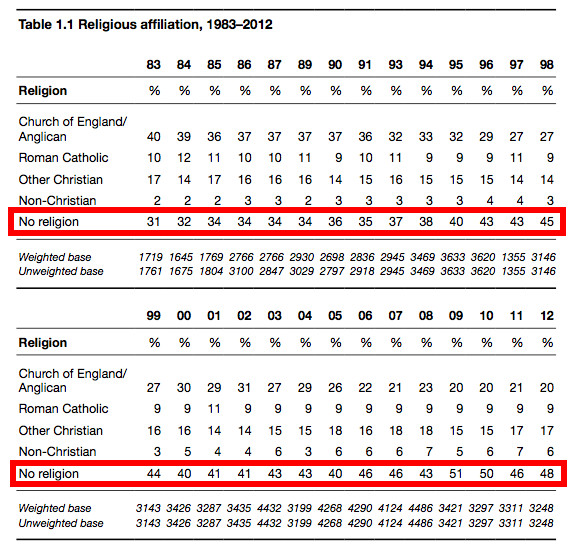 Indeed, the past few years have seen a dramatic rise in Humanist weddings in the country. It wouldn’t be surprising to learn that people with no religious affiliation actually made up a higher proportion of the population — no doubt many of those who claim they’re Christian are only saying it out of tradition, not because they actively practice the faith or really believe the mythology.

(Thanks to Emma for the link!)

October 1, 2013
The Lawyer Who Helped Remove Mandatory Bible Readings from Public Schools Has Died
Next Post

October 1, 2013 The Birth of Speaking in Tongues
Browse Our Archives
What Are Your Thoughts?leave a comment