The Kansas Board of Education (Seriously) Just Got Sued for Promoting the Teaching of Evolution September 27, 2013 Hemant Mehta

Somehow, the Kansas State Board of Education is being sued for — I can’t believe this — promoting atheism by way of evolution. You can’t even say “Kansas” and “Science” in the same sentence without including a chuckle, but this is really happening.

The group Citizens for Objective Public Education, Inc. (COPE) has filed the lawsuit because they believe the new science standards adopted by the Board of Education, which include the teaching of evolution, are endorsing an atheistic worldview: 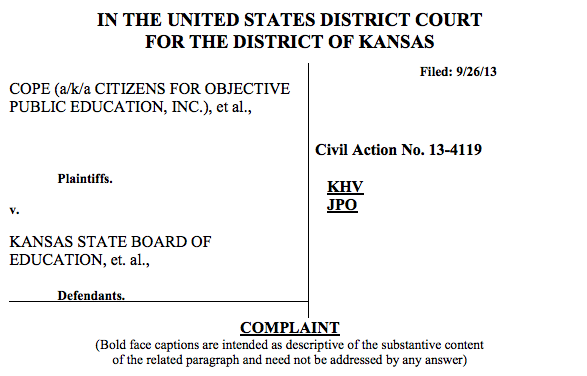 Riiiiight. Because if you’re not teaching Creationism or Intelligent Design, you must be pushing anti-Christian ideas… To be fair, the truth of evolution only allows for God’s fingerprints if you twist your theology, but the state standards are by no means pushing atheism. If you come to that conclusion because of what you learn in science class, you did it on your own.

These people know nothing about evolution, do they?

“The state’s job is simply to say to students, ‘How life arises continues to be a scientific mystery and there are competing ideas about it,'” said John Calvert, a Lake Quivira attorney involved in the lawsuit.

Of course, evolution doesn’t deal with the origin of life, only what happens after it arose. Someone who studied the theory would understand that, which takes Calvert out of the running.

He also told the Associated Press how the new science standards would brainwash children into accepting reality:

“By the time you get into the third grade, you learn all the essential elements of Darwinian evolution,” Calvert said in an interview with The Associated Press before the filing. “By the time you’re in middle school, you’re a Darwinist.”

That… would be amazing. Middle school students who get how science works? In Kansas?! If only.

The lawsuit suggests that if the federal court won’t block the standards completely, it could bar the state from implementing standards dealing with the origins of life and the universe until high school and require schools to incorporate “adequate and reasonably complete information” about those topics afterward.

Actually, the lawsuit calls for an injunction against teaching about the origins of life and the universe unless the curriculum includes:

… adequate and reasonably complete information about the following matters and is taught objectively so as to produce a religiously neutral effect with respect to theistic and non-theistic religion.

As if science requires us to be neutral to natural and supernatural explanations.

Thankfully, the people who actually understand science — and have no desire to promote atheism, I should add — are already giving this lawsuit all the respect it deserves:

Joshua Rosenau, programs and policy director for the Oakland, California-based National Center for Science Education, said Calvert has been making such an argument for years and “no one in the legal community has put much stock in it.”

“They’re trying to say anything that’s not promoting their religion is promoting some other religion,” Rosenau said, dismissing the argument as “silly.”

“This is about as frivolous as lawsuits get,” Case said.

It would be great if a judge said the same thing. Maybe, for once. the Kansas State Board of Education would be on the right side of the science debate.

September 27, 2013
Atheists Could Learn a Lesson from These Christians
Next Post