Study Shows That Young ‘Nones’ Are Not Just Spiritual Seekers

According to a new report by researchers Barry A. Kosmin & Ariela Keysar, nearly 30% of college students are “Secular” (as opposed to “Religious” or “Spiritual”).

The report is part of the American Religious Identification Survey (ARIS) series from Trinity College and was produced in conjunction with the Center for Inquiry.

So what did we learn?

The biggest finding may be that, among the students who identified as “Secular,” more than 80% didn’t identify with any religion. Neither did more than 40% of the “Spiritual” crowd.

We know that “Nones” are on the rise but the common wisdom has been that a lot of those young people aren’t really atheists. They’re more like “spiritual-but-not-religious.” Not so, says this study: 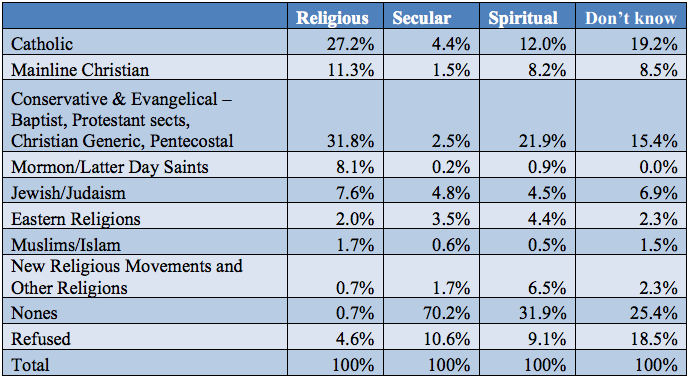 These results belie the claim that the growing population of young Nones is composed of religious searchers or the “religiously unaffiliated.” Over 99% of the students who self-identified as Nones rejected a Religious worldview and a clear majority opted for the Secular worldview.

Most of the other results are what you might expect. The “Secular” group is predominantly male. A whopping 93% of “Seculars” accept evolution while 95% support same-sex marriage. Only 5% of “Seculars” identified as Republican.

“Today’s college students are those same Americans who will soon take positions of leadership in society and in their communities,” noted Ron Lindsay, president and CEO of the Center for Inquiry, a principal funder and intellectual contributor to the survey. “It bodes well for the future of science and reason in America that almost one third of this rising generation identifies as Secular, while another third has rejected traditional dogmatic religion. Clearly, Secular Americans are a constituency on the ascent, one that both political and cultural establishments can no longer afford to ignore.”

There was one set of results I found weird and it had to do with supernatural beliefs. It turns out that even “Seculars” believe in a lot of bullshit:

September 27, 2013
The Kansas Board of Education (Seriously) Just Got Sued for Promoting the Teaching of Evolution
Next Post