According to New Report, Hispanic Adults Are Losing Their Faith As They Get Older September 27, 2013 Hemant Mehta

According to New Report, Hispanic Adults Are Losing Their Faith As They Get Older

The big highlight for us is this one:

Compared with their religious affiliation as children, the percent of religiously “Unaffiliated” Hispanic adults more than doubles over time (from 5% to 12%) — that is to say, many Hispanics are losing their faith as they get older: 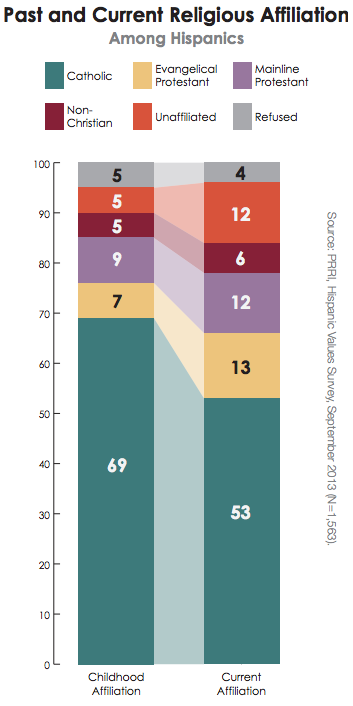 The percentage of Hispanic evangelical Christians changes by roughly the same amount, but it seems fair to say our side is gobbling up some of those young Hispanic Catholics.

When it comes to the Bible, the majority of Hispanics believe it’s the inspired Word of God, while a disappointing third see the Bible as literally true:

The full report is available here.

September 27, 2013
Study Shows That Young 'Nones' Are Not Just Spiritual Seekers
Next Post

September 27, 2013 'One Nation Under God' Banner Taken Down from New Jersey City Train Trestle
"It was introduced because we legally couldn't use "spouse" or its gendered variants."
RainbowPhoenix Tim Barton: A New Dad Just ..."
"All three times my parents had a new baby Dad took a week off to ..."
RainbowPhoenix Tim Barton: A New Dad Just ..."
"One of the Associates at my locals Vans store bought Stephen King masks from Etsy."
NOGODZ20 School’s Mask Mandate is a “Satanic Ritual,” ..."
"Ivermectin works by attacking the nervous system of the parasites, yet covidiots think that it ..."
Akira625 GOP Activist Who Compared Mask Mandates ..."
Browse Our Archives
What Are Your Thoughts?leave a comment