Secular Coalition for America Gives Cory Booker an ‘A’ and Chris Christie an ‘F’ in Latest Scorecards September 26, 2013 Hemant Mehta

The SCA gave Booker an “A” on issues of church/state separation while Lonegan received an “F”: 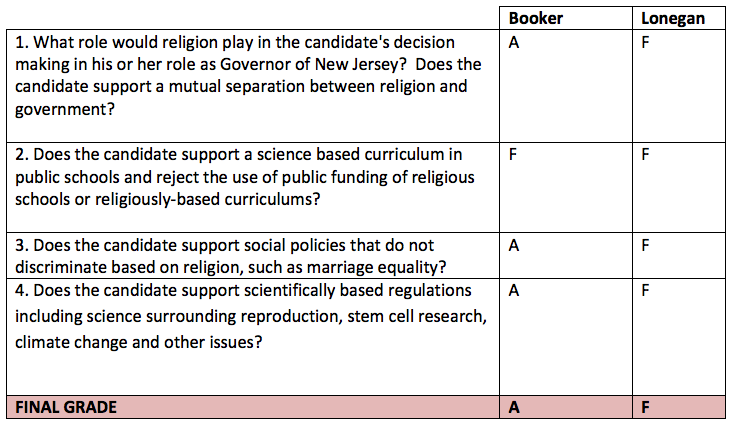 Not too surpri—whoa, what’s that “F” in Booker’s column?

It’s based entirely on statements he made in support of taxpayer-funded vouchers that would allow parents to send their children to private and religious schools, something that church/state separation advocates have fought against everywhere. He’s wrong on that issue and the SCA was right to give him a failing grade. (Booker’s composite score was a 2.25/3 which was the bare minimum he needed to earn an overall grade of “A.”)

Meanwhile, for the November 5 Governor’s race, Democrat Barbara A. Buono may be getting crushed in the polls by Republican Chris Christie, but she has him beaten on the scorecard. She earned straight “A”s while Christie failed miserably: 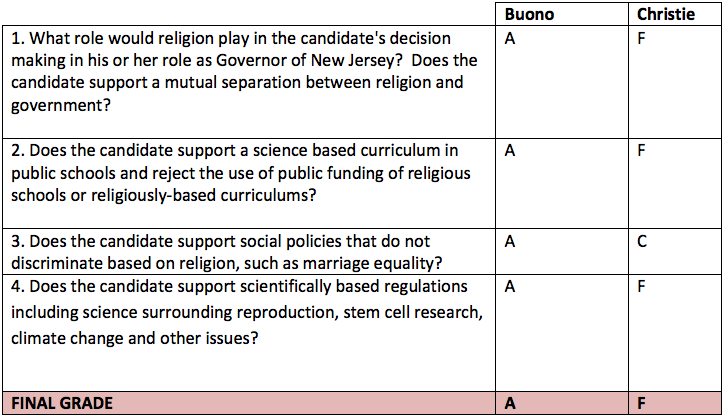 Christie isn’t opposed to civil unions, though he has vetoed legislation allowing for marriage equality.

Christie’s leading in a Kean University poll released yesterday 52%-34%. Should be an easy victory for him, unfortunately.

The SCA’s Edwina Rogers, while notably Republican herself, says her group will “work to educate and unify lawmakers on both sides of the aisle behind our country’s core secular founding principles.”

“The separation of religion and government affects all of us in a positive way — including protecting the religious from having another’s brand of religion imposed on them,” Rogers said. “These secular values are particularly important to remember and protect at the state level, where we’re seeing some of the most egregious legislation in state capitals across the country.“

As much as I would love for these scorecards to sway voters, I would assume voters have already made their decision. But for any independent stragglers who care about church/state separation, these results should point you in the right direction.

September 26, 2013
Pope Emeritus Benedict on Sexual Abuse: 'I Never Tried to Cover Up These Things'
Next Post