Last Friday, the New York Times‘ Samuel Freedman reported on Teresa MacBain‘s new job. In the span of about 18 months, Teresa went from being a Methodist pastor who secretly didn’t believe in God… to the newly-hired director of the Humanist Community Project at Harvard, where she would help form Humanist communities nationwide. Along the way, she worked for the Humanists of Florida Association and American Atheists. 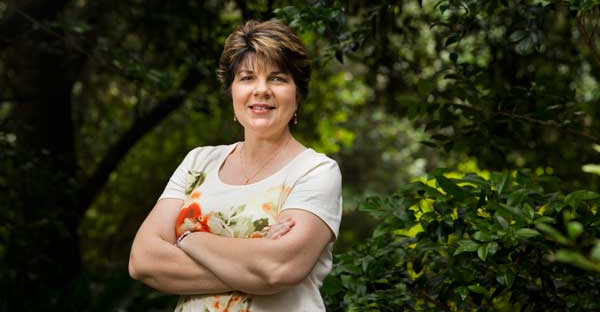 Freedman’s article included a section that I basically ignored when I first read it because it was just biographical information:

Finally, [before Easter in 2012] she realized her faith crisis was over. She no longer believed in God. The daughter of a minister, the product of a divinity school, the enthusiastic evangelist doing the Lord’s will, she told her followers that she was resigning her pulpit.

At the Clergy Project, where MacBain was the first Executive Director, the speakers list (still) reiterates that information about her educational background:

Teresa MacBain became a non-believer after more than twenty years of ministry. She started her career in ministry serving along side her father, a Baptist minister. She taught in Christian Schools, served as a worship pastor, associate pastor and senior pastor. Teresa received her bachelor’s degree from Samford University in Christian Education followed by her Masters in Divinity from Duke Divinity School.

After the NYT article was published last week, though, a Duke official contacted Freedman:

After Saturday’s article appeared, the executive director of communications for Duke Divinity School, Audrey P. Ward, contacted The Times to state that the school had no record of Ms. MacBain’s having taken graduate school classes or earning a master’s degree.

Ms. Ward wrote in a subsequent e-mail that divinity school records showed that Ms. MacBain attended a Summer Course of Study School in 2010. She took the first-year course of a five-year program for licensed pastors under appointment and working ministers that does not lead to a Duke degree.

In short, MacBain took a class in 2010 that wouldn’t have earned her a degree even if she took the remaining four classes in the program… but said on her resume that she had graduated with a Master of Divinity degree from Duke in 2005. Considering the program takes three years of full-time work to complete and MacBain’s resume says she was working somewhere else in the years prior to 2005, I’m surprised no one picked up on it sooner.

Two days ago, Freedman called MacBain to confirm what the Duke official had told him, and she confessed that she never really earned the M.Div. degree.

In a statement on Facebook, MacBain expressed remorse for what she had done: 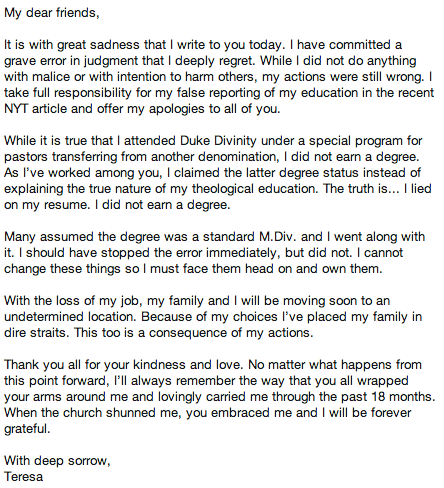 It is with great sadness that I write to you today. I have committed a grave error in judgment that I deeply regret. While I did not do anything with malice or with intention to harm others, my actions were still wrong. I take full responsibility for my false reporting of my education in the recent NYT article and offer my apologies to all of you.

While it is true that I attended Duke Divinity under a special program for pastors transferring from another denomination, I did not earn a degree. As I’ve worked among you, I claimed the latter degree status instead of explaining the true nature of my theological education. The truth is… I lied on my resume. I did not earn a degree.

Many assumed the degree was a standard M.Div. and I went along with it. I should have stopped the error immediately, but did not. I cannot change these things so I must face them head on and own them.

With the loss of my job, my family and I will be moving soon to an undetermined location. Because of my choices I’ve placed my family in dire straits. This too is a consequence of my actions.

Thank you all for your kindness and love. No matter what happens from this point forward, I’ll always remember the way that you all wrapped your arms around me and lovingly carried me through the past 18 months. When the church shunned me, you embraced me and I will be forever grateful.

Well, in her Facebook post, she writes that “My falsehood did not begin as I entered the movement.” Consider this: MacBain’s first job as an associate pastor was at Cody Community Church in Florida… beginning in 2005. I haven’t been able to verify this yet, but perhaps it’s a position she got because of what her resume said at the time.

The hard truth appears to be that MacBain has no theological degree.

The softer truth, however, may be that it doesn’t really matter. MacBain really was religious. She really did lose her faith. She really did work as a volunteer or paid staffer for a number of atheist groups over the past year and a half. She really did help people transition from religious to godless.

None of that work required a graduate school degree. Her work centered on compassion and organizing, not academia and theology. From what I’ve heard from organizations she’s worked for, she was an excellent employee. There’s no doubt she would’ve been a perfect fit for the Humanist Community Project, too, but it’s understandable from a professional perspective why the Humanist Community at Harvard had to let her go.

A good argument could be made that the degree wasn’t a reflection of her contributions and worth to the community, but we’re not the employers. I could be an amazing teacher, but if my district found out I didn’t really get my education certification like I said I did, I would be fired, too.

We at HCH have approached this situation as best we can, striving to apply our reason in the service of both fairness and compassion.

Many of us at HCH have come to care very much about Teresa as a person. We wish her the very best in the future. We will also learn a great deal from this experience as we move forward with energy and renewed determination.

Earlier tonight, I spoke with MacBain about some of the events that have transpired this week.

She was notably upset, but she and her family are doing okay. While they were planning to move into a permanent place near Harvard next week, the family will be staying with a relative for the time being until they figure out their next move.

MacBain told me that, more than anything else, she was upset about how this situation would reflect on Greg Epstein and the Humanist Community at Harvard, on the Clergy Project, and on the atheist community at large.

She added: “I was wrong. I was stupid… all I can do is admit it and try to move forward.”

What was amazing to her was that, since this afternoon’s revelation, “six people have offered [her] a home to stay in.” On Facebook, she wrote, “You guys have always cared for me in far better ways than the church ever did.”

Like I said earlier, Teresa became known in our movement for her courage in coming out as an atheist. It still gives me shivers to watch video of her just moments after telling the crowd at the 2012 American Atheists conference that she, too, was an atheist:

It’s that courage that will keep her in high esteem among atheists everywhere no matter what her credentials are (and no matter what she said they were).

She kept a tremendous secret to herself for a long time, and after she finally told people about it, it set her free.

I hope this recent revelation will give her another chance to start over. Her future may not be at Harvard but it’s hard to think it won’t be somewhere else within our movement. The letters after her name may have changed — and she admits her role in that fabrication — but the person we’ve come to know hasn’t.

The Clergy Project announced today the resignation of Teresa MacBain as a member of the Board of Directors. Given recent events, we support her decision to leave the Board and extend our thanks for her contributions to the Clergy Project.

During her time as a Board member, Teresa worked to promote the Clergy Project and its mission, and we extend our gratitude to her for these efforts.

(***Update*** 9/30/13: Edits have been made to this posting since it initially went up. At her request, a portion of MacBain’s Facebook message regarding a study she was a part of has been removed.)

September 26, 2013
So This Is How You Make a Creationist Documentary...
Next Post