Just a day after a whole host of other atheist groups submitted their joint amicus brief for Town of Greece v. Galloway, the Supreme Court case that could decide the fate of government invocation prayers, the Freedom From Religion Foundation has submitted theirs as well. 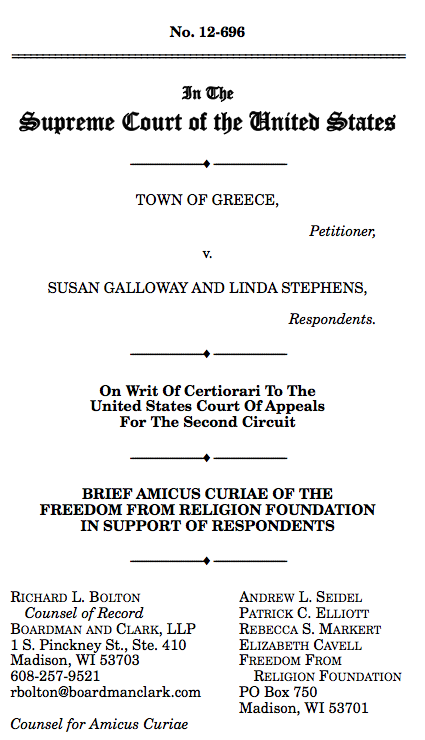 Just as the other brief did, this one focuses almost entirely on the Supreme Court case of Marsh v. Chambers (1983), the last time the Court decided a case involving government prayer.

Unlike the other brief, though, this one’s just flat-out blunt about how awful Marsh was and urges the Court to overturn it — or, barring that, to affirm the Appeals Court’s ruling against the blatantly sectarian prayers in the town of Greece, New York. It also highlights the changing demographics in our society in order to show that, even if we were once a Christian-majority country, we are no longer heading in that direction:

Marsh should be overturned. This Court’s most enduring decisions apply legal principles to overturn a long history of constitutional violations; its most tenuous decisions ignore legal principles and treat history as dispositive. Marsh does the latter. Government practices, like prayer, that co-existed with Congress’s passage of the First Amendment or other amendments are not automatically constitutional — as the Sedition Act of 1798 and segregation illustrate. Even if Marsh‘s originalist interpretation accurately reflected the framers’ views on government prayer, which it did not, that interpretation can be incorrect — as Eighth Amendment jurisprudence shows. And sometimes, a long history is simply a longstanding injustice — as this Court’s treatment of anti-miscegenation and discrimination against gay citizens demonstrates. In no other case involving the Religion Clauses has this Court placed history over principle as Marsh did.

Numerous times in the brief, FFRF’s lawyers refer to potential swing-vote Justice Kennedy‘s previous decisions — presumably in the hope that he’ll be persuaded to take a similar stance this time around as well.

The brief concludes with a quick summary of how the court should act:

… This Court should affirm the Second Circuit’s decision.

Better still, this Court should correct Marsh’s “blind veneration” of an incomplete and flawed history. This Court should follow its remarkable tradition of impartially applying legal principles to strike down longstanding historical violations. We ask that you “strik[e] down all official legislative invocations” and overturn Marsh… By ruling against legislative prayer this Court can strike a blow for the freedom of conscience of all citizens.

Oral arguments in the case take place on November 6.

September 25, 2013
We Could Learn a Lesson from These Christians Whose Property Was Vandalized
Next Post