See? It’s Not Just Atheists Who Want to Eat Babies

I don’t know what makes people want to do this research, but it’s nice to have a scientific explanation for my desires: 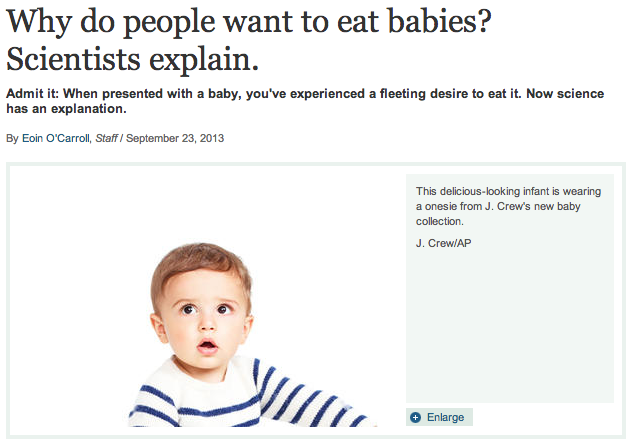 If you’re like most normal people, you’ve briefly considered eating a baby or two.

Why is that, anyway? Why do babies always seem so delicious, even when you’re not particularly hungry? Using brain scanners and pajamas, an international team of scientists is closing in on a answer.

Apparently it has something to do with the way babies smell…

To be fair, the actual article is much more about how the smell of baby impacts how women bond with them and how those neural pathways are the same as those triggered by certain foods and drugs:

Taken together, these data suggests that body odors from 2 day-old newborns elicit activation in reward-related cerebral areas in women, regardless of their maternal status. These tentative data suggests that certain body odors might act as a catalyst for bonding mechanisms and highlights the need for future research on odor-dependent mother-infant bonding using parametric designs controlling for biological saliency and general odor perception effects.

But forget that. The headlines say it’s an explanation for why we want to eat babies. So have a delicious one today… for SCIENCE!

(Thanks to *way* too many of you for the link)

September 23, 2013
Searching for Atheist K-12 Teachers Who Fall Into These Particular Demographics...
Next Post

September 24, 2013 Even Today, Jessica Ahlquist is Facing Condemnation for Her Successful Lawsuit
Browse Our Archives
What Are Your Thoughts?leave a comment