Mark Joseph Stern and the Conversation He Won’t Have About Circumcision September 23, 2013 Hemant Mehta

This is a guest post by Francelle Wax, the producer of American Secret: The Circumcision Agenda, a documentary about the problems with male circumcision.

[Note: Last week, Mark Joseph Stern wrote an article for Slate about how anti-circumcision activists (“Intactivists”) are “drowning out reasoned discourse” in the debate. This piece is a rebuttal to that.] 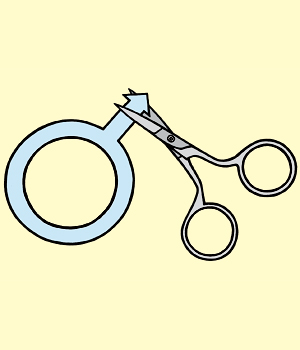 I think that the best way to respond to Mark Joseph Stern’s address is to deal mostly with Mark Joseph Stern and barely at all with his address. Not because I think it generally good practice to go around making internet fights personal, but because I have little patience with someone who is pretending to have the objectivity of a cool academic when he actually harbors an intensely vested interest in arriving at a particular conclusion because the stakes are both so high and so intrinsically personal.

I do not know Mark Joseph Stern. But I can likely assume two facts about him, each of which in isolation are reason to be highly confident of his circumcision status; together, the likelihood is even greater. 1) Stern was born in North America when circumcision rates among the general population were at an all time high, and 2) his last name is characteristically Jewish. Given this, it would be highly surprising if Mr. Stern were not circumcised. Why am I telling you this? Because it’s relevant. Am I insinuating that circumcised men are incapable of being impartial on this issue? I don’t have to, the data says it outright. American doctors consistently diverge from their developed world counterparts when it comes to how they interpret circumcision studies, whether having to do with infection statistics, disease transmission rates, pleasure reduction, or any other findings. American doctors lean pro-cutting, to the renewed shock and at times amusement of the global medical community. (The majority of American females are equally compromised, hearing from a young age that the male foreskin is a conduit for dirt and disease, leading them to grow into mothers who readily consent to circumcision of their sons and into doctors who peddle the procedure to the parents of their patients.)

Now certainly in medicine, differences in opinion do occur. One doctor may advise a patient to go ahead and schedule back surgery while another doctor up the street cautions this same patient that the surgery is likely to create more problems than it will solve. But with circumcision, the splintering is clearly along a national divide.

Lets look at incentives Stern (and others) may have for wanting to avoid confronting the realities of the procedure.

Like most circumcised men, Stern probably does not want it to be true that his circumcision means that he is missing out sexually. Or that as he ages, he will likely notice diminishing sensitivity in his glans. Or that profit incentives played a role in the push to remove his erogenous tissue; or that other people altered his sexuality in a permanent way when he was still too young to do anything about it.

But the facts are what they are.

Over 50% of penile nerve endings are removed during a circumcision, including one-hundred percent of the Meissner’s Corpuscles, the unique fine touch nerve receptors found only in fingertips and on the ridged band of the penis.

Mucous membrane exposed to the air for decades does callus.

And it is true that your circumcision means that someone surgically altered your body in a permanent way without first having obtained your consent.

Wouldn’t it be nice to be able to believe that all of these sacrifices were not in vain, that they bought you some greater good? It would, but we can’t just believe things because they are appealing. We can’t in good conscience marinate in denial when that means asking future generations to pay the price by allowing a harmful practice to continue to play out on their flesh.

We recognize in this country that there is such a concept as “a conflict of interest.” We acknowledge that people’s abilities to be objective in their evaluation of facts is typically impaired by emotions and conflicting loyalties coming into play, and that emotions run high when there are personal stakes.

We make provisions for this in law; we require that a judge recuse himself from a case when the defendant is his next door neighbor. We enforce it in politics, ousting a congressman who awards contracts to a company that has contributed to his campaign. We made these laws because we all grasped at a young age — when the most spastic and uncoordinated kid in Little League got to be pitcher due to an immutable appointment by Coach Dad — that personal longings tend to crowd out and trump objective judgment. It isn’t news that people’s private agendas inform what they see and what they screen out. This is particularly likely to happen in any situation where there is a high cost to admitting to having been wrong.

My suggestion that doctor’s employ denialism around circumcision doesn’t mean that I am charging them with being cruel and inhuman. Quite the opposite; it is acknowledgement that they are oh-so-very-human in their determination not to have to admit to having been wrong. A measure of sympathy belongs with doctors, the majority of whom did indeed set out to do good when they began their training. It is understandable that they may be angry at having been misled by their professors who taught them that proper medicine includes routine circumcision. Today’s physicians happen to belong to the generation that has finally begun to question this practice in serious numbers, and now they are left carrying the bag packed by their predecessors, replete with Gomco clamp and all. It isn’t an enviable position to be in and one can understand why they are on the defensive. No decent person wants to have the realization: “So this irreversible procedure I’ve performed on thousands of patients… turns out that was a bad idea. Oops.” They would rather it be true that circumcision is the prophylaxis and wonder drug to treat and prevent a whole host of ills. Which means that, when reviewing studies about circumcision, American physicians are poised to pounce on any shred of data which could be contorted to justify this surgery that they feel beholden to defend.

It’s incumbent upon us to always remember to ask: Who are the proponents of this practice? Are they capable of being impartial? What might it cost them to admit that they are wrong? Do they have a vested interest in arriving at a particular conclusion?

Speaking of risk assessment, does Stern really think that Americans are the only people who care whether or not a rampant epidemic breaks out in their country and that, by keeping their boys intact, the rest of the world has resigned itself to a fast and furious demise? Is he actually saying that the Australians don’t mind all that much whether or not they all contract HIV? That the Dutch shrug off the prospect of a generation ravaged by cervical cancer with nary a second thought? Does he expect readers to suppose that only America seeks to thrive and prosper and that everyone else has got a death wish?

I might add that even were this most outlandish scenario true, then the other nations are failing miserably in their morbid quests, given that they outperform the USA when it comes to rates of infection and disease transmission.

It seems far more probable that the intact nations have calculated the risks and concluded that the pleasure and sensation which would be sacrificed in exchange for a marginal measure of prevention is nowhere near worth it. As foreskin-havers, and the partners of foreskin-havers, it’s worth listening to them. They’ve done the research that many Americans have ignored or dismissed. And it’s all too easy for us in the United States to never value what most of us have never enjoyed.

September 23, 2013 Southern California Atheist Group Helps to Clean Up a Riverbed
"Post Trump Satisfaction Disorder?"
wreck What Message Did Biden’s Religious Inauguration ..."
"You crack me up."
jomicur Arsonist Burns Down Church of Satan’s ..."
"But then you'll have to groom your watch list! Shaving, haircuts, perms..."
Andy Horsuroddinon Angry Christian Mom Condemns “Graphic and ..."
"I brunch?"
InDogITrust Angry Christian Mom Condemns “Graphic and ..."
Browse Our Archives
What Are Your Thoughts?leave a comment