Brian Boyko is running for Texas State Representative in a Republican-held district and, while that seems like an uphill climb, there are still good reasons to support him.

For one, he’s a self-described geek:

Also, if you want to donate to his campaign, you have to give a Fibonacci number dollar amount: 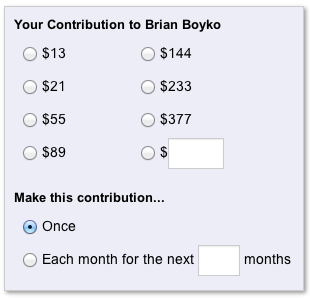 But here’s the kicker: He attended the Texas State Board of Education meeting this past week at which they were discussing which textbooks should be adopted by all public schools. Considering how we know that science textbooks were reviewed by Creationists, it was important that pro-reality citizens advocated for textbooks promoting proper, evidence-based science.

Boyko wasn’t just there to lend his support, he spoke out in favor of good science — something we’re not accustomed to seeing from possible Texas politicians — and he did it without slamming religion at the same time:

[St. Thomas] Aquinas also said that “wonder is the desire of knowledge” — and both Science and Philosophy seek to fulfill that desire. But Science has a limit — science is limited only to human Reason. Anything that transcends human reason, therefore, cannot be science.

And to attempt to force the Divine — which transcends reason — into the small confines of reason alone, not only makes a general mess of Science, but also diminishes the Divine. To lower the supernal to the study of the terrestrial is, well, blasphemous.

The Bible has a place in schools; that place is in literature and philosophy. But not science.

Boyko admits the speech may not have accomplished anything, but “you have to try.” On his website, he elaborated on where he stands on this issue:

The problem is, within any scientific body of merit, evolution is not under controversy. Certainly the methods by which evolution manifests can be; but to say that evolution isn’t real is to be blind to the mountains of evidence that support the theory; while “intelligent design,” or “creationism” isn’t supported by any scientific evidence at all.

Let’s be frank for a second: Faith is a powerful motivator. It is very hard to convince someone that they’re wrong on the facts when they believe it is a moral duty to insist their side is right.

Because to a believer, faith is a virtue. Indeed, the highest virtue. And evolution may not challenge God’s throne, but it challenges a highly held belief that God created man as the apex of life on Earth. To suggest that man holds no special place amongst the beasts — that our rationality was not the spark of divine creation but the machinations of blind terrestrial navigation belies the idea that God places us first among all his creations.

And it humbles us. It humbles us because there is no guarantee that mankind will or can remain the apex of God’s creation, and that should we falter and face ecological or nuclear Armageddon, He may save our souls, but not our species.

Some people, quite frankly, can’t handle that.

Wow. Very frank, very blunt, and the kind of rhetoric most candidates for office would never use out of fear they would alienate their religious voting base — certainly, that worry would be magnified in Texas. But not for Boyko. He’s trying to play both sides of the spectrum and he doesn’t do all that bad of a job of it.

Like he said, the Texas State Board of Education probably won’t change its mind based on the statements made earlier this week, but how great would it be to have a voice like that on our side?

If you like what you hear, consider donating to his campaign.

(Thanks to Dan for the link!)

September 21, 2013
Grandmother Demands Resignation of Elementary School Teacher Who (Supposedly) Told Her Grandson That There's No God
Next Post

September 21, 2013 Vatican Excommunicates Priest for Supporting Ordination of Women and Gay Marriage
Browse Our Archives
What Are Your Thoughts?leave a comment