In a frightening-yet-not-at-all-shocking article in the Chattanooga Times Free Press today, Stephen Hargis reports that the number of football coaches who think preaching Christianity is part of the game plan isn’t just a single individual or even a handful of people. The problem is much worse than that:

Responding to a Times Free Press survey, 32 coaches who work in public schools in Tennessee, Georgia or Alabama professed to be Christian; all said they endorse some form of team prayer. Those coaches said they consider the increased activity by the Wisconsin-based foundation a violation of their religious rights and of their ability to mold the boys on their team into moral young men.

“We as coaches fail if we only teach football, so we try to set an example of how a Christian man handles any situation,” Ridgeland High coach Mark Mariakis said. “I want the kids to remember that example more than anything they learn on the football field.”

If that name is familiar, it’s because Mariakis is the coach from Georgia who led his team in prayer before and after games: 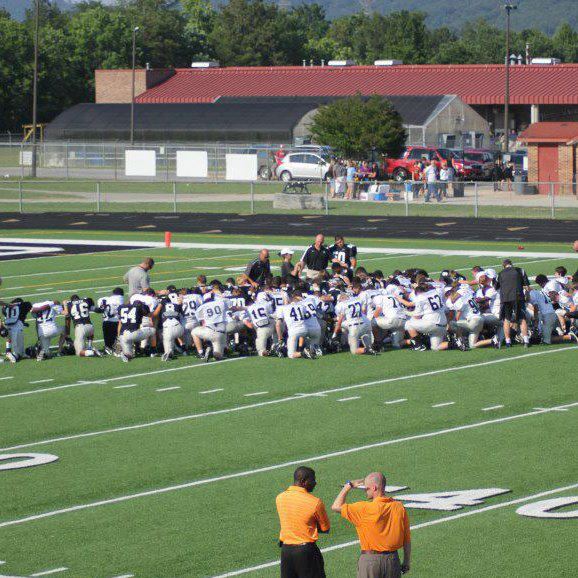 Mariakis notes that the only thing that has changed since last year is that he has stopped leading the team prayers. Now, he lets the students do it. (Are they the captains? I don’t know, but I’m guessing that’s probably the case since he calls them the team “leaders,” which makes the prayers all the more coercive to the rest of the team.)

Can you believe that, though? 32 coaches are admitting to illegally preaching Christianity to their players (and who knows how many didn’t admit it). These coaches are setting their districts up for losing lawsuits because they’re blissfully unaware of what the law allows — or they’re completely aware of what the law says and they just don’t give a damn.

While the schools stopped PA prayers, they all continue to allow students and fans to meet on the field before games to pray. Two weeks ago, when Marion County’s Warriors visited cross-county foe Whitwell, the two fan bases set aside their rivalry to form a prayer circle that stretched around the entire field before the game.

Whitwell coach Billy Barnhart said he still conducts prayer before and after each day’s practice as well as prayer in the locker room before taking the field each Friday.

This is what happens when you’re in the majority. You’re completely oblivious to what everyone else is going through.

I’m a public school coach, too, and I’m an atheist. But if I were in these coaches’ shoes and telling my students not to pray before a game because God isn’t running our offense, there would be an uproar. Thankfully, I know where my personal beliefs have to take a backseat to doing what’s right for all of my students and not just the ones who agree with me. That means not pushing my views on my students, who would really have no choice but to nod their heads or risk losing playing time or getting kicked off the team. Even if I believed every student on the team thought the way I thought, it would be wrong to push my beliefs in a public school setting. If these coaches think their religious beliefs should take precedence over the law, they should go teach at a private Christian school.

The end of the article features a Muslim student on one of the teams:

Of the 82 players on Central High School’s roster, junior kicker Tareq Faleh is the only Muslim, surrounded by predominantly Christian teammates. But the debate over religious freedom and whether prayer should be a part of Friday night football hasn’t affected Faleh’s enjoyment of the game. When the team gathers for prayer, typically led by a member of the Fellowship of Christian Athletes, Faleh joins the rest of the Purple Pounders in bowing his head.

“I’ve never been uncomfortable with any of it or felt left out, even when they pray something in Jesus’ name,” Faleh said. “It’s always positive stuff and it’s interesting to hear how other people believe. Everyone should be allowed to pray however they want and express what they believe. That’s what makes this country so great.

“To me, I’m a part of this team, so I join my teammates because that’s what they want to do and I bow out of respect for them. I always want to be there for my team because I know they would be there for me. That’s what being part of a team is about.”

Students, of course, are allowed to pray however they’d like. The problem occurs when there’s pressure to pray because everyone else is doing it, including the people in leadership positions on the team.

You’d be seeing a very different end of the article if Faleh didn’t capitulate to the Christian prayers but actively opposed them. I mean, what else would anyone expect him to do? Trash his teammates? Stand up for Islam in the face of overwhelming Christian pressure? No. He knows better than that.

As Katherine Stewart once wrote of non-Christian athletes in The Good News Club:

… they know that the locker room is no place for dissent, and that a refusal to participate could easily be construed as a lack of commitment to the team. They have learned that they have to pray to play.

A good coach would know that.

By the way, there’s a separate article featuring quotations from the 32 proselytizing coaches about their takes on prayer. So much fail throughout:

“When we lock hands after a game or practice, prayer starts. Are we doing anything negative to affect a kid? Those people [Freedom From Religion Foundation] are in the minority of our society. It’s time for the majority to step up and tell them they’re infringing on us. What they don’t understand [is] it’s freedom of religion, not freedom from religion. One of the reasons society is so jacked up, you’re attacking people who are trying to do something good and wholesome for kids.”

“As coaches we pray in my office before every game and the players have a student-led prayer in the locker room. We’re in the Bible Belt and we’re still going to pray. If somebody wants to stop what we’re doing, they’ll have to get into our locker room, and I don’t let people I don’t know into our locker room.”

“We pray the Lord’s prayer before games. I pray with them every chance I get, and I’ll keep doing it until they tell me I can’t. A lot of our players don’t attend church, so it’s very important for me to live it. We should be urgent about leading these young men to Christ. If they tell me I can’t do it and work here, I’ll go find somewhere else to work.”

“This is a very faith-based community. I always said I’d quit coaching when they didn’t let me pray with the kids.”

“We do a lot of praying, and we’ve never had an issue over it. We do it on practice days and before and after games.”

September 20, 2013
Christian Writer Argues Against Disabled People Having Sexual Surrogates Because, You Know, Jesus
Next Post