Attending a Religious Wedding? Let’s Hope It’s Not As Bad As These September 19, 2013 Terry Firma

Attending a Religious Wedding? Let’s Hope It’s Not As Bad As These

Maybe not news, but news to me: The Church of Jesus Christ of Latter-day Saints wants U.S. members to marry in ceremonies that exclude literally everyone who is not an active Mormon adult. As an apparent form of spite, Mormons who want to have both a civil ceremony (that all their friends and relatives can attend) and a Church-sanctioned one (for sufficiently pious Mormon folk only) will have to wait a year for a temple marriage. Slate quotes a former Mormon, Jean Bodie, who knows whereof she speaks, having spent 35 years in that faith. “Rejecting and excluding your inactive or nonmember family is a mark of being a good Mormon,” she says unreservedly. 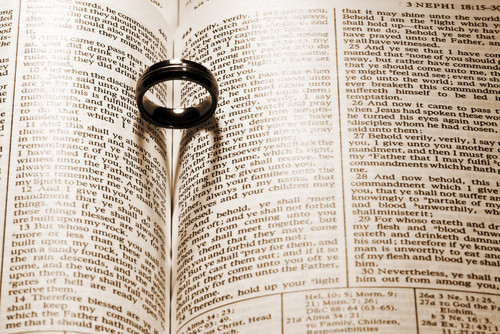 For some Mormons, this means soul-searching, awkwardness, and some degree of social unpleasantness:

Wendy Reynolds of Kenmore, Wash., said that she saw the matter in a new light when she went from being excluded to doing the excluding. “I was a bridesmaid four times without being able to attend the ceremony,” Reynolds told me. “It wasn’t a big deal because I knew all along that I wouldn’t be able to go. I didn’t think it was strange until I was getting married myself and had to leave several of my closest friends and the majority of my family off the ceremony list. I was married 20 years ago, and I’ve never recovered from this.”

I just came across this recent video of a pastor going off on a videographer and photographer. It’s hard to know what came before this, but it doesn’t look like either of them were in a place where they shouldn’t be.

“This is not about the photography. This is about God!”

I’ve been to more than my fair share of weddings, and I’ve never seen an officiant get upset like this — in the middle of the ceremony no less. By reacting as he does, he spoils the “solemn” occasion a lot more than a couple of quiet guys with cameras do. You can see the bride and groom tense up. The same happened, probably, to all the guests. A sweet moment, a lifelong happy memory in the making, is now marred by childish territorial behavior and outright negativity.

If “this is about God,” why would this pastor make it about himself and his needs instead? I’m extra-surprised because the ceremony didn’t even take place in church, his personal fiefdom. It’s an outdoors wedding. (Maybe he’s just upset that the photographers no doubt get paid a lot more for being there than he does!)

What was the most uncomfortable religious wedding you’ve ever attended? Please share in the comments!

September 19, 2013
A Preacher's Kid Who Went Through a Rough Childhood Offers Advice to Pastors
Next Post