Welcome to “Jeopardy!: Special Edition.” What’s special about it? Instead of one clue, you’re getting three! Let’s begin.

You got it. Ready? (1) If your daughter goes here, she will attract the wrong types of men, (2) she will succumb to an inherently sinful environment, and (3) she will regret it.

What is a crack den?

Oh, too bad. I’m sorry. The correct answer is, “What is college?”

The most recent religiously-inspired advice to keep women from going to college comes courtesy of Raylan Alleman (below, with his wife Missy), the co-founder of the Catholic website Fix the Family. And I haven’t done him justice, because Ray actually has eight reasons, not just three, to deny a higher education to the ladies. You can read all of them here. 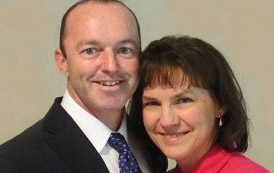 The gist of it is, in part, that even if the women excel in college, they’ll attract irresponsible, lazy, mooching men who’ll want to marry them. (For some reason, women are unable to resist the type, I guess.)

Also, college is a place where young people have been known to have… you know… relations. (Unsupervised, even!)

Furthermore, Ray, who wants a world of Catholic-approved sex only, is concerned that the expense of a college degree is keeping couples from making love the right way, which could mean that

… parents may avoid having more children [by using] contraception, sterilization, or illicit use of [natural family planning] to bear this cost.

Ray knows that his take on the whole college thing is a hornets’ nest; evil feminists and other godless progressives badmouth him all the time.

Probably the most controversial and rejected position we have at Fix the Family is that parents should not send their daughters to college. It is even more vehemently opposed than the submission of wives to their husbands.

Both of these positions we have are a threat to the trophies of the feminist agenda, so the rejection we receive is always emotionally charged and ends up insulting, since once explained logically, the opposition runs out of substance and is only left to hurl insults and presume and misconstrue this practical wisdom into some chauvinistic evil.

Ray, you see, is no stooge. He’ll have you know that he’s okay with a woman using her brain. Perhaps even for more, he intimates magnanimously, than merely balancing the family checkbook.

I strongly believe girls and women should be educated, first and foremost in the Catholic faith.

Yeah. Wow. That’s kind of the mother of all caveats right there.

If we look comprehensively at the Catholic doctrine, we’ll see very little that promotes a woman working outside the home. Further, a good working knowledge of the basics for today’s culture and progressive society can be learned in 12 years of school.

In other words, a high school diploma for girls is more than enough.

The beauty of Ray’s vision is that it doesn’t matter that high school grads have limited career options and restricted earning potential, because he doesn’t want women to work outside the home anyway. In his mind, this position is all about “Resurrecting Manhood Today,” a term that might one day be a slogan for a Viagra campaign, but that for now is Ray’s title for his YouTube series of lay sermons in which he excoriates women with worldly ambitions.

I wonder if Ray would truly prefer a world from which the contributions of working women have been expunged. A world without Marie Curie, Ella Fitzgerald, Dorothy Parker, Margaret Mead, Harriet Tubman, Rosalind Franklin, Sacagawea, Dorothea Lange, Lise Meitner, Georgia O’Keefe, Glenn Close, Germaine de Staël, Florence Nightingale, Audrey Hepburn, Jane Goodall, and more than 40 female Nobel Prize winners. Of course, it would also be a world without Catholic superstars like Saint Catherine of Siena and Joan of Arc and  Mother Teresa.

September 13, 2013
Where Should We Draw the Line on Tolerance for Religious Practices?
Next Post