I Have a Soft Spot in My Heart for the Teen Exorcists September 13, 2013 Jessica Bluemke

Watching these three young ladies — Brynne Larson and Tess and Savannah Scherkenback — interact and chit-chat, I have surprisingly mixed feelings: 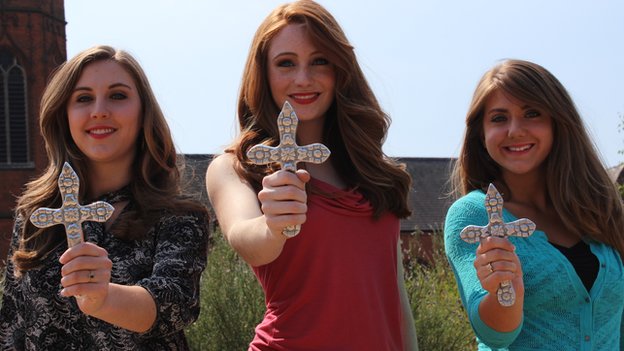 They believe they can exorcise demons and they demonstrate their “talents” in front of massive, global audiences. And while I think their beliefs are crazy weird, I see a bit of my own teen self in them.

If you can’t see the video, these three young ladies are going for a horseback ride (I am a rider, too!), bonding over their martial arts class (I mean, I took much-less-practical dance classes, but we’ll call them similar), and just being girlfriends.

My point is, there’s something about teenage girls that makes me relate to them and, therefore, want to kind of forgive them for their silly beliefs.

I mean, when I was 17, I sincerely believed that I would be a famous actress (I forgot to be talented or weirdly beautiful), I believed that the fact that I didn’t know the order of the presidents was really going to hold me back in my professional career, and I believed that quicksand was actually going to be a thing to worry about as an adult.

My point is, 17-year-old-all-of-us was considerably dumber — or, at least, less worldly — than current us. So such a huge part of me wants to take their bananas-ness with a grain of salt.

But then… but then they talked shit about Harry Potter. And that doesn’t fly ’round these parts.

One girl: The spells and things that you’re reading in the Harry Potter books? Those aren’t just something that are made up. Those are actual spells. Those are things that came from witchcraft books…

Um… you think that J.K. Rowling actually wrote actual spells into her actual best-selling series, yet it didn’t result in a whole bunch of snakes escaping from their zoo exhibits or glasses inexplicably healing themselves or various items flying about? Sure…

Look: What you’re doing is completely messed up and deceptive and has the possibility of really damaging people. It doesn’t help that you’ve been trained by Reverend Bob Larson, who is Brynne’s daddio and has claimed to perform over 15,000 exorcisms himself:

(During this video at 2:07 one of the girls asks the demon “Are you Chinese?!” and it made me laugh/cringe/feel uncomfortable.)

According to the BBC — which is paying these people to say things on TV to an audience of other people who will hear those things — the young ladies see themselves as “freedom fighters.”

They don’t think that their nonsense is meant for entertainment, either. Brynne told the BBC that it is serious business:

Honestly, I’ve never tried to do any showmanship at all, I’m just demonstrating the power of God. We’re not doing it to play up to the cameras. I’ve seen some amazing things in private with nobody there.

Listen, BBC, as an Anglophile, I thought better of you. You’re the network of Doctor Who, Sherlock and QI. I want you to be better than this! (I’m choosing to ignore the fact that there have been 14 series of Big Brother.)

Oh yeah, and they’ve all been “awarded places at college.” Which I assume means they’ve been given scholarships to study at Bible-thumpin’ colleges. Which is weird because, according to Brynne, they don’t even have time for schooling.

With going [to] over 20 countries and stuff, I don’t really have time to go to school, but I’ll just sit at my desk and work on calculus or read all my books. This is so much better than going to a stinky old school room.

“Teen Exorcists” premiered September 12 on BBC Three. Any of our UK readers are encouraged to post their reactions here.

September 13, 2013 Comedian W. Kamau Bell: 'Atheism is Like the Highest Level of﻿ White Privilege'
Browse Our Archives
What Are Your Thoughts?leave a comment