In a move that has been criticized by English-Canadian politicians as “playing identity politics,” the provincial governing party of Quebec has unveiled plans to institute a Quebec Charter of Values that will bar most symbols of religious observance worn in public service.

For the secularly-minded, it’s tempting to celebrate the Parti Quebecois for their efforts at enforcing church-state separation… Until you look more closely at the rules being proposed. 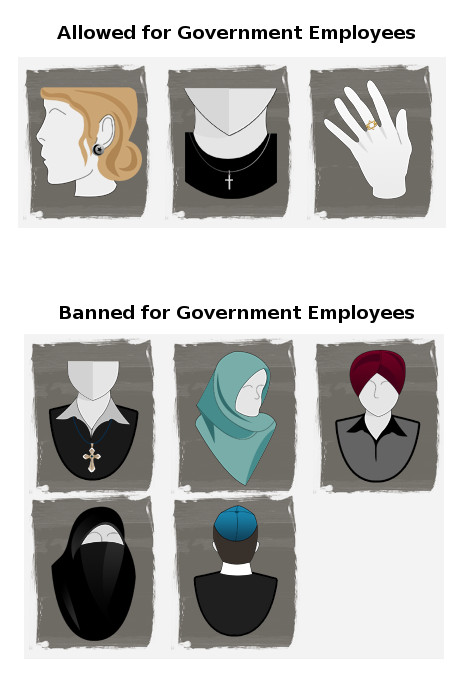 Some religious symbols are seen as more acceptable than others, mostly because they are small, unobtrusive, and easily concealed. The “acceptable” items include small, modest pieces of jewelry featuring a cross, Star of David, or other religious symbol. Items deemed “unacceptable” include Sikh turbans, Jewish kippahs, and Islamic head coverings like the hijab and niqab. In other words, the faith symbols typical of Quebec’s Judeo-Christian history are — coincidentally, I’m sure — mostly acceptable, but symbols of “immigrant faiths” are banned.

Oh, and certain religious symbols — specifically the crucifix and Christmas trees — are permitted as “a symbol of Quebec’s cultural heritage.” The stated goal is “religious neutrality”… but clearly some religions are considered more neutral than others.

That sends a message to Quebec’s non-Christian population. “The perception of the government’s message is, ‘We want you here, as long as you stay completely invisible’,” says Haroun Bouazzi, a representative of the Association of Muslims and Arabs for Quebec.

It’s not just religious minorities in Quebec who lose, however. The strict rules affect everyone who consumes public services, as competent and qualified professionals who feel forced to choose between their religious convictions and their livelihood flee to other provinces. The public-sector workers affected by this proposed legislature include educators, medical personnel, and law enforcement officials.

As a minority party, the Parti Quebecois will need opposition support to pass the legislation, and it’s not clear whether such support will come easily. Certainly the major federal parties have all expressed their misgivings, and Multiculturalism Minister Jason Kenney has vowed to pursue justice on any violations of the Canadian Charter of Rights and Freedoms. This is a provincial issue, however, and opposition parties will feel the pressure: Quebec’s largest polling firm, SOM, finds support for the proposed charter growing.

“The time has come to rally around clear rules and common values which will put an end to tensions and misunderstandings,” declared Bernard Drainville, Quebec’s Minister of Democratic Institutions. It sounds glowing on the surface, but the “clear rules” outlined in the Charter have nothing to do with common values shared by all Quebecers; it blatantly ignores the values of the religious minority and the larger Canadian value of multicultural tolerance. Nor is the legislation likely to put an end to tension being felt by people who don’t subscribe to the religion of Quebec’s “cultural heritage.”

Instead, Noa Mendelsohn Aviv called for a more tolerant, multicultural view, speaking on behalf of the Canadian Civil Liberties Association:

If we want to have diversity and equality in our society, we need to have diverse leaders, we need to have diverse role models. This proposal would essentially say that’s not possible, a person has to hide aspects of their diversity and certain people won’t be able to fill those roles at all… I think that it violates values that many Canadians and Quebecers hold dear — the rights to freedom of expression and freedom of religion, the right to autonomy and to make your own choices and — very much — the right to equality.

Let’s hope her perspective wins out.

September 12, 2013 This Pro-Life Christian Website Has an Unusual Commenting Policy...
"From.the Pansexuality article:Pansexuality may be considered a sexual orientation in its own right or a ..."
RegularJoe Church Fires Pastor Who Received Drag ..."
"What a waste."
Zizzer-Zazzer-Zuzz A Viral Video of a Guy ..."
"FA will be around. Just not on Patheos."
NOGODZ20 The Future of Friendly Atheist and ..."
"Progress is made one funeral service at a time."
SltryPrNstyBrtsh&Shrt Church Fires Pastor Who Received Drag ..."
Browse Our Archives
What Are Your Thoughts?leave a comment