The Cross Must be Removed from the 131-Year-Old City Seal of DeLand, Florida September 11, 2013 Hemant Mehta

The Cross Must be Removed from the 131-Year-Old City Seal of DeLand, Florida

This is the city seal of DeLand, Florida: 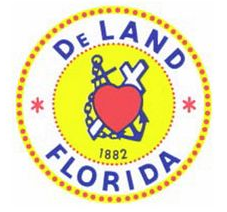 There’s a heart, an anchor, and a cross. One of those is a problem. But until now, no one has ever taken serious action on it.

Acting on a complaint from a local resident, Americans United for Separation of Church and State sent a letter to city officials late last month asking them to reconsider their seal because of it’s endorsement of Christianity. They haven’t received a response yet, but the media and Christian Right are flipping out:

“This seal is part of the very founding seal of the city of DeLand. It’s 131 years old,” says Staver. “No one has ever complained for 131 years until the Americans United for Separation of Church and State filed this letter.”

“And if it does [reflect Christianity], it still doesn’t matter from a constitutional standpoint. It’s been in existence for 131 years,” says Staver. “You would obviously think that if it’s an establishment of religion, it surely would have established one by now. And I know of no established religion in the city of Deland.”

That’s precisely the sort of thing that could be said only by someone who’s in the majority and intends to keep it that way.

Staver’s argument is about as weak as can be — “It’s always been this way, so it must always be this way!”

We know, though, that when there’s a Constitutional wrong, it must be fixed no matter how long it’s been going on, and courts tend to agree. (By way of example, the religious mural that Jessica Ahlquist fought against was up for 50 years before it was taken down, and her critics also cited “tradition” as a reason to keep it up.)

When you look at the DeLand seal, it’s obvious that it features a Christian cross. It’s one of those things you might not notice unless you’re not Christian. It’s a seal that suggests non-Christians aren’t really part of this community. That’s what Americans United is trying to change.

And in Staver’s world, if the government isn’t promoting his faith, it is automatically against his faith.

If the DeLand officials are smart, they’ll make the change without delay and save the taxpayers money that will inevitably go down the drain by fighting this.