This November, Virginians will be electing a new governor, and the Secular Coalition for America has just released a scorecard on the candidates.

(Go ahead: Try predicting this one. I promise you’ll be 100% accurate.)

The full scorecard goes more in depth, but the final rankings are right here: 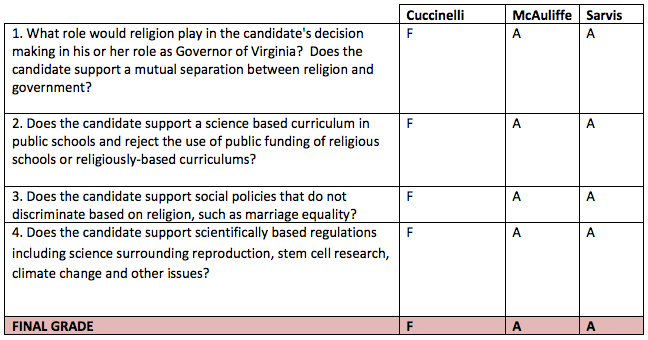 And that’s *before* you even take into account that his running mate (albeit one he didn’t choose himself) is E.W. Jackson, a guy who thinks evolution is a lie and sin leads to birth defects.

McAuliffe is Catholic, in case you were wondering, but he appears to be a firm advocate for church/state separation. Think Progress notes of him: “You wouldn’t know from any of his current campaign materials that this strong faith has any bearing whatsoever on what he believes in politically.”

Edwina Rogers, executive director of the Secular Coalition for America and, notably, a Republican, states:

“From education, to science in the public sphere, Cuccinelli’s policy views exemplify everything that stands in the way of a religiously neutral government — he even attempts to insert his religious views into Virginians’ private bedrooms… The separation of religion and government affects all of us in a positive way — including protecting the religious from having another’s brand of religion imposed on them. Cuccinelli is a threat to that most basic American value.“

According to Real Clear Politics, McAuliffe leads Cuccinelli in the polling 46%-38%.