Finally Cancer-Free, an Atheist Has Found Ways To Donate to the Places That Helped Cure Him September 9, 2013 Hemant Mehta

Finally Cancer-Free, an Atheist Has Found Ways To Donate to the Places That Helped Cure Him

I met 23-year-old Matt Skeens over the summer at the Secular Student Alliance conference. I knew he was a great activist but I had no idea he had spent the past decade fighting cancer — Hodgkin’s lymphoma. He just went back for his last check-up at St. Jude Children’s Research Hospital in Memphis, Tennessee, and I’m happy to say he’s finally and officially cancer-free 🙂

Of course, he didn’t just go back for a last check-up. He visited the nearby Ronald McDonald House with a present: a giant collection of aluminum can tabs that ended up filling a 10-gallon barrel (and half of another): 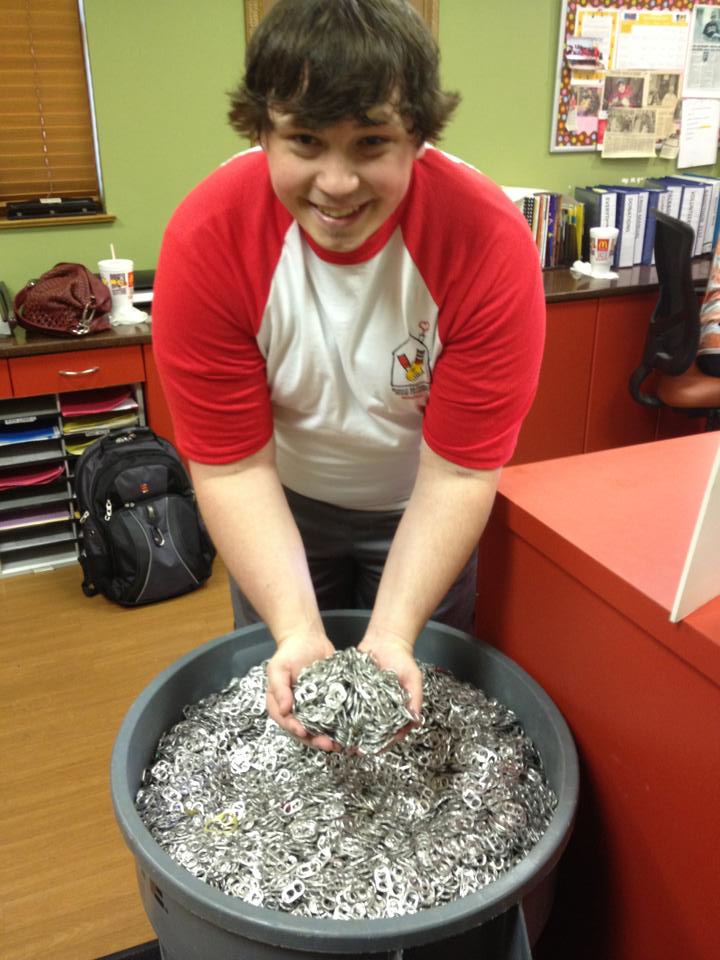 Those tabs will be taken to a local recycling center where they will bring in around $400-500.

Skeens had been collecting these tabs for two years and a lot of people from Wise County, Virginia pitched in, including several local atheists. Not only that, he’s organized a couple charity basketball games that have raised around $3,000 total for St. Jude (a place that, despite its name, has no affiliation with the Catholic Church).

Topping all of that, Skeens’ Humanism was mentioned in a local newspaper’s article about him (behind a paywall but seen below): 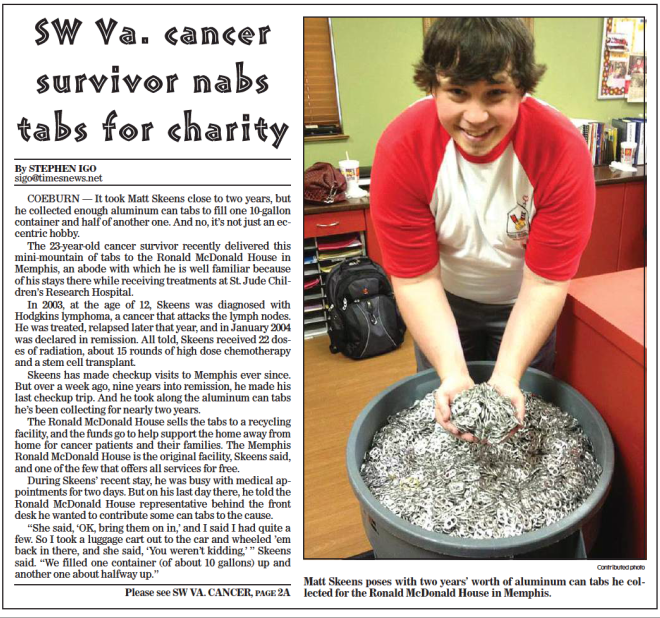 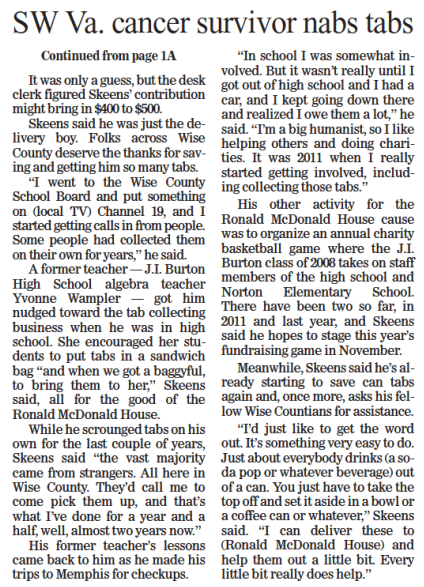 “In [high] school I was somewhat involved. But it wasn’t really until I got out of high school and I had a car, and I kept going down there [to St. Jude] and realized I owe them a lot,” he said. “I’m a big humanist, so I like helping others and doing charities. It was 2011 when I really started getting involved, including collecting those tabs.”

It was during his final check-up that Matt briefly stayed at the Ronald McDonald House, the first time he’d stayed there since a decade ago when he was there for several months after receiving the last of his chemotherapy, radiation treatments, and a stem-cell transplant from St. Jude.

Matt told me he plans to continue collecting these tabs to donate to the Ronald McDonald House as well as holding events for St. Jude. He explained in an email why the places meant so much to him:

[St. Jude treats] kids from 70 different countries, so atheists/Christians/Muslims/Jews etc. have all been treated. They pay for all treatment. If you have insurance, they charge it and pick up the deductibles/co-pays and they cover every penny if you have no insurance. They also cover food, travel and lodging via places like the Ronald McDonald a few blocks away. Everything single thing is covered and no one is ever turned away.

The Ronald McDonald House of Memphis is the original and is one of only a few RMH’s that charge nothing to those staying. They provide rooms (with the whole nine yards), a shared kitchen space, $100 a week for groceries and they provide transportation to and from the store. It’s really an amazing 52-room facility that is run by a tiny staff and a large force of volunteers. Different community groups from across the country, including church groups, come in on the weekend and cook for the entire House. It would be amazing if surrounding secular groups would participate. The money we raise goes directly towards the House’s daily operations, which gets pretty high with all that is mentioned above and so much more.

If any readers would like to chip in to the wonderful causes, you can do so here and here.

It’s really amazing how much good Matt has done for these places, knowing that God isn’t about to pitch in to help.

September 9, 2013
That Old-Time Religion: Why Does Sir Thomas More - Torturer, Killer, Saint - Have So Many Churches Named After Him?
Next Post

September 9, 2013 Pedophile Priest Scandal in Dominican Republic Puts Vatican Officials in the Hot Seat
Browse Our Archives
What Are Your Thoughts?leave a comment