The Islamic Society of Tampa Bay Area has a request for public school teachers and administrators. They want children of Muslim parents to be dismissed from school early once a week so that they can attend a mandatory prayer service.

Because that won’t disrupt student learning at all.

They put this permission slip on their website for families to download and take to their kids’ schools:

Let’s focus on the core of it: 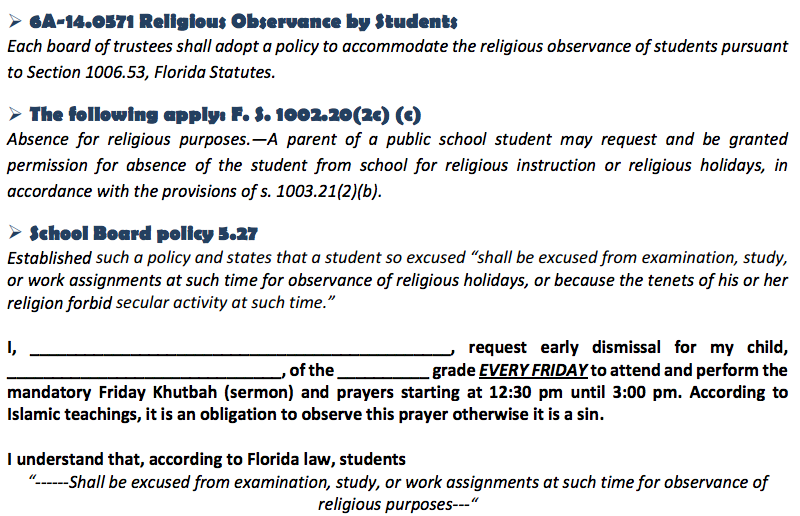 The form cites Florida Statute Section 1006.53 in making the case that schools must “accommodate the religious observance of students.”

When they don’t tell you is that Section 1006.53 includes a key word that the flyer doesn’t mention:

Each public postsecondary educational institution shall adopt a policy which reasonably accommodates the religious observance, practice, and belief of individual students

Missing 2.5 hours of school every week — during the same time period, no less — is hardly reasonable. If you’re in high school, that would mean missing the same classes for 20% of the year.

The form also fails to mention this Florida law:

Each district school board shall establish an attendance policy that includes, but is not limited to, the required number of days each school year that a student must be in attendance…

In many districts, there’s a minimum number of hours you must be in class. If you don’t attend class, you don’t get the credits, and you can’t graduate.

As the flyer rightly states, public school districts will grant you time off for religious reasons, but we’re talking a day or two, not half the day, once a week, for the entire school year.

According to the flyer, “it is an obligation to observe this prayer otherwise it is a sin.” But it is also perfectly alright to shortchange children on their education? I would suggest homeschooling is a better option for parents who require this devotion from their kids, but I feel that would only create a vacuum for even more prayer.

Anyway, let’s suppose the schools acquiesced on this and allowed the Muslim students to miss that much class. Depending on the number of students who would be absent, it would wreak havoc on the teachers and other students. It’d be no different than a group of students taking a field trip for another class, requiring my to adjust my lesson plans since I’d have to reteach the material the next day, anyway.

Most teachers, I’d assume, would be more than willing to accommodate students who miss class because they’re sick or have a family thing happening. But when it’s the same students missing the same class, week after week, it becomes much more of an obstacle.

But maybe I’m guilty of treating Muslims differently than I would Christians. I asked Heina Dadabhoy — an ex-Muslim — about this situation and this is what she told me:

Jummah [the Friday prayer in question here] is indeed considered mandatory for boys over the age of puberty. There’s no makeup for the actual Jummah. That said, most Muslim men in non-Muslim countries are forced to skip it because of work and school and instead pray the normal early afternoon prayer…

I don’t think it’s any more preposterous than the fact that a lot of stores and business are closed on Christian-based holidays like Christmas — and, for that matter, that Christian students are guaranteed Sundays off school so that they can attend church without a hitch.

She has a point there. If school took place on Sunday morning, wouldn’t Christians be demanding the same sort of time off? Am I just letting Christians off the hook here because the schedule already accommodates the majority’s religious beliefs?

Then again, church services don’t *have* to take place at a particular time or on a particular day. There’s a stringent nature to Islamic prayer that makes this Friday afternoon timeframe so rigid that students are forced to choose between attending class and being properly devout.

Heina also added that she knew people who prayed during their lunch periods or other times of the day — those students just worked things out one-on-one with their teachers. While I haven’t been in that situation with any of my students, I would just hope there’s some flexibility with the times they need to pray for the sake of their own education.

(via BizPac Review — Thanks to Brian for the link)