A Podcast That is Accidentally Relevant to Your Interests August 31, 2013 Paul Fidalgo

A Podcast That is Accidentally Relevant to Your Interests 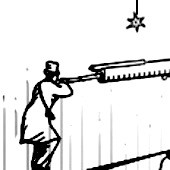 As he handed me the keys to his blog earlier, Hemant kindly plugged my new podcast, which I launched in July, almost entirely for my own amusement. The gist was that I happen to know a lot of interesting and smart people, and gee, might it be neat to interview them, since I want to do a podcast anyway. Therefore, the Obcast was born.

When I set out on my project, my intention was to keep the potential topics of discussion as broad as possible, and not be just another skeptic show. But it so happens that a lot of those smart, interesting people that I know, shock of shocks, are involved in the skepto-atheist movement. (For folks not used to my particular verbiage, “skepto-atheist” is my somewhat-humorous shorthand for us seculars, skeptics, atheists, humanists, etc.) So, I have hosted guests already that will no doubt be of interest to readers of Friendly Atheist, and some unexpectedly so, so I thought I’d take this opportunity, what with me having the keys to Hemant’s blog, to plug some of them.

In no particular order:

Gia Mora was the big surprise for me. Gia is a singer, actor, writer, dancer, model, etcetra, etcetera, and not having caught up with her in some time, I didn’t know exactly what she was up to. Turns out, she’s been touring a show of her own design, a cabaret-type performance piece called Einstein’s Girl that celebrates (and makes jokes out of) science by tying it to the bizarre world of human relationships. In our conversation, we cover all manner of topics that are very familiar to skepto-atheists and fans of science. I think folks from this community will quickly fall for her, both for her talent and what she’s chosen to do with it.

Ryan Koronowski is another: as deputy editor of Climate Progress at Think Progress, he’s fighting in many of the same trenches as the rest of us, trying to get the rest of the country to accept and understand the reality of the climate crisis, despite the onslaught of misinformation from science deniers. We don’t dwell on the topic all that much, but he gives some interesting insights into the world of political groundwork.

Kylie Sturgess should be familiar to many of you, as she’s a skeptic podcaster. We talk mostly about science communication in this episode (and zombies), as I make a point of getting her to dish on just about anything other than the skeptic movement. Because, come on, that’s our day job.

Even my other two guests should be of note: My CFI colleague Matt Licata was my beta-test guest, but we don’t talk about skepto-atheism at all, but we do talk about glasses and web design. My friend Ken Kennedy is another, a skepto-atheist to be sure, but we focus on his shift from libertarianism and his interest in tech activism.

So take a listen, you might find a conversation worth eavesdropping on.

August 31, 2013
An Example of Apologetics Leading to Nonbelief
Next Post

August 31, 2013 Weekend Fun For the Whole Family: Make Your Own Bible Verses!
Browse Our Archives
What Are Your Thoughts?leave a comment