The Church of Scientology has big plans involving its spiffy headquarters in Clearwater, Florida. 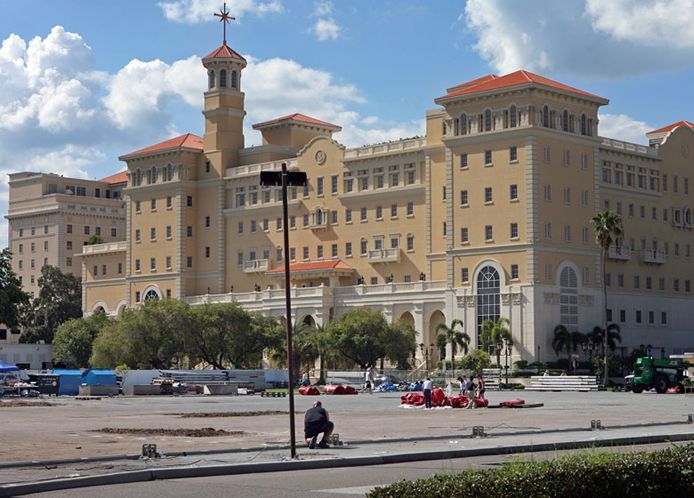 The massive seven-story structure that occupies an entire city block is scheduled to officially open in October with a dedication ceremony at which about 10,000 people are expected to be present. A month later, it will be the site of an international gathering of Scientologists that is scheduled to draw some 8,000 Xenu believers.

To accommodate the visitors, a huge tent will have to be erected — which was bad news for two fine oaks that stood in the Church’s way, close to the $80,000,000 edifice. Church authorities decided to cut down the trees, despite being under orders from the city to preserve them.

The removal of the approximately 20-foot-tall trees caught city officials and even the church’s own contracted arborist by surprise on Monday.

“I was working on relocating those trees,” said Rick Albee, a retired Clearwater arborist who now owns his own consulting company, Urban Forestry Solutions. “I didn’t recommend it.”

Neither did the city. In an Aug. 21 meeting, city planners explicitly stated that a “natural resource plan must be in place that ensures the survival of any trees impacted by this project.”

The Church didn’t care, brought out the chainsaws, and paid the city’s $2,000 fine without batting an eyelash.

The killing of the oaks is nothing if not forward-looking.

[City manager Bill] Horne said he has seen renderings of a church plan to build a concert hall on the vacant site, although no plans have been submitted. Perhaps that figured into the church’s decision, he said.

The Flag Building, also referred to as the Super Power Building, is the largest building in Clearwater, Florida. It is owned by the Church of Scientology and was built principally to deliver the Super Power Rundown, a high-level Scientology training course intended to train Scientologists to use all of their 57 “perceptics” or senses. The interior of the building contains training suites, course rooms, theaters and various devices intended to test “perceptics”, including a time machine, an anti-gravity simulator, an infinite pit and a pain station.

If only the time machine could be used to bring back the oaks that the Church of Scientology stole from the people of Clearwater.

August 29, 2013
David Barton: If There's No Prayer at a Public School Graduation, That's a Promotion of Atheism
Next Post

August 29, 2013 The Official Approval Letter for Dave Silverman's ATHE1ST License Plate
Browse Our Archives
What Are Your Thoughts?leave a comment