Secular Coalition for America’s Edwina Rogers Featured in The Washingtonian

The September, 2013 issue of Washingtonian has a long feature on Edwina Rogers, Executive Director of the Secular Coalition for America: 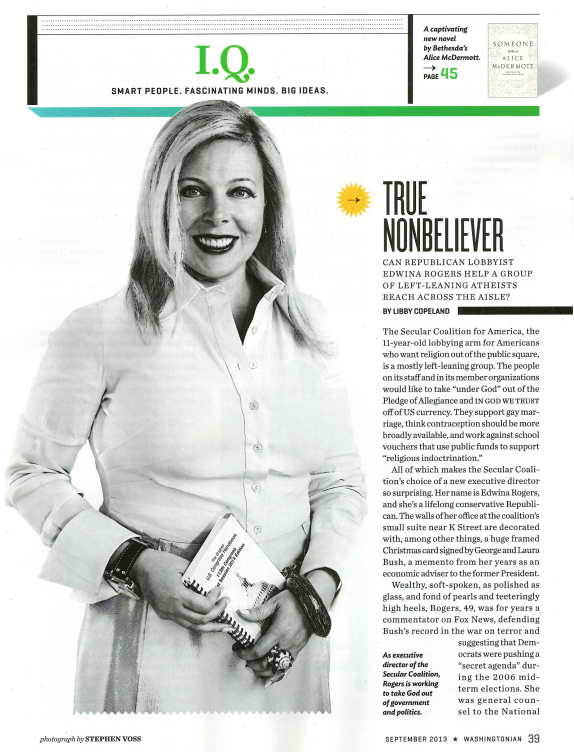 During one of several interviews for the job, the room was packed with staff and advisers who were, in the words of coalition bigwig Woody Kaplan, “flabbergasted” and “incredulous” at Rogers’s presence.

“My purpose was not to interview Edwina to see if she was right for the job,” recalls Kaplan, an adviser to the coalition, “but to destroy her.”

Yet Rogers “turned the entire room around,” Kaplan says. He’s been a civil-liberties lobbyist and donor for decades, school in the art of political sausage-making — but he’s still slightly awed by Rogers’s powers of persuasion: “She walked out and we voted 100 percent for her.”

Most of the information wasn’t new or revealing to me, though, until I came across this passage:

… both this summer and last, Rogers has brought in interns sponsored by the Charles G. Koch Summer Fellow Program. The archconservative, ultra-wealthy Koch brothers, Charles and David, are reviled by many rank-and-file secularists, and it’s fair to say that if these interns were more widely known about within the movement, there would be considerable outrage.

There’s an understatement for you.

The interns should be judged on their merit, of course, and how they performed at the jobs they were assigned to do, but the very nature of the sponsorship makes me feel dirty just thinking about it.

The piece also quotes Richard Dawkins and Grover Norquist, leading Copeland to state: “(This may be the first and last time these two men are quoted in anything approaching agreement.)”

You can read the full article on the SCA’s website.

August 28, 2013 Introducing the Secular Safe Zone
Browse Our Archives
What Are Your Thoughts?leave a comment