After Atheist Writes Book, a Christian Formatter May Have Added in His Own Links August 26, 2013 Hemant Mehta

After Atheist Writes Book, a Christian Formatter May Have Added in His Own Links

Suppose you wanted to self-publish a book. You write it all up in Microsoft Word (or whatever) and you turn to people who can help you get it on Amazon and Barnes & Noble. You pay them a fee and it’s ready to go, right? Not quite. You have to format your document to meet the needs of the various publishers. Amazon requires a particular format for the Kindle, Barnes & Noble requires a different format for the Nook, etc.

That’s what Joseph Herrera needed help with after he wrote a book called God Doesn’t Exist: And Yes, I Can Prove It. 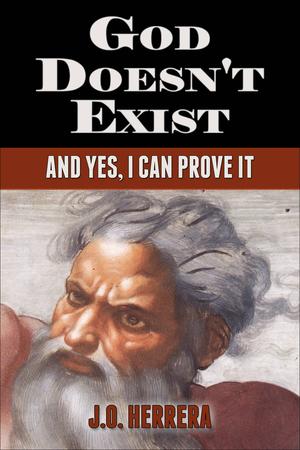 He tried formatting it himself but just couldn’t get it right, so he visited Smashwords (an eBook publisher and distributor) and they addressed his exact concern on their website:

… if you don’t have the time or patience to do [the formatting] yourself, send an email to list@smashwords.com to request “Mark’s List” of low-cost ($40+) Smashwords ebook formatters and cover designers.

Easy enough. So Joseph requested and then went to their list to look through all the formatters. Smashwords says it “cannot warrant the quality of their work,” but Joseph decided to go with someone named Jacob Drake:

Joseph paid Jacob his fee and soon got his manuscript back with what appeared to be all the proper formatting. Great! Smashwords approved the revised manuscript and it’s now available at their website.

But Joseph had a weird feeling after his final email exchange with Jacob, the end of which said:

“Good thing God provided me to tell you this and get your book ready for you, isn’t it?

That’s… weird. Even in context, it’s tough to tell if that’s supposed to be a joke directed at the author of a book about atheism. But whatever, The book was formatted and everything seemed fine.

Until Saturday, that is.

Joseph was removing the hyperlinks from the book so he could prepare a different version of it. As his mouse cursor hovered over the links in his Table of Contents, he saw the names of some of the “bookmarks” — code that would allow readers to click on a section in the Table of Contents and be taken directly to that part of the book.

There was one for the preface… 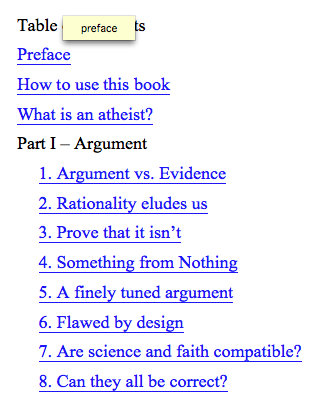 And one for “How to use this book”… 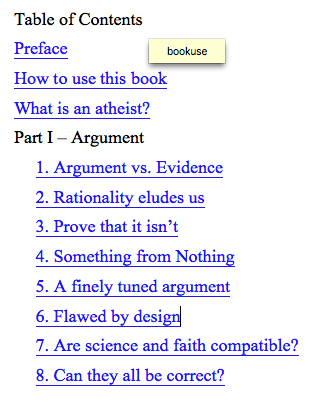 And one for “What is an atheist?” 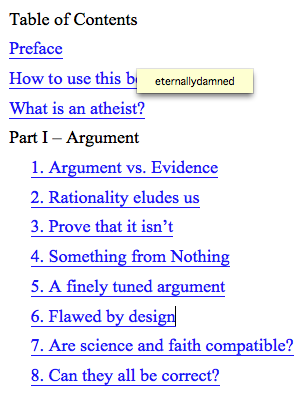 Whoa… “Eternally Damned”?! Where did that come from? Not Joseph, that’s for sure…

My initial reaction was shock, then I chuckled a bit, then I got angry. This man holds himself out as a professional and charges for his work. If he didn’t want the job due to his personal religious convictions, he could have turned it down. But apparently money speaks more loudly than faith, so he took the job and then just couldn’t help but deface my work.

Maybe “deface” was too harsh a word. The bookmark only applied to the Word document and none of the readers would ever see it. But still… You can imagine Joseph’s paranoia. He started re-reading the book, looking to see if there were any other changes.

It wasn’t long before he found two magical additions to the end of his book.

Here was the original version of his appendix (in pre-formatted PDF form): 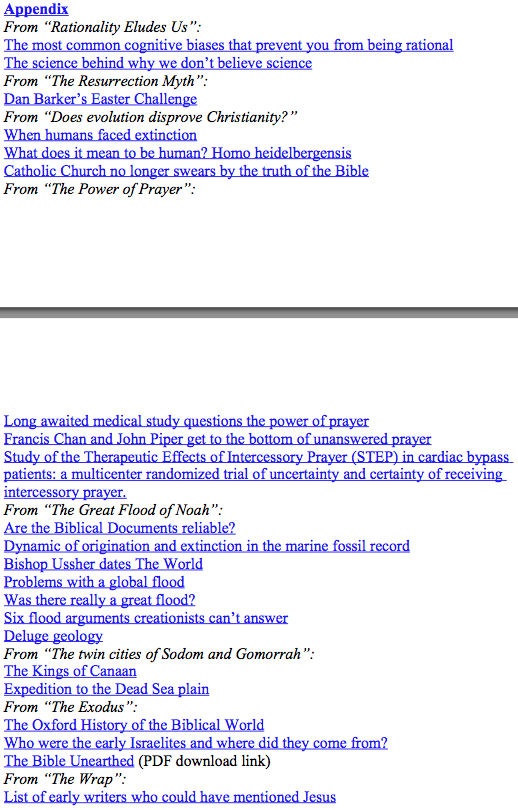 And here was the formatted version he got back from Jacob… with two additions which I’ve boxed off: 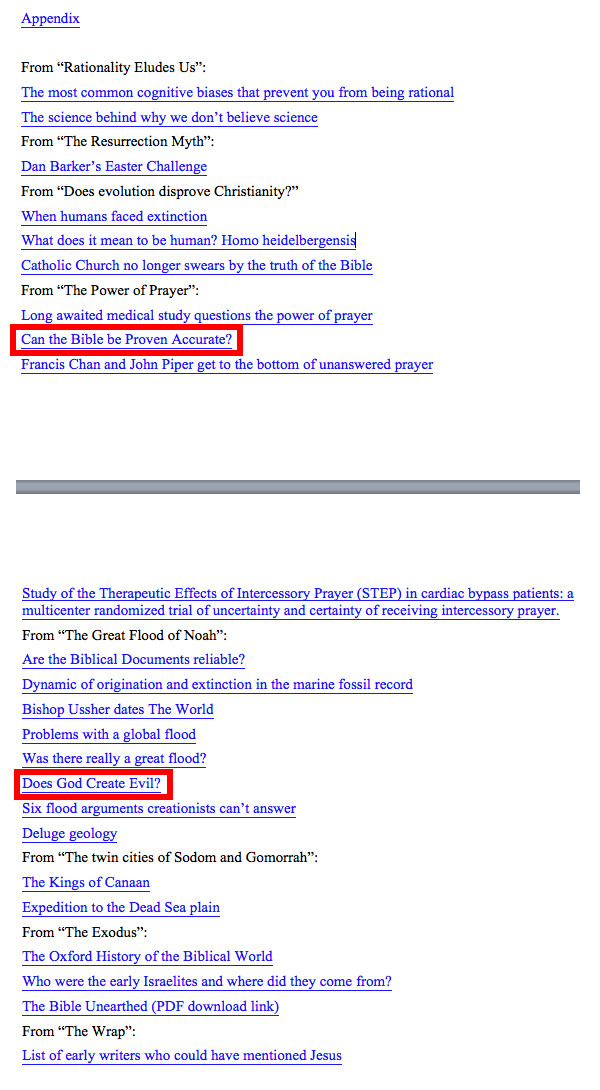 Those two questions were linked to here and here, respectively.

Who knows what else was changed…

I reached out to Jacob to ask him about these changes and, instead of denying the changes and leaving it at that, his response was to never speak with me again:

First, I don’t discuss dealings with clients. Second, I never change anything from clients. All I do is format what they send to me. If a change is made to a file after it has been received by a client there is nothing I can do about it.

Our discussion is finished. If you are not a client, please don’t write to this address again.

I had a few more questions, but Jacob clearly didn’t want to communicate with someone inquiring about his work… So that’s where we’re at. Joseph sent a file to Jacob without those additions, Jacob returned it to Joseph with those additions, and Jacob refused to talk with me about it.

He did respond to Joseph, though, saying that he was “baffled” and “completely confused” over how this happened.

To his credit, Mark Coker, the founder of Smashwords, has been very responsive to Joseph. They’ve exchanged several emails going over the details of this case, and Coker apologized to Joseph, stating that he would deal with the matter personally and undergo a thorough investigation. This incident shouldn’t be a poor reflection on their company. The way Coker is handling it seems very professional.

Which is more than I can say for Jacob…

@hemantmehta Jacob formatted my Roger Williams' ebook. Very unprofessional, had to pay for redo. Should not be on Smashwords' approved list.

August 26, 2013
Is Atheism a Religion? That Question's at the Heart of a Lawsuit Over Housing Credits for 'Ministers of the Gospel'
Next Post

August 26, 2013 In Praise of Catfish: The TV Show
"So many things to ask, but the troll votes prevent addressing the anti-abortion atheist.What is ..."
Rogue Medic Atheist Groups Urge Supreme Court to ..."
"Grifting li’l bastid."
Louie Foster CA Sec. of State Candidate Claims ..."
"Cute!"
Troublesh00ter Benet Academy (IL) Faces Backlash After ..."
"Mostly? Nothing at all."
Troublesh00ter Benet Academy (IL) Faces Backlash After ..."
Browse Our Archives
What Are Your Thoughts?leave a comment