We lost a real hero yesterday in the worst possible way.

Dr. Narendra Dabholkar, a 67-year-old anti-superstition activist and Humanist leader from India, was assassinated on Tuesday morning, presumably because of his skeptical beliefs.

Dabholkar, who was at the forefront of a campaign to persuade [the] Maharashtra government to pass an anti-superstition and black magic bill, was shot dead by two unidentified youths at 7.20 am on Omkarweshwar bridge near Cosmos Bank in Pune on Tuesday morning.

Dabholkar’s murder comes days after the Maharashtra government assured introduction of the anti-superstition bill even as Right Wing groups continued to oppose the bill.

For 30 years, Dabholkar worked to eradicate the scourge of superstition from a country known for embracing it. The anti-superstition bill that he fought for — but which has not yet passed — was one that went after the real criminals, the ones who used pseudoscience and myth to separate you from your hard-earned money. It was not, as some may think, a way to criminalize religion:

“In the whole of the bill, there’s not a single word about God or religion. Nothing like that. The Indian constitution allows freedom of worship and nobody can take that away,” he said.

Still, Dabholkar never sat by silently when religious “godmen” claimed to perform miracles or unnecessarily sacrificed animals for the sake of religious ritual.

His resume is about as impressive as one can get:

In 1989, along with other like-minded people, he founded the Maharashtra Andhashraddha Nirmoolan Samiti [Committee for eradication of blind faith].

In the past 20 years he confronted many babas, buas, tantriks, etc. and led many agitations against several forms of superstitions, water pollution and animal sacrifices.

He was also the founder member of a de-addiction Centre, Parivartan in Satara.

“Narendra was a person of great charm and commitment to the cause. He declined to spread his activism outside Maharashtra because he was keen on first developing a branch of his organisation in each village of the state. Organisational work of this kind made the movement a force to reckon with in Maharashtra state where he was spearheading the movement for a Bill against Witchcraft.”

… “Dr. Dabholkar’s work in the past 30 years has been the stuff that legends are made of. He remains a beacon of reason, rationalism and science in India.”

“Our thoughts are with his family and the many rationalist and Humanist colleagues with whom he worked so closely and so tirelessly over the years. Dr Dabholkar’s campaigns brought him onto political territory, but he was always a social reformer motivated by truth and a desire to fight injustice. We urge the authorities to investigate this vile murder and to explore without fear all the possible links to his work.”

And pseudo-science debunker Sanal Edamaruku (whose decision to leave India is even more sensible now):

I remember a discussion that we had not long ago. He urged me to come back to India and fight my harassers in a court of law. Considering the danger, he advised me, one should always ready to die a martyr for the cause. Martyrs are good for the movement. I did not agree myself with allowing my enemies to have such an easy triumph. But I knew he was very serious about it.

Dabholkar was hated by fundamentalists. But, being the peaceful, open-hearted and kind man he was, he was adored and loved by the people. Over the years, his popularity in Maharashtra grew and grew — together with public understanding of the importance of the rationalist fight.

Narendra Dabholkar has died a martyr – now we have to ensure that his brutal murder does not turn a triumph for the enemies of reason. It is the best tribute that we can pay to him, to take up his mantle and go forward. That is what we owe him – and it is what we owe India.

One of the right-wing Hindu groups that opposed Dabholkar’s views has denounced the cowardly actions of the killers, speaking only in respectful terms of the man they frequently sparred with:

The [Sanatan] Sanstha spokesperson Abhay Vartak said that even though they had filed more than 20 cases against Dabholkar, they had nothing personal against him and had regarded his as a “representative of atheists”.

He said that their opposition to Dabholkar was limited in his capacity as atheist and not at personal level.

“We had filed cases in court for false allegations made by him against the Sanstha. The murder of Dabholkar is shocking. We hope that the guilty will be arrested and brought to justice soon,” Vartak said in a statement.

It saddens me to no end that a skeptic was killed, it seems, for challenging people’s most-cherished beliefs. (It’s a suspicion we’ve seen before.) But if his death can inspire others to tip over even more sacred cows, it won’t be completely in vain.

There is a 1,000,000 Indian Rupee reward (just under $16,000 USD) for anyone with knowledge about the killers. They’ve released this sketch of one of the suspects: 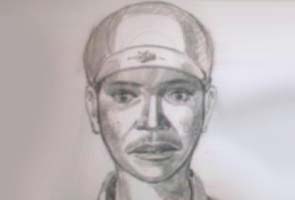 ***Update***: In the wake of his death, Government officials in Maharashtra have announced they will approve the anti-black-magic law Dabholkar championed for so long.

August 21, 2013
Humanist Wedding Featured in The Atlantic
Next Post

August 21, 2013 Book Publisher Cancels Release of Novel Rather Than Allow Gay Author to Mention His 'Partner' in Bio
Browse Our Archives
What Are Your Thoughts?leave a comment