How Revolutionary is Pope Francis, Anyway? 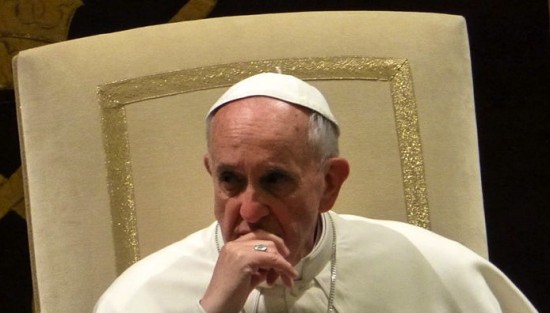 It’s hard, even for an angry, arrogant, militant new atheist like me, to not like Pope Francis. He seems to be saying all the right things for someone in his position, rhetorically easing off of gays, emphasizing the plight of the poor, and not being afraid to bring himself to the level of those in need, or those with whom he has little in common.

It helps that he’s so grandfatherly, with a warm smile and those standard-issue old-man glasses, whereas Ratzinger was so comically villainous.

Damon Linker, author of The Theocons and The Religious Test, wants progressives to temper their enthusiasm, however. Not because he sees Francis as nefarious, but rather he sees little evidence that a revolution of sorts is under way in the Church:

Francis’s renewed emphasis on the poor is certainly welcome and valuable, and there are circumscribed areas in which the Pope may achieve real reforms. But when progressive Catholics pine for change, they mostly mean that they want to see the Church brought into conformity with the egalitarian ethos of modern liberalism, including its embrace of gay rights, sexual freedom, and gender equality. And that simply isn’t going to happen. To hope or expect otherwise is to misread this Pope, misinterpret the legacy of his predecessors, and misunderstand the calcified structure of the Church itself.

Any pope who wanted to dramatically change the Catholic Church would have to do so through the processes and procedures of the institution — and it is an institution seemingly designed to thwart such ambition.

The problem, according to Linker, is one that is familiar to progressives in the U.S.: Even if we assume the most hyper-liberal intentions on the part of the Pope, he would be stymied by a massive church bureaucracy, one made up of clerics who have been appointed by his more conservative predecessors.

It’s disheartening when you think of it that way, that even an “Ideal Francis” is mostly powerless to change the Church all that much.

But let’s take a look at the other side of the coin, where Francis is no (ahem) saint, but just another evil apparatchik of an evil enterprise. Linker is not in that camp, either, citing, for example:

[T]he most serious charge against him — that he turned over two priests to Navy torturers — has never been substantiated. What is clear is that he refused to speak out publicly against the regime, even as he reportedly worked behind the scenes to help people flee the dictatorship.

Linker thinks that progressives’ best hope for Francis’ tenure is in his non-substantive contributions, in his rhetoric, which could set the tone for the slow trickle of new blood into Church leadership under his purview.

But interestingly, it is this very aspect of Francis that most worries my friend Miranda Celeste Hale, a longtime (and merciless) critic of the Church. Indeed, Miranda declares Francis to be the worst of the last three popes:

[I]f someone is a malicious ideologue, I much prefer that they be open about their maliciousness and their unwavering commitment to a rigid and regressive ideology. Francis doesn’t do that, though. He couches his callousness in pseudo-tolerant and pseudo-progressive rhetoric and hides his dangerous attitudes and beliefs behind a facade of avuncular populist everyman friendliness… Francis is manipulative. He’s a skilled abuser of rhetoric who knows how to say the “right” things at the “right” time. He’s good PR for the Church. Unlike his immediate predecessors, he’s neither an intellectual nor extremely intelligent. But he’s sly like a fox. He’s a gift to the Church, a perfect Pope for the Catholic Church of 2013.

I take her point. The Church is the Church, its dogma is its dogma, regardless of what the nicer Pope says. But I do think that, as Linker says, there is value in the head of the Church playing the part of being more open. The question is whether Francis himself will choose to lean into Bronze Age dogmas, like his predecessor, or ease off them. If it’s the latter, his rhetoric is not entirely empty, and he may begin the process of slightly altering the destructive course of this massive vessel.

If he doesn’t, then Miranda is right. He’s a nice hood ornament on an 18-wheeler coming right for us.

August 20, 2013
An Interview with Creationist, Filmmaker, and Banana-Enthusiast Ray Comfort
Next Post