Mitch Kahle, founder of the Hawaii Citizens for the Separation of State and Church, has been a successful activist for a few years now:

In 2010, he protested an invocation prayer in the Hawaii State Legislature and won a lawsuit after being roughed up and arrested by police for “disorderly conduct.”

Last year, after a public school partnered up with a local church to raise money for a Christian charity, he wrote a letter to the Department of Education and stopped the Constitutional violation.

This is a guy who knows how to stand up for his principles, even if they’re unpopular.

Now, along with his partner Holly Huber, he’s tackling his biggest case yet.

It involves churches that rent out worship space at public schools. Normally, that’s fine and legal, but Kahle and Huber have evidence that five churches have not paid fair rental price at public schools for the past six years, resulting in a loss of funds for the state of $5,600,000. The evidence that they were at the schools beyond contract hours includes pictures from the churches’ social media sites and their own websites. (There are actually 35 other churches violating the law, too, but these five are the biggest offenders.)

Their lawsuit calls out New Hope Oahu, New Hope Hawaii Kai, New Hope Kapo­lei, One Love Ministries and Calvary Chapel Central Oahu as churches that underpaid the Department of Education by renting space for a certain amount of time and then staying much longer than the contracts allowed. 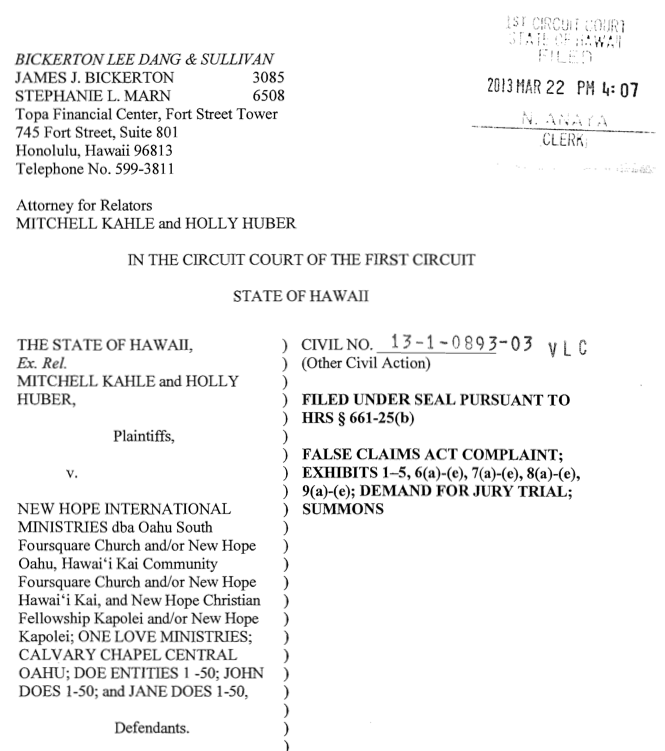 Plenty of churches rent space from public schools. That isn’t the issue. The allegation is the churches are intentionally filing false applications to get charged less.

“By not paying for what they use they are directly taking money from our states children,” said Jim Bickerton, plaintiff’s attorney.

“They’re there so long and they’re so cozy they just take a whole bunch of extra time, they come in on Saturday even though they’re only supposed to be there on Sunday,” said Mitch Kahle, plaintiff.

This isn’t just some trivial issue. One of the schools in question, Farrington High School, recently had a roof collapse. That’s an infrastructure problem that could have been fixed if they had the $3,200,000 owed to them by New Hope Oahu over the past six years. The church said they used the school’s facilities for only 7.5 hours a week. According to Kahle and Huber, they actually used it about 50 hours a week (from Friday to Sunday). So they were only paying for 15% of the time they were there.

In another case, at Kapolei Middle School, New Hope Kapolei church was using “as many as seven air-conditioned classrooms, two teachers’ lounges, grounds, and parking lots without payment of any rental fees or utilities charges over many years.” That’s nearly $350,000 in unpaid fees.

How are the churches getting away with it? In part, it’s because they offer other things to the school — like uniforms for the athletes. But Kahle’s lawyer says that’s not good enough:

“Now it’s very hard when someone has given some uniforms to the kids and turnaround and say hey you cheated on your application form. So it’s easier to let it go,” said Bickerton.

The churches deny any improper facility usage. They’re basically arguing we’re good for the community so why not just let everything else slide:

“The three New Hope Churches mentioned in the claims are members of the Hawaii District of Foursquare Churches. We can assure the public that our churches have always honored all agreements made with DOE agents for the use of public school facilities. On top of paying the rent agreed, we have also given voluntarily thousands of dollars to the schools we use to upgrade their facilities and equipment. We are committed to be a blessing to our community,” wrote Fernando Castillo, Hawaii District of Foursquare Churches Supervisor.

By the way, here’s another twist to the case: The state’s Board of Education chair Don Horner also happens to be a pastor in the New Hope church system. The executive pastor at New Hope Oahu asked Horner to lower the rental fees and get rid of the provision that only let you lease out space for five years. Guess what happened after that…?

Less than three weeks later, DOE Superintendent Kathryn Matayoshi announced that she had deleted the five-year rule from application forms.

Talk about a serious conflict-of-interest…

If Kahle and Huber win their lawsuit, the churches could owe the state up to $16,800,000, three times the amount they’ve shortchanged the schools (that is, if they are found to have knowingly evaded the law).

For the legal junkies out there, this is a qui tam lawsuit. That means Kahle and Huber don’t have to have standing or prove they’re affected by the churches’ deception in order to bring about the lawsuit. (As opposed to, say, Jessica Ahlquist bringing a suit against her school because she was directly affected by a religious mural.) They’re trying to help out the government by recovering these lost fees, and a qui tam lawsuit lets them do it. If they win, they stand to gain anywhere from 15-30% of the proceeds as a sort of reward for helping the state recover the rest of the amount.

This lawsuit was actually filed back in March. Hawaii’s Attorney General David Louie had five months — during which time the lawsuit remained confidential — to decide whether the state wanted to join Kahle and Huber in their lawsuit. For now, Louie has chosen not to intervene, so Kahle and Huber will act on their own as agents of the state. Louie may choose to join them at a later date.

Now that Louie has passed on joining them in the lawsuit, the files are no longer confidential. So here’s an exclusive look at the key documents.

When I spoke to Kahle last night, he told me that he and Huber were inspired to look into their state’s schools’ relationships with churches after reading the New York Times reports about the Bronx Household of Faith and its (ultimately unsuccessful) challenge to meet in a public school.

August 17, 2013
What Has Religion Done for Us This Month? Episode 9
Next Post

August 17, 2013Newsweek Features James Randi and The Amazing Meeting in Latest Issue
Browse Our Archives
What Are Your Thoughts?leave a comment