If Abortions Were Illegal, These Pro-Lifers Want Women Who Obtain One to be Sent to Prison or Put to Death August 8, 2013 Hemant Mehta

If Abortions Were Illegal, These Pro-Lifers Want Women Who Obtain One to be Sent to Prison or Put to Death

Here’s a question that’s always fun to ask pro-lifers: If abortions were illegal, what should the punishment be for women who have one?

The Facebook group “Life Begins At Conception” asked its members and the responses were a big bowl of terrifying: 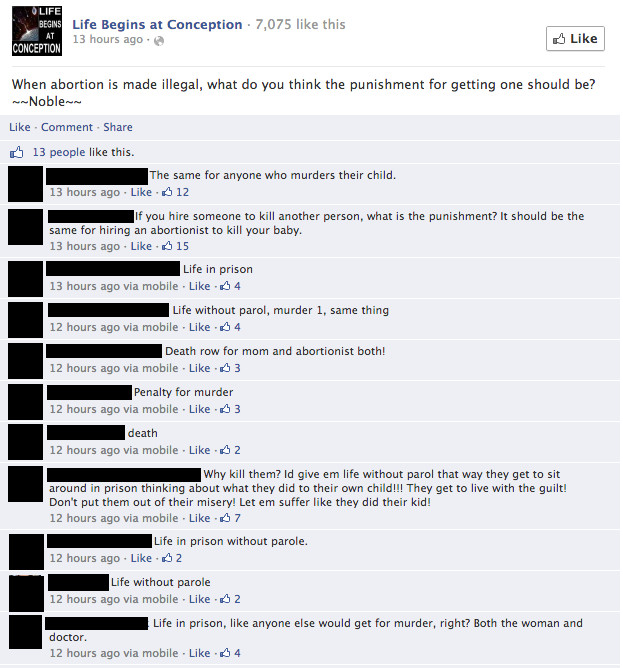 The death penalty for the mother.

The death penalty for the abortion provider.

A “full hysterectomy at the least.”

A “small injection of saline,” just to make the mother suffer.

I’m not suggesting that crowd is representative of pro-lifers as a whole, but it frightens me to see how many of them approve of death…

One Christian, at least, had the good sense to write, “Jesus would probably suggest ‘forgiveness.’ So maybe you should start there.” (I like her.)

It’s weird that the punishments they offer are so harsh, especially when you consider that if their churches kicked out women who had had abortions (or men who were party to them), those pews would start to empty out quickly. In 2008, the Guttmacher Institute reported that nearly two-thirds of all abortions were obtained by women who were Christian (PDF):

Maybe a little more leniency coming from that pro-life crowd wouldn’t be such a bad thing.

August 8, 2013
Snake-Handling Preachers Are Getting Their Own Reality Show
Next Post