Frederic Rich: The Christian Right is Not Just Cranks and Knuckleheads 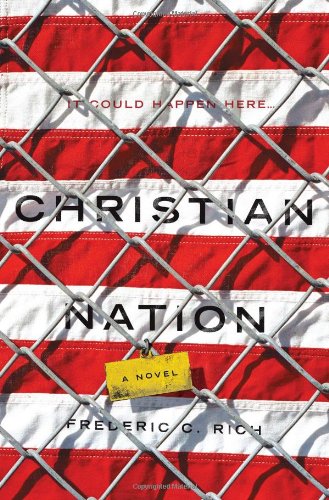 After the 2008 election, I think a person could be forgiven for thinking the tide had finally turned on the Religious Right, as a young, progressive, black politician was elected president. All the fear-mongering and rumors churning about whether Barack Obama was a secret Muslim, or perhaps Satan himself, didn’t seem to stop the dam from bursting on the Bush years.

The political elastic, of course, snapped back pretty hard in 2010 (though I would never take a midterm election to be representative of the entire potential electorate, since turnout in those is usually limited to activated partisans), and particularly in state legislatures, we saw Christianists swarm into power.

It is in this context that Frederic Rich, author of a new alternate-reality novel, Christian Nation, in which Sarah Palin becomes president and begins America’s transition to full theocracy, tells us that, yes, the Religious Right is not just a joke. (We posted an excerpt from the book on this site last month.)

In an “Ask Me Anything” for The Dish, he explains why he wrote his book: explicitly to instill fear into his readers,”for the readers to feel threatened,” as he puts it.

Rich warns us that the Religious Right will “wash over us” if progressives and seculars presume its defeat too soon. With antiquated blowhards like Pat Robertson, for example, it can be easy to laugh much of the old Christian right away, but Rich is right, the 2012 bench of candidates for the GOP nomination was remarkably theocratic (though Rich incorrectly places Mike Huckabee in the 2012 mix — Huckabee ran in 2008), and many state governments are dragging their states back to the Bronze Age as quickly as their horse-drawn carriages will take them. And often, we’re all just powerless to stop it.

August 3, 2013
Are Faith-Based Dorms at Public Universities Legal?
Next Post

August 3, 2013 Burka Avenger: Fighting Islamist Evildoers, One TV Cartoon At a Time
"I sincerely hope he has documentation of some sort to back up his claims, or ..."
jomicur Atheist Sues L’Oreal Over Repeated Acts ..."
"OT: guess what I'm fixing https://uploads.disquscdn.c..."
K. Ramsuer Rick Wiles: A “Satanic Zionist Power” ..."
"This was a crazy, patchwork kind of dilemma for my recently immigrated Asian mother in ..."
GT Should Two Oregon Educators Be Fired ..."
"My people are destroyed for lack of knowledge. Because thou hast rejected knowledge, I will ..."
jomicur Christian Nationalist Preacher: God Will Soon ..."
Browse Our Archives
What Are Your Thoughts?leave a comment