Prepare for YouVersion, the Instagram of Bibles! July 28, 2013 Paul Fidalgo

There is a technological revolution underway, and it’s happening under the radar of we hip skeptical types: iBibles.

Now, I’m not talking about some clunky Kindle-clone that contains only The Word, I’m talking about an extremely popular, cross-platform, nondenominational mobile app, labeled in your app store simply as “The Bible,” but officially known as YouVersion. 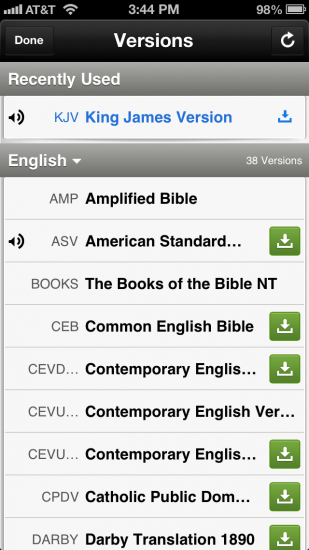 What’s so special about this? After all, there are hundreds, probably thousands of apps that reproduce the Bible in digital form. YouVersion is notable because it’s an app that contains a huge variety of versions of the Bible, and hundreds of translations in myriad languages. In addition, it offers up the Good Book with an interface that is remarkably, well, Apple-like. Versions and languages are easily accessible, typeface and style are easily customizable, there are audio and video options, note-taking functionality, and the app is generally sharp and pleasing to use.

Ack! It’s pleasing! The Bible must not be pleasing! Well, that’s not such a bad thing. Even we godless like to have convenient access to the Bible and other religious tomes, for study, for refutation, for kicks (I guess). It’s better for believers and nonbelievers alike to have something nice to use.

Of course, then you listen to the founder of YouVersion, Bobby Gruenewald, here in an interview with Patheos’ Robert Crosby:

One of the most helpful aspects of the app is the access we have had to analytical tools. These tell us how many people have installed the app, how many times people open it, how long they’re spending in God’s Word, and which features they are using. This continues to help us improve the tool.

The purpose of the app is evangelical, literally. (At least in part.) It’s a way to get the Bible into as many hands and devices as possible. Apparently, it’s really, really working. According to The New York Times, the company behind YouVersion aspires “to be a kind of I.T. department for churches everywhere… This month, the app reached 100 million downloads, placing it in the company of technology start-ups like Instagram and Dropbox.” 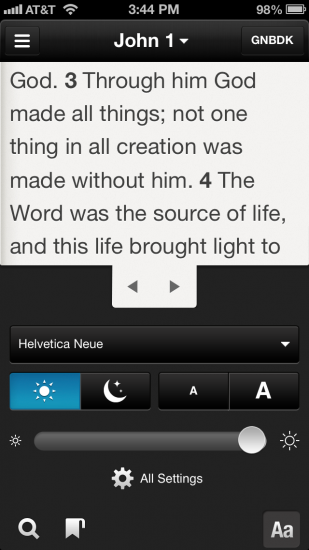 To someone like me who follows the tech industry pretty closely, that’s crazy. But as someone who also follows religion very closely, it makes sense. The ubiquity of devices plus the cultural dominance of Christianity makes a successful app like this a foregone conclusion.

Indeed, it’s the fit and finish of this app that makes it stand out to me. Look at other similar attempts to be techno-savvy by religion, you get fairly laughable things like GodTube, the Bible Tablet, and BibleBytes.

But YouVersion, as I said, is very well done, at least from the little I’ve used it, it does seem pretty slick.

The app is free, which bothers some folks who publish Bibles as a business, as it gives Gruenewald’s company a lot of power with the enormous reach he has. And the monetization ideas are already bubbling. Again from the Times:

[Gruenewald] compared the relationship between YouVersion and traditional publishers to the “freemium” strategy common in mobile games where the core content is free, but extra features cost money. In this case, those extras are things like devotional Bibles, study Bibles or gold-embossed heirloom Bibles.

Hold on to your wallets, folks! Try to resist!

I’d actually encourage atheist-folk to check the app out, see what it is about this app that has made it catch on. Maybe we can learn from it.

July 27, 2013
Kansas City Atheists Want to Raise Funds for Local Charity After It Was Robbed
Next Post

July 28, 2013 What Does Science Offer the World?
"I’ve long argued that every baseball record that preceded integration should have an asterisk by ..."
Maltnothops Catholic Bishops Condemn Pro-Choice Joe Biden ..."
"OT: Oh, I wish a mother fokker would say this to my face...Kevin McCarthy: 'Everybody ..."
WallofSleep Christian Who Spread “Prophecies” About Trump’s ..."
"Oh like your pathetic response to how Irish law led people in the medical profession ..."
CriticalDragon1177 Arizona Republicans File Bill to Punish Abortion ..."
"Absolutely not, those corporations gotta get paid ya know. But there is a shortage of ..."
WallofSleep Christian Who Spread “Prophecies” About Trump’s ..."
Browse Our Archives
What Are Your Thoughts?leave a comment