On Being an Apple ‘Catholic’ 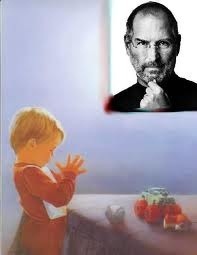 It is no new thing to compare Apple, Inc. to a religion. The fanatical devotion it has inspired over the decades has made many outsiders eye it suspiciously, as it hawks a kind of techno-faith in which the textbook charismatic leader, Steve Jobs, emits a Reality Distortion Field that turns the skeptical into zealots, hungry for the latest sleek combinations of glass and aluminum like the damned crave absolution. The term “Cult of Mac,” begun by Leander Kahney in his book and website of that title, both pokes fun at and celebrates this comparison.

Those who live inside the Reality Distortion Field, in my experience, rarely resent this. Just as true religious zealots do not mind being known for their blind faith, but wear it as a badge of honor. This is a bit of an exaggeration, of course, as even the most doughy-eyed Apple user will still vent criticisms and complaints, but very often this is done in the spirit of keeping true to a central credo; as in, if device X does or does not have Y feature, is that really keeping with The Apple Way? Is it What Steve Would Have Done? Et cetera.

I, too, have embraced this. Being an atheist, in particular, it’s actually kind of fun to have a pretend religion to subscribe to. I follow the teachings of The Steve, Apple keynotes are like a twice-yearly mass, and I look for signs from the prophets Tim Cook and Jony Ive, just as much as I shook my head in despair at the heretics Scott Forestall and John Browett as they fell from grace.

[A]s everyone knows, the world-religion of the educated and prosperous in the twenty-first century is Apple, with its Vatican in Cupertino and its cathedrals in the light-filled Apple Stores that draw pilgrims gripping iPhones and iPads like rosaries. Apple’s flock is secured against heresy by censors who rule the online App Store; only applications with Apple’s imprimatur are allowed on an iPhone. Programmers risk excommunication — with all their works condemned to being listed in an Index of Prohibited Software — if they violate canon law by bypassing Apple’s banking system or ignoring its infallible doctrine. Rebellious heretics can “jailbreak” an iPhone and induce it to accept software anathematized by Apple, but a heretic’s phone is refused communion when presented for repair at the Apple Store.

It’s true. As much as Apple is a corporation, and would publicly laugh off mentions of their quasi-religious status, they are doubtlessly generating a culture around their products and services. Mendelson calls the Apple Stores cathedrals, but I (who worked in one such store for over a year) think of them more as embassies — outposts in the ugly real world set up to represent Apple diplomatically to the local population and to help spread Apple virtues and values (a prime one of which would, of course, be “buy Apple stuff”).

Mendelson focuses his piece on one particular aspect of Apple’s ecosystem that goes somewhat against dogma, the programming language of AppleScript, which allows non-experts to do what is rarely done in the world of Apple: lift the hood of the operating system (on OS X anyway) and tinker with the guts. This leads Mendelson to this comparison:

He goes on to make a case for why the “protestant” side of Apple is the preferable one. (“Apple nailed its Ninety-Five Theses to its own door.”) As for me, I’m less sure.

To be clear, I like that AppleScript exists. I like that one can perform more advanced tasks in the Terminal or with Automator. But I almost never, ever do. (That said, if you own a MacBook Air, and would like it to wake from sleep faster, you must use this Terminal command.)

You see, I think Apple’s done, for the most part, a good enough job without me going into the workings and mucking it up. I had played for a spell within the Android universe, a system that encourages and embraces tinkering and augmenting at all levels and, as I’ve written on my own blog Near-Earth Object, I grew weary of the all the choices. When something didn’t quite suit me, or I suspected I could squeeze more power, more battery life, or what have you, out of the device, I would feel personally responsible to make it happen. This is similar to how I felt back when I was a Windows user pre-2004. In the abstract, it’s great to have options, but I began to be exhausted by them.

Apple, in its iron-fist theocracy, leaves few choices beyond ringtones and wallpaper. As someone who is not a programmer and simply wants his tools to work well and seamlessly with each other and other services, that’s pretty much just fine with me. Apple, you make the decisions, and I will just take part.

This is very much a parallel to religion. Let’s take AppleScript out of the discussion, and think more in terms of all of Apple being “catholic” and Android/Windows being “protestant.” In a reformed religion, one is freer to find their own way to God, and they become responsible for finding that path and establishing that ideal oneness with the Almighty. An orthodox/catholic faith, on the other hand, spells it all out in advance. In order to get good with the Big Man, you need to follow the rules, buy into the dogma and the catechism, and then your decision-making is over. It is, counterintuitively, a kind of freedom, because it takes away the burden of forging this path for yourself. It takes away the burden of having to decide what is right and wrong. One is “free” within the parameters.

Obviously, when it comes to religion, I am neither Catholic nor Protestant, but “none of the above.” But with my consumer tech products, I have found, even after dabbling with the reformers, that I prefer the orthodox. Blind faith to dogma in religion is dangerous and has existential implications. Blind faith to a technology company, while maybe not admirable from a skeptics’ point of view, is relatively benign.

And, to me, anyway, it’s spiritually freeing.

And so I say, of The Steve, peace be upon him.

July 20, 2013
New Christian Children's Book Takes Them on a Tour of Heaven
Next Post

July 20, 2013 A Video Takedown of Josh McDowell's The New Evidence That Demands A Verdict
"https://media.giphy.com/med..."
WallofSleep Orthodox Christians in Cyprus Are Protesting ..."
"Now with this statement you're erasing transgender people.Disagreeing with the statements of one trans person ..."
Holms Preacher Andrew Wommack: Trans Rights Supporters ..."
"Each one worse (and more Texan) than all the others."
red-diaper-baby 1942 Conspiracist: I Pretend to Be a ..."
"I'm old skool. I use a pirated copy of windows 98. O_o"
Cozmo the Magician Conspiracist: I Pretend to Be a ..."
Browse Our Archives
What Are Your Thoughts?leave a comment