Christian Pastor: ‘I Have Never Met Anyone Who is Actually Happy About Having Sex Before They Were Married’ July 19, 2013 Hemant Mehta

Christian Pastor: ‘I Have Never Met Anyone Who is Actually Happy About Having Sex Before They Were Married’

Aaron Buer is a pastor at Ada Bible Church in Grand Rapids, Michigan, and he’s made up some very important facts about sex (emphases his): 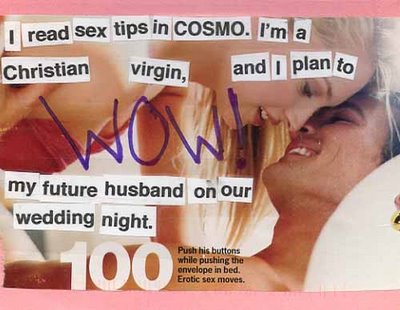 God designed sex. Whoa…that’s a weird thought. But, it’s a true. Sinful humans didn’t invent sex. Sex isn’t dirty or gross. It’s good and beautiful. In fact, sex is beautiful because it was God who invented it and gave it to us as a gift.

With all that said, sex is also incredibly dangerous because God designed it for a specific context. According to the biblical account, sex is for marriage and nowhere else. And, the biblical writers gave us a bazillion warnings about misusing sex.

Why? Because God designed sex as a way to forever cement two people together. Sex literally and symbolically unites two people — physically, emotionally and spiritually. There is no going back on the union either. “Just kidding” or “oops” doesn’t do anything to erase the connection.

I have also seen evidence of this reality in the people around me. I have never met anyone who is actually happy about having sex before they were married. All I’ve ever seen and heard is massive regret.

For some reason, I’m thinking he needs to hear from some of you who lost your virginity before marriage and have no regrets whatsoever… maybe we can break through this bubble of his that’s apparently impermeable to science and dissenting voices. (Though, in Buer’s case, permeating his bubble may require an eternal union of some sort…)

Good luck getting through to him, too. When one commenter suggested there were biological reasons for sex, Buer response was:

Well, since neither one of us was there for the origin of sex, I guess we’ll just have to disagree.

Right. The “origin of sex.” Which I assume happened sometime in the Garden of Eden as God played voyeur.

***Update***: To no one’s surprise, when faced with evidence that plenty of people don’t regret having premarital sex, Buer turned off his comment thread and deleted the ones that contradicted his beliefs. Because that’s what Jesus would’ve done.

Looks like you can still let him know what you think at @aaron_buer, though.