After Penn Jillette’s amazing doughnut and bacon party last night (Yes, I did eat two Krispy Kremes and about three pounds of bacon, thanks for asking) and some technical issues this morning, we’re back on track!

I’m just catching the tail-end of his talk, but I made it in time to hear him talk about busting a so-called miracle, and being forced into hiding.  When the Catholic Church asked for an apology for hurting their religious sentiments, here was his response:

And, cue the standing O:

It was really very moving- emcee George Hrab fittingly reminded us to not take our ability to be skeptics without being in danger for granted.

Next up, another panel!

Okay, so philosophy is not in my wheelhouse, so I’ll do my best to get through this one for you fine folks.

Hack made an interesting point regarding using the term “scientific” as a catch all for solid critical thinking and good science- there’s bad science out there that we need to watch out for.

Pigliucci railed against Lawrence Krauss for saying that philosophy is dumb (obviously that’s paraphrased…) for a few minutes.

So, does philosophy give skepticism anything? Frankly, I have no clue. Sorry, guys, but a lot of it kind of went over my head.

But here’s a cool picture that Mikey took!

The Hockey Stick and the Climate Wars

Just finished up a faaaaacinating interview with Karen Stollznow, so I am dropping into Mann’s talk a little late. Slightly disappointed to find that it is not about the temperature of the arena when the Blackhawks play. (It’s a sports joke, guys!)

So, we’re talking about ClimateGate, when the emails of climate change scientists were made public.

I missed most of the science part, but did hear about the political resistance that climate change scientists are facing. Okay, he wrapped up and the Skeptic’s Guide to the Universe are coming up.

Skeptic’s Guide to the Universe

I’m pretty excited about this one– I am a fan of the Skeptic’s Guide podcast. A handful of them went to the Grand Canyon before the conference, so they’re going into the science behind it.

And now onto what will happen to the world in a few billion years when the sun becomes a supernova. I’m glad they’re essentially just doing a live podcast- they’ve got the banter thing down pat.

On to sailing stones. I wasn’t familiar with them, but they are massive 700 pound rocks that have been moving through the desert over many many many years, and they leave a trail like this: 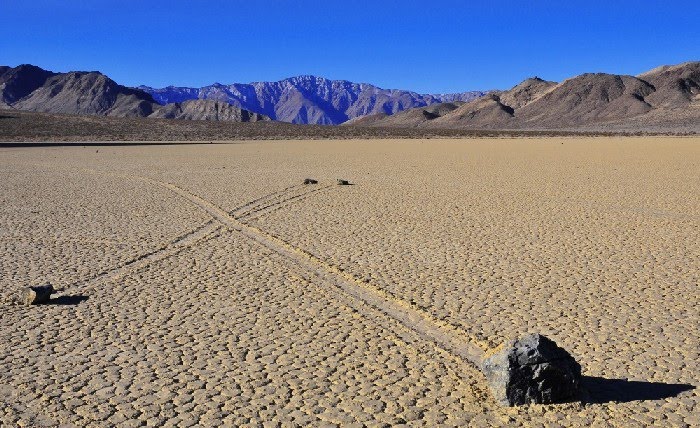 Apparently, the mystery has finally been solved. Essentially, the desert can freeze and as the ice thaws, the rocks can be moved by nothing more than a light breeze. Evidently, there is a similar phenomenon in the arctic.

The sailing stones, naturally, led to scrotums  and testicles. Surprisingly, my knowledge of the evolutionary theories that led to mammals possessing scrotums is lacking, but I really am enjoying the talk about the theories behind it.

Science or Fiction! If you’ve never listened to the podcasts, Steven gives three science-related news items, two of which are real and one is fake. The other hosts have to figure out which is the false one.

Here are the choices:

Jay picked #3 as the false one, everyone else went with #1 as the fiction.

I will not attempt to explain them, because I will inevitably butcher it. I believe they will release this as a podcast, so I highly recommend checking it out.

We’re off to lunch now. This afternoon is packed with interviews for us, so I’m not sure how many talks I’ll be able to cover, but I’ll do my best!

July 13, 2013
While They Raised Money for Atheist Tornado Victim, He Was Capitalizing on the Generosity for Personal Gain
Next Post

July 13, 2013 BuzzFeed: The 21 Things Atheist Girls Love
"More money for someone."
Joe King Christian Mommy: Female Preachers Are Heretics ..."
"It's a bit late for that -- in case you haven't noticed, lots of revelations ..."
Raging Bee VICE News Covers Sex Abuse at ..."
"https://uploads.disquscdn.c..."
bombcat Christian Mommy: Female Preachers Are Heretics ..."
"Yes, he did have COVID and survived. Unfortunately. (You had one job, Delta....) Probably benefitted ..."
paganheart Rick Wiles: We Must Launch a ..."
Browse Our Archives
What Are Your Thoughts?leave a comment