Christian Forgiveness: It’s a Bug, Not a Feature

Yesterday, I briefly highlighted three cases of ex-convicts who got jobs as Christian pastors. The trust of their flock was the only protective cloak they needed to rape and murder again; so rape and murder they did.

In the case of Michigan pastor John D. White, who killed a young woman and is believed to have had sex with her dead body, the congregation that hired him knew he had a rap sheet full of violence. But White had embraced Jesus. No more was needed. His conversion and ordainment quelled all suspicion, worry, or second thought. An actual minister would never do anything truly bad, would he?

Forgiveness is always available from God — damn the consequences.

Christians think of redemption as a feature of their faith. But what if it’s a bug? 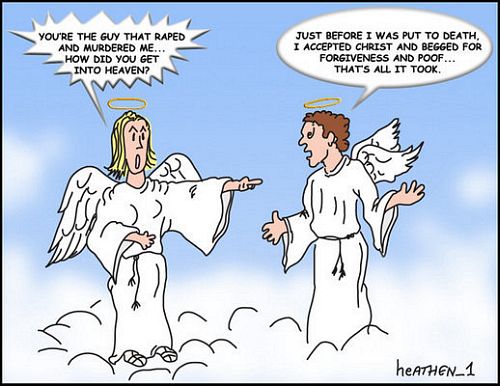 To the Almighty, nothing is unforgivable. Let that sink in. Nothing. You can be a genocidal maniac who eats crushed-up infants on toast during snack time… and still go to heaven if you eventually repent.

Which is pretty much exactly the career path chosen by Joshua Milton Blahyi, a Liberian pyscho-warlord-turned-preacher who’s known as General Butt Naked (yeah, for real). Some people call him “the most evil man in the world.” He started his career at age 11 by sacrificing small children to his tribal God: With the help of his followers, he would unclothe them, ritually kill them, and share their flesh during a days-long feast.

In the early 1990s, he transformed himself into a fighter for the government of Roosevelt Johnson. Blahyi quickly built on his reputation as a ruthless killing machine, earning his peculiar nickname because he and his boy soldiers, hopped up on coke, would storm into battle without wearing anything except for combat boots and weapons; they believed their bare skin magically deflected enemy bullets.

General Butt Naked says he personally took about 20,000 lives, many by decapitation. He and his soldiers would often play soccer with the severed heads.

But none of the bloodshed and depravation matters. If any of the rapes, murders, mutilations, or acts of cannibalism ever weighed on the general’s conscience, they don’t anymore. Because today, Joshua Blahyi is a Christian. After bathing in blood for decades, and having “nightly conversations with the devil,” he had an epiphany. He saw Jesus. And the Lord Christ, having died on the cross for sins even as unimaginable as Blahyi’s, forgave him.

That’s God and his Son for you. They are literally in the forgiveness business, and the desired result is all but guaranteed almost as soon as you ask for it and declare your allegiance to the Darling Duo. Easy-peasy.

Now General Butt Naked is fully clothed and preaching the gospel, driving around town in a red Mercedes with an improvised vanity plate that says "Be Holy.” 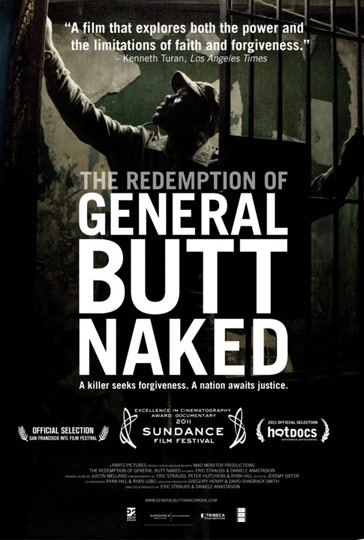 This cavalier attitude toward guilt and consequences is everywhere in Christianity. For instance, did you know that con man and whoremonger Rev. Jimmy Swaggart has been making a comeback? After the extent of his shenanigans came to light in 1988, and when blubbering on TV didn’t help, the erstwhile televangelist seemed destined for the same trash heap of history where his equally corrupt rivals Jim and Tammy Faye Bakker ended up. Well, the Lord has blessed Swaggart (rhymes with Haggard) once again. The now-white-haired itinerant preacher draws crowds everywhere he goes.

[I]n August, he’s scheduled to make a rare crusade appearance in Niagara Falls as part of “Field of Miracles, the Return,” a three-day event in Sal Maglie Stadium sponsored by the Joshua Revolution and a host of area churches. Organizers of the event say they believe God is using Swaggart to spread a message of hope, forgiveness and restoration in a city with desperate needs. … [They] are hoping for at least 10,000 people to attend the event.

Culpability and shame are washed away with such startling effortlessness in Christianity, it makes me despair sometimes. Evildoers are habitually excused with lines like “He was possessed by Satan, so it’s not his fault.” The other, only slightly longer path to redemption is for the sinner (let’s say, Pastor Geronimo Aguilar) to claim to have a weakness; and because of his failure to pass the test from God — to which the proper response is a show of remorse, spiced with a dash of humility and a crocodile tear or two — he ends up coming out … a better Christian.

Just imagine if that’s how it worked in schools — that by flunking, for instance, a math test, you can automatically claim to have become better at math.

It appears to me that these teflon pastors are just like that — and just like the Atlanta street criminals from this study, who

… seemed to go out of their way to reconcile their belief in God with their serious predatory offending. They frequently employed elaborate and creative rationalizations in the process and actively exploit religious doctrine to justify their crimes.

(I wrote more about it here, fleshing out the possibility that a belief in a sin-absolving Jesus makes it easier for people to offend and re-offend.)

Atheists and agnostics have no confessor or savior to wash away their sins. If they mess up, it’s on them. If they possess even an ounce of conscience, their missteps will haunt them. Their guilt will gnaw at them. No shortcuts to (self-)forgiveness exist. They can’t go to church to pray and tell their chosen deity’s offspring how sorry they are, and then walk out secure in the knowledge that the Master of the Heavens has already forgiven them. They are responsible for what they did.

That’s a good thing, because it’s a very powerful preventative.

As unlikely as it may sound to the religious, not believing in an understanding, magnanimous god may be a big part of what keeps atheists on the straight and narrow.

And if you don’t believe that, I forgive you.

(cartoon by heathen_1 via haha.nu)