Illinois Family Institute: ‘The Male Homosexual Community Has a Serious Problem with Pedophilia’

A lot of Christians say that they love gay people even if they disagree with their “lifestyle” and that it’s unfair to accuse them of “hating” gay people.

Well, read this article and you’ll see why those accusations are made.

Laurie Higgins of the Illinois Family Institute begins her piece by sharing stories of gay couples who did awful things to their children involving child pornography, sexual abuse, and prostitution… just awful, awful things. Of course those parents are to be condemned and put behind bars.

And then she makes the Hateful Leap:

That’s not politically incorrect — that’s incorrect, period. And untrue. And unfair. And the sort of thing Higgins would never let people get away with if they said Scott Roeder, James Charles Kopp, and Eric Robert Rudolph were all Christians who killed abortion doctors, so the Christian community at large must have a serious problem with murder.

You don’t take a few horrible people and use them as representative of an entire community, especially when the issue at hand was something far different than homosexuality.

You know that logical fallacy people make when they say Stalin was an atheist and therefore atheism is somehow a bad thing? That’s what Higgins is doing here.

She keeps digging in, too:

The Catholic Church’s sex abuse scandal was primarily homosexual in nature. In other words, all of the predators were male and the vast majority of their victims were male.

Right… I’m sure power, proximity, and the Church’s rules on celibacy had nothing to do with it whatsoever. It’s just a gay thing.

Then, Higgins backtracks a bit:

Higgins tries to back up that claim, but offers no citation for it:

Though male homosexuals constitute between 3-4 percent of the population, multiple reports suggest they commit a statistically higher rate of sexual abuse than do heterosexuals.

That’s one of those myths that’s been debunked so many times that Higgins must have willfully ignored all the evidence to the contrary in order to say that with a straight face. (Or type it without an “LOL,” I guess.)

Finally, Higgins explains why gay people shouldn’t be allowed to have children:

For multiple reasons children should not be placed in the homes of homosexuals. First, homosexual acts are inherently immoral. Second, there is evidence that many homosexuals find nothing problematic about sex between adult males and minors of diverse ages. Third, homosexual couples are more unstable than heterosexual couples. Fourth, for many male homosexual couples, fidelity does not include sexual monogamy. And finally, children have an inherent right to be raised by a mother and father…

4) This is a red herring. Many gay couples are monogamous. Some have open relationships and are honest about it with their partners. But to suggest that strict monogamy is the only proper setting for a children without any consideration of what the other options entail is ridiculous. (Obviously, heterosexual couples work the same way, but that would complicate Higgins’ argument so she ignores it.)

5) Children should be brought up in an environment where they have people to care for them. A mother and father? Great. A single parent? Great. Adoptive parents? Great. Two men? Great. Two women? Great.

Most of this is common sense to anyone who’s not a bigot. 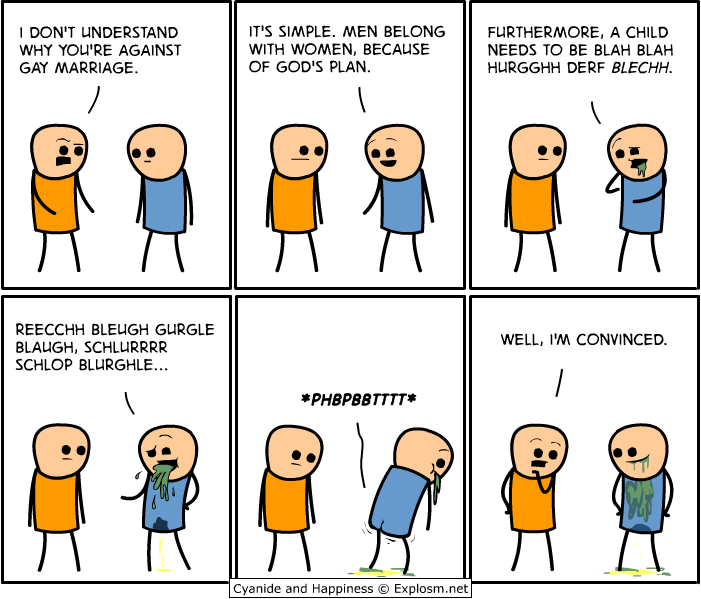 Higgins is just looking for reasons to discredit gay parents. But since that evidence isn’t there, she’s just settling for already-debunked right-wing talking points.

July 5, 2013
Pastor Claims He Was Curing a Boy's Headaches... by Sexually Forcing Himself on Him
Next Post