Could Baker, Louisiana Be a Candidate for the Next Atheist Monument? June 30, 2013 Hemant Mehta

Could Baker, Louisiana Be a Candidate for the Next Atheist Monument?

Back in 2009, a Ten Commandments monument was placed in a public park, near a public school, in Baker, Louisiana:

It was paid for and put up there by former city councilman A.T. Furr and he wasn’t alone in his endorsement of this idea. Even Mayor Harold Rideau supported it, saying “We’re a Christian-based community.”

Another council member, Jimmy Pourciau, added his support, but when he was asked if he would support a similar atheist monument, his response didn’t come so quick: “I’d have to see it first,” he said at the time.

The city’s attorney, Ron Wall, said at the time that this was a bad idea; he “believe[d] the plaque would have to come down in a legal battle.”

But no one sued.

Blogger Randall Hayes was near that park earlier this month and he was curious whether that monument was still in place.

Yep. It was still there, hovering right behind the park’s name: 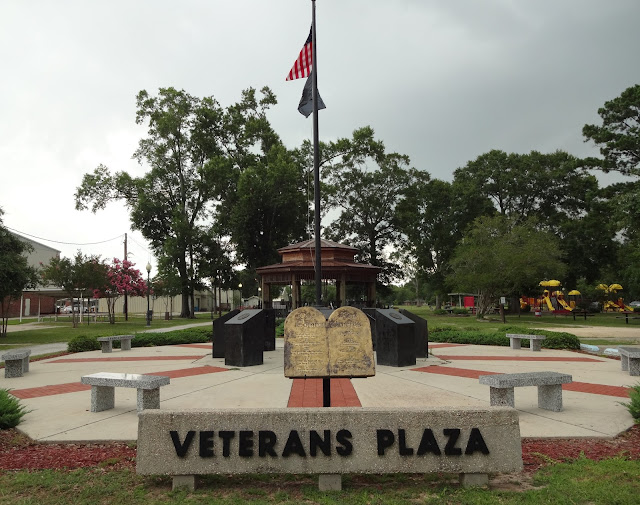 The Baker Decalogue would be fine on a church lawn or on some other private property, but placing a sectarian religious monument so prominently in a city park that is supposed to honor veterans is an insult to all the U.S. military men and women who were not followers of that sect. It is also, as the Baker city attorney advised, a violation of the Establishment Clause. It’s not too late for the city to do the right thing and have the religious monument removed for Veterans Plaza.

Randall thinks it’d make a great candidate for American Atheists’ next atheist monument; Baker is suffering financial difficulties right now. They don’t have money to waste on a lawsuit. They would be forced to either take down the monument or accept one from AA.

Makes sense to me, too. Dave Silverman, what do you think?

June 30, 2013
Abusive Pastor Calls Out and Humiliates Members of His Flock During Sermon
Next Post

June 30, 2013 Video of the Atheist Monument Dedication Ceremony in Front of the Bradford County Courthouse
"Maybe Paul truly meant it or maybe it was just rhetoric. Who knows? Either way ..."
Foxglove Angry Christian Mom: The “Blue’s Clues” ..."
"You better believe it, hunny bunny."
Dred Pumpkinhaid National Review: TX Valedictorian’s Abortion Rights ..."
"And TDS strikes again.Only a matter of time."
Dred Pumpkinhaid National Review: TX Valedictorian’s Abortion Rights ..."
"You mean AS effective against killer rabbits as against the antichrist."
ImanIdram Klingenschmitt: Biden is Letting the Antichrist ..."
Browse Our Archives
What Are Your Thoughts?leave a comment