The cover story in this week’s Time magazine, written by Joe Klein, is all about how volunteering and doing service projects may help curb the effects of posttraumatic stress disorder (PTSD) on our veterans: 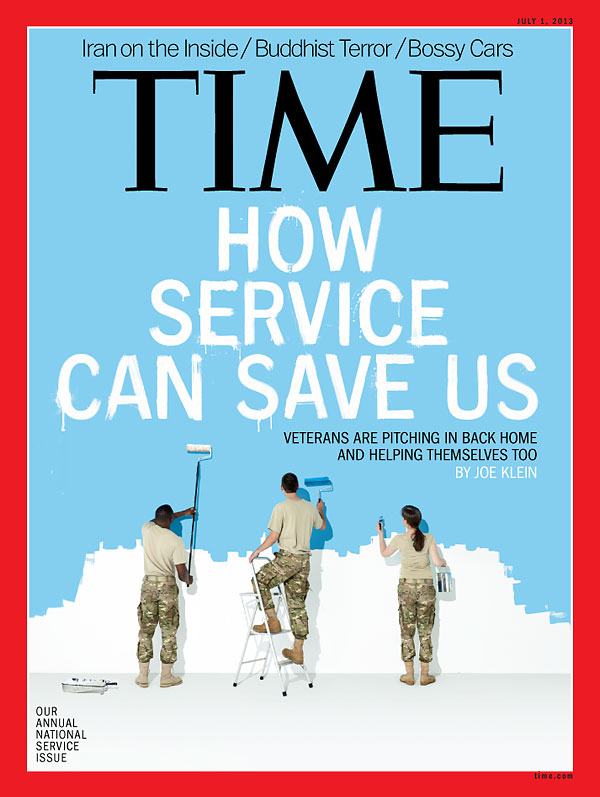 [Co-founder of volunteer group Team Rubicon] Jake Wood has little tolerance for veterans who see themselves as victims. Posttraumatic stress is, he believes, a condition that can be battled and defeated. “If you’re out doing disaster relief,” Wood says, “you’re less likely to be thinking about yourself and more likely to be thinking about the people you’re helping. You’re also presenting yourself, and other veterans, as a model, as a potential community leader.”

Okay. Sounds all well and good. The article goes on to note that doing these projects can help veterans in any number of ways, including providing them with “health and psychological benefits… greater longevity, reduced depression, and a greater sense of purpose.” All of that makes sense.

As part of his reporting, Klein joined one of the disaster relief groups and worked at a site damaged by the Oklahoma tornadoes… and that’s when he wrote this:

… there was an occupying army of relief workers, led by local first responders, exhausted but still humping it a week after the storm, church groups from all over the country — funny how you don’t see organized groups of secular humanists giving out hot meals — and there in the middle of it all, with a purposeful military swagger, were the volunteers from Team Rubicon.

Wow. My jaw dropped while reading that because it’s absolutely not true.

Klein took a cheap shot at atheists for not doing the relief work that churches — with all the personnel and financial advantages they have at their disposal — were doing even though we were often working right alongside them! He made the same mistake that Minister David Brassfield did (though at least Brassfield eventually offered a semi-apology).

Klein is simply lying out of his ass. A simple Google search would’ve turned up a number of ways atheists helped in the wake of the Oklahoma tornadoes. But since Klein was too lazy to do it, I’ll do it for him:

Is that enough proof that atheists, too, were (and still are) helping out in the aftermath of the tornadoes?

Maybe Klein didn’t know any of this was going on because, as Tancredi points out, “these [Humanist] groups have no tax exempt status and therefore can’t exactly afford to have the t-shirts for everyone to wear so that you know when they are out in force during a volunteer effort.”

Let’s make this very clear: Atheists were in Oklahoma doing everything Christian groups were doing — including handing out hot meals. To suggest that we were not there and not doing anything useful for the victims isn’t just factually wrong — it’s slander against all of us who don’t believe in a God.

If Klein had mentioned any other group of people — “funny how you don’t see organized groups of Jews giving out hot meals” — you know there would be hell to pay. There should be an uproar now, too.

Joe Klein and Time magazine owe their readers — and atheists everywhere — an apology.

Time might be more likely to respond if enough of us call them out on it. Write them a letter and let them know what you think. Spread word online that you won’t stand for this. Consider canceling your subscription (if you haven’t already). Not only did Klein perpetuate an unfair stereotype against atheists, anyone at the magazine who read over the piece must have had no problem with it, either.

It’s unacceptable and we can’t stand back and let it happen without saying something about it.