Are Christians Happier Than Atheists on Twitter? June 21, 2013 Hemant Mehta

University of Illinois psychologist Ryan Ritter just published a study in Social Psychological and Personality Science in which his team analyzed tweets from Christians and atheists — known as such because of the people they followed:

Ritter and his colleagues analyzed more than 877,000 tweets from 7,557 Christians, and more than one million tweets from 8,716 atheists. The believers were followers of one or more of five major Christian public figures (Pope Benedict, Dinesh D’Souza, Joyce Meyer, Joel Osteen, or Rick Warren); the non-believers followed one of more of five well-known atheists (Richard Dawkins, Sam Harris, Christopher Hitchens, Monica Salcedo, and Michael Shermer).

(For those who don’t do Twitter, Salcedo — a.k.a. @Monicks — is known for tweeting atheist aphorisms/quotations/etc.)

By looking at the kinds of words the followers used, Ritter confirmed what we might have expected:

The results: In their tweets, Christians expressed more positive emotions, and fewer negative ones, than their atheist counterparts. In contrast, the non-believers tended to use “a more analytical thinking style,” which, the researchers write, is “associated with less happiness.” 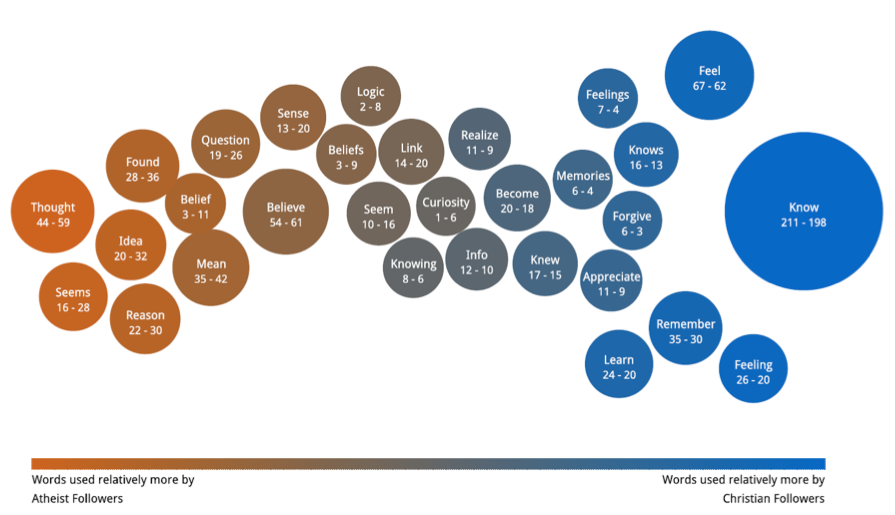 I don’t doubt the conclusions. But just for the sake of it, let’s ask some important questions:

Were the researchers right to use the people they did as representatives of who Christians and atheists would follow?

Calculating whether someone is Christian or atheist based on who they follow on Twitter isn’t even close to a perfect science. I follow the Pope. I followed Rick Warren until he blocked me (yep). And many, many Christians would tell you that Meyer and Osteen and D’Souza practice a version of Christianity that perverts the Gospel in some way or another. Ritter acknowledges all of this, but still believes the method works because of the sheer number of tweets and followers analyzed:

… people can follow these public figures for reasons wholly unrelated to their religion. Despite the imperfect nature of this sampling method, the large-scale nature of Twitter data appears robust.

The atheists are more representative, I think. But another small issue: the @ChrisHitchens account that was analyzed is neither verified nor very productive — posting 10 tweets total, most of which were links to videos on a now-defunct website. Make of that what you will.

Also, given what Dawkins and Harris tweet about, they’re more likely to draw people who are generally more pissed off about religion (i.e. not “happy”), as opposed to casual atheists.

For what it’s worth, the researchers said that, of the thousands of people they analyzed, “[t]hirteen followers… were following both a Christian and an Atheist public figure in our sample, and were excluded from the final analysis.” So people like me wouldn’t have been included in their sample.

What should we make of the fact that Christians seem happier on Twitter?

Well, I suspect that, much like you’d find in the blogosphere, atheists on Twitter tend to be defensive, reacting to events that make us upset/angry, while Christians tend to write about their relationship with God and other things that make them happy. These are huge generalizations, of course, but it’s what I’ve experienced.

We’ve seen studies that show religious people have a higher level of wellbeing than atheists — but we also know that wellbeing improves when you’re part of a close-knit community and are frequently given reasons to be optimistic. Churches provide both of those things and atheists have to essentially fend for themselves or create alternatives that are nowhere near the scope or size of what religions provide.

Do the words we use accurately reflect our happiness levels?

This is tough to say. Atheists are (in theory) skeptical and more interested in what’s demonstrably true than religious people are, even if those answers don’t always make us happy. Our word choices reflect that. Of course we’re not certain about everything. Of course we’re less likely to be swayed by emotion. But atheism isn’t synonymous with depression.

Ritter even alludes to this in his analysis:

Indeed, non-religious people are equally happy as religious people in non-religious nations (i.e., where they fit in…), and increasing the perceived prevalence of atheism can decrease anti-atheist prejudice… In other words, increases in happiness among non-believers should parallel increases in the availability of secular social support resources and increased feelings of being respected in society, both of which facilitate increased happiness.

Given all of this, if there was a more accurate way to discern who’s atheist and who’s Christian on Twitter, I don’t think you’d see very different results.

Just bear in mind that the link between happiness and religion should not be seen as justification that there’s something “right” about religion. The fact that religious people seem happier doesn’t suggest that their beliefs are true, but rather that their beliefs can be powerful placebos.

(Thanks to @l_chambers for the link!)

June 21, 2013
Insane in the Brain: A Rare Video of Mass Murderer Jim Jones Preaching
Next Post

June 21, 2013 She Was Kicked off Her School's Football Team Because the Bible Said So
Browse Our Archives
What Are Your Thoughts?leave a comment