Good Reasons to Be Scared of Atheists June 15, 2013 Hemant Mehta

Good Reasons to Be Scared of Atheists

David Hayward is on a roll with his list of reasons to be scared of atheists: 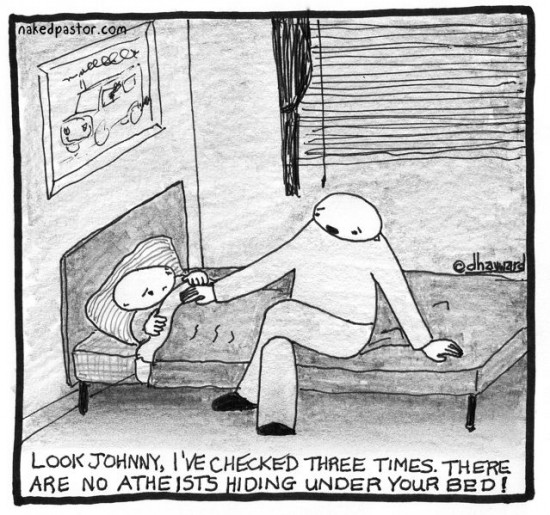 4. There are some atheists out there who would challenge your beliefs and question your assumptions, even respectfully, which can make for a very difficult conversation.

6. There are some atheists who are actually good people and because of this will really complicate your tidy categories of who’s in and who’s out.

8. There are some atheists who, because of their quality of intelligence and character, will upset your faith and make you wonder why your God should punish such a person.

Turns out we’re scary because we’re not scary at all.

Wendy Thomas Russell adds that Christians fear us because they just don’t know us:

… those who fear us… obviously don’t know us. (Dudes, we are so nice! You wouldn’t believe how nice we are!) They misunderstand our motives and our beliefs. Maybe they think we condemn their God…, or that we embrace their Satan, or that we don’t think believers should believe. Maybe they think we are selfish and out to do bad, amoral things in the world. (Because, you know, doing good things for the sake of doing good things is just plain silly talk.) Also, they may be scared to contemplate a life without the promise of an afterlife, and don’t need us “going all negative” on them. In all likelihood, we are threatening because we stand in the way of their own peace of mind.

June 14, 2013
Speaking in the Carolinas This Weekend
Next Post