Her Eye Doctor Wanted Her to See Jesus

Joanna Clark is a part-time calligrapher and full-time assistant language teacher in Japan. She’s been there for almost three years, and plans to return to the United States this summer. When she does, she’s going to be reminded how different the countries are in how they practice their respective religions.

I’ve never heard a Japanese person speak about religion except in a historical context,

…Joanna wrote me in an e-mail.

Most of my friends and co-workers have never mentioned having a religion, or have said outright that while many Japanese people consider themselves Shinto or Buddhist, very few actually practice specific beliefs. It does not seem to have much bearing on individuals’ lives or on society as a whole.

I’d gotten in touch with Joanna because I was interested in something that happened to her in her hometown, Chattanooga, Tennessee, six years ago, when she was 19.

Home from college on a break, she wanted new reading glasses, so off to the optometrist she went. Joanna happened to be carrying a Tokidoki LeSportSac whose two sides represent heaven and hell. Here’s a close look at a similar Tokidoki purse: 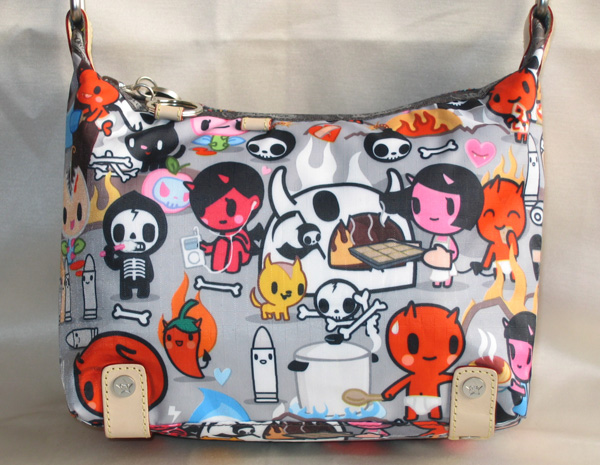 After allowing a technician to put a solution in her eyes to dilate her pupils in preparation for a vision test, Joanna was asked to wait. Magazines soon became too blurry too read, but she noticed a Rubik’s Cube adorned with a picture of Jesus and started fiddling with it.

The technician returned with a colleague and the optometrist, and the trio sweetly asked to see her bag. Joanna, not suspecting what was about to come, held it up for them.

Things immediately got weird. Instead of the praise I had expected to receive for my fashionable accessory, I got teeth-sucking and awkward silence. The doctor picked up the Cube I had put down, and got close.

“I see you’ve been thinking about God,” he said. He twisted the Cube in his hands. “I guess,” I started, unsure and awkward in the face of an examination of my religious beliefs.

As religiously unidentified liberals in the third most Bible-minded city in the United States, my family has always been very conscious of how we deal with discussions of religion. I grew up learning that I needed to respect other religions while keeping quiet about my own beliefs.

The optometrist and his staff, however, had no such scruples.

When the optometrist told me that I wasn’t taking Jesus seriously enough, I nodded numbly, years of silent accommodation informing me. He told me hell wasn’t something to be taken lightly. He never bothered to ask me if I believed in hell; I don’t.

When he asked me if I wanted to pray for forgiveness for owning a bag that depicted hell, I must have choked out a scared noise that he took for assent. One of the technicians locked the door, and they all pulled their rolling chairs close around me.

They made me repeat after them, words that may as well have been nonsense for all they meant to me, until they were sure that I was taking Jesus seriously. I felt powerless to stop them, afraid to offend them, and too polite to try to leave in the middle of an “exam.” My palms were sweaty and my heart was racing.

Afterwards, the optometrist acted as if nothing out of the ordinary had happened. He performed the eye exam. When it was over, Joanna, in a daze, picked out her frames, left the building, got into her car, and had a good cry right there in the parking lot.

Those technicians and the optometrist were the authority on eyes, not religion, and no matter how many times I retell this story for laughs at a party — it goes over like gangbusters with non-Southerners who already suspect us all of being religious zealots — I will never see what they did to me as anything but a frightening violation of a young girl who had a cute purse but little power to stop them.

Before Joanna’s eye-care visit, religion wasn’t something she had a problem with. Now, when she hears someone talking about Christianity in a more than casual way, she gets deeply uncomfortable.

In the comments on Joanna’s post on xojane.com, other people weigh in with scarily similar experiences. One commenter, raw from a funeral, had a boss who seized the opportunity to bag a soul for Jesus. The woman suddenly pounced:

“Have you accepted the Lord Jesus Christ as your personal savior?” In my weird state I think I mumbled “Umm… I’m not sure.” And the next thing I knew, she was grasping my hands and making me repeat after her… Taking Jesus as my personal savior and saving my soul. Looking back, I continue to be appalled that she not only took advantage of me in my shocked state of mourning, but she abused the boss/employee relationship.

Can it get more outrageous? Sure it can: 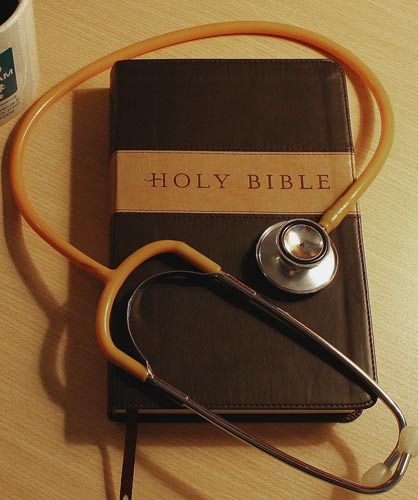 When I was pregnant with my daughter I had to go to a separate place for a pregnancy test to get on medicaid. When I got there, I was put in another room to wait for my results. They said they were going to play a video. I thought OK, must be about pregnancy. Instead, it was an abortion video. A gruesome one. I had not even told them that was what I was considering (and I wasn’t!). They came back in and I was so angry I couldn’t look at them. They then handed me a Bible and asked me to pray with them. I said hell no and walked out, using the bible as an umbrella (it was raining.)

This one, for me, takes the cake:

My husband is a Christian but I’m not. We went in for a biopsy when he had stage-3 cancer and the patient application asked for religion. I warned my husband to leave it blank but he filled it in. Sure enough, we get in and get my husband all set up and the doc comes in and says, “I notice you’re Christian, can we pray?” This made us very uncomfortable because he assumed we must both be. My husband apologized profusely to me afterwards, and promised not to do it again. It was an inappropriate question both on the sheet and in person. Hard to say no to a doc who’s about to have your husband put under and cut him up right next to his jugular.

Christians who sport this kind of conversionist zeal — like a badge — probably feel quite proud of themselves.

The rest of us, however, see them not as ambassadors of their faith, but as overbearing browbeaters we’d do almost anything to avoid.

Spreading your religion (should you deem it necessary at all) can be accomplished by getting as close as you can to leading an exemplary life, full of small acts of neighborly kindness. Those are the Christians I can love and respect. Be gentle and introspective. If your God brings you peace and joy, I’m happy for you. I’ll even be fine with the occasional Facebook post about your celestial friend, no worries.

Just know that when you try to talk me into joining your pervasive cult, about which I must hear every day as it is, you lose me. Us. Millions of us.

Even those who are confused seekers, seemingly ripe for the picking, will probably notice the breezy nerve with which you operate, and conclude that your god is one who attracts showboats and bullies. We really shouldn’t have to talk about how you go from annoying to unethical when you proselytize to vulnerable people over whom you hold power, such as in the four examples cited above.

For the love of all that’s good, stop now.

(Thanks to Dave Hitt for the link!)

May 30, 2013
What Are Atheists Doing for the Victims of the Oklahoma Tornado?
Next Post