Father Gabriele Amorth Says He Has 160,000 Exorcisms to His Name

Mention Pope John Paul II to people who are possessed by evil spirits, and sometimes they’ll literally froth at the mouth in fury. That’s because the late pontiff was a first-class exorcist whose God-given powers are still feared in Satan’s dark realm.

How do we know this? It comes from Italian priest Gabriele Amorth, the founder and honorary president of the International Association of Exorcists. (This site’s own Sara Lin Wilde mentioned him in a post earlier today.)

Father Amorth’s name couldn’t be better if J.K. Rowling and Dan Brown had made it up together. How much do I love it? Let me count the ways.

It has amor and mort in it (“love” and “death” in Spanish and French, respectively). How is that not awesome (and voldemortifying if you’re a demon)?

Moreover, somehow “Amorth” teases and taunts you into trying to read it backwards (a well-known satanic device).

The phoneme rth calls to mind Darth, a modern-day arch-fiend (or devil, if you will).

Father Amorth possibly inspired (I’m just guessing here) the Marvel Comics character Gabriel the Devil Hunter (pictured below, left). They have their name, their rare occupation, and their Italian heritage in common. 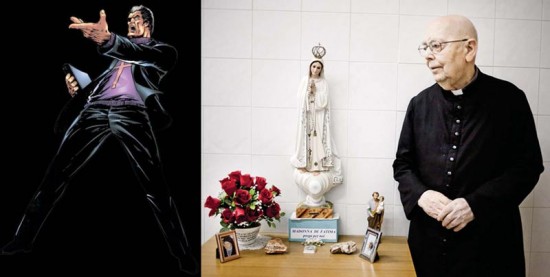 And that name, that wonderful name, is just a part of why I’m so enamored with the Catholic demon-slayer.

Consider Father Amorth’s work ethic. Would you believe that he has performed, by his own count, 160,000 exorcisms? The man is 88 years old. If he started rassling evil spirits when he was 20, and worked diligently six days a week and 50 weeks per year, that averages almost eight exorcisms per day. He’s like a Catholic Wilt Chamberlain.

Then again, according to his bio, he didn’t officially become an exorcist until 1986, and retired in 2000. That would be 14 years of righteously kicking demon butt, with 38 exorcisms on an average work day (one every 13 minutes).

Father Amorth, perhaps feeling his years after all those extractions of paranormal brutes, is now looking to expand the Vatican’s devil-hunting brigade. He told British newspaper the Sunday Times:

“I will ask the pope to give all priests the power to carry out exorcisms, and to ensure priests are properly trained for these, starting with the seminary.”

This may be a propitious time for such a request. Although (as we pointed out) the Vatican denies it, and modern Catholics may sniff at casting out demons as a throwback to a darker, dumber time, Father Amorth believes that pope Francis himself performed an impromptu exorcism only ten days ago — in public, no less.

“The Pope’s exorcism is a splendid sign because one of the main causes of today’s atheism is that people don’t believe in the devil anymore. Jesus said: ‘Who is not with me is with Satan.’ “

Two helpful tips to stay on the straight and narrow, according to Father Amorth: Skip the yoga, and for God’s sake, cut it out with the Harry Potter already!

“Practising yoga brings evil as does reading Harry Potter. They may both seem innocuous but they both deal with magic and that leads to evil. Yoga is the devil’s work. You think you are doing it for stretching your mind and body but it leads to Hinduism. All these oriental religions are based on the false belief of reincarnation.”

If that is so, demonic possession may be even more widespread than pessimists assumed, considering that at least 500 million children (and some adults too) have read the Harry Potter books, and that perhaps a billion people have bought a Harry Potter movie ticket (to say nothing of DVD and videogame sales). Add to that tens of millions of yoga practitioners (15 million in the U.S. alone), 1.1 billion Hindus, and of course, hundreds of millions of atheists, and you can see why Father Amorth’s posse of devil-fighters needs more recruits.

I love that, like Catweazle or Philip J. Fry, Gabriele Amorth seems to have been catapulted into our midst from another time or a different dimension, his fundamental loopiness almost papered over by a wide-eyed innocence — a belief that the world, not he, is overcome with craziness.

Click below to see the trailer of a new Norwegian documentary called the Exorcist in the 21st Century. The film follows the travails of a woman, Constanza, who clamors for an exorcist to help her purge the demons that she claims have tormented her for fifteen years. Her intended savior is the Spanish priest Jose Antonio Fortea, who, the film’s website informs us, has “a doctorate in demonology.” Who knew?

If you’re in Canada or the U.S., you can watch the whole film on iTunes.

May 29, 2013
So That's Why Michele Bachmann Isn't Seeking Reelection...
Next Post