The author of a book about life as a gay Catholic priest has officially come out about his true identity. 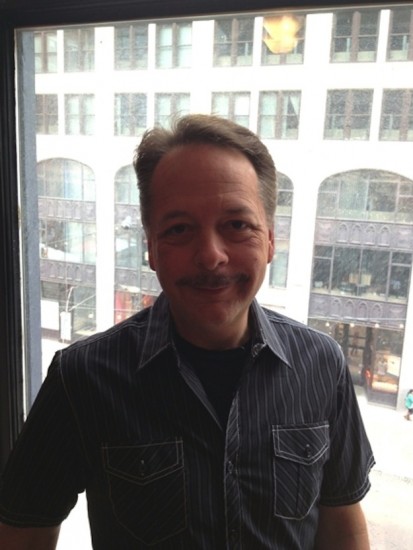 Father Gary Meier (pictured above), a priest for the Archdiocese of Saint Louis, wrote a book in 2011 called Hidden Voices: Reflections of a Gay, Catholic Priest, but published it anonymously.

Earlier this month, he released a statement announcing the book would be released a second time under his own name and explaining the decision:

I am not sure where exactly any of this will lead. It is a huge leap of faith and to be perfectly honest with you, very frightening. I know that while many will celebrate and be grateful for this publication, others will be angry and upset and feel as if I am betraying the church. I have no such intention. I am just a man trying to live a life of integrity and speak the truth that God has given me to speak. I do not mean the church any harm and in fact I still love the church very much. I see my speaking out as an act of love toward a community which was born of God’s radical inclusivity. Somehow we have lost that in our church, I would like us to get that back.

While his original statement isn’t so tough on the Catholic Church for its long history of anti-gay teachings, Meier’s May 21st column for the Huffington Post spells out more explicitly why he felt so compelled to come out now:

I have tried over the years to reconcile my silence as a gay priest with that of the Church’s increasingly anti-gay stance, but I have been unsuccessful. At the heart of every authentic call to ministry is the desire to live a life of integrity. It was my desire to live a life of integrity that led me to the priesthood and it is that same desire that has led me to where I am today. In the end it became clear that I could no longer be anonymous — that is, I could not live as a gay priest, which means living in silence while publicly pretending to support the hierarchy’s teachings on homosexuality.

Notably, he mentions a consequence of anti-gay religious influence that is often overlooked: its effect on LGBT young people.

[Catholic] teaching has caused and continues to cause harm to many gay men and women, young and old, who are looking for acceptance and love but instead find silence and shame. I am especially concerned for our LGBT youth. It’s hard enough to be a “straight” teenager dealing with the standard ups and downs of hormones and emotions, but to be a teenager with same-sex attractions in a community where your spiritual leaders, the people you look to for guidance and affirmation, are telling you that you have a disease like alcoholism and that you’re a threat to life. Can anyone survive it intact? Yet that’s precisely the message our Church is sharing. LGBT youth are hearing that they are disordered, diseased, defective, damaged goods, wrong when they should be right.

On top of that, Meier recorded a video empathizing with other LGBT Catholics and reassuring them that “there are other voices coming from our church” who love and support them equally. He also stood up against naysayers who criticized him on Facebook, among other outlets, and flat-out said why elements of the church’s teachings are so problematic:

Since his public declaration of his sexual orientation, Meier said, he has received a lot of support on his Facebook page. One woman, though, scolded him for accusing the church of a “lack of love.”

“That’s not at all what I’m saying,” Meier told his audience. “But I am accusing the church of a lack of tolerance and acceptance.”

I have immense respect for anyone who can come out about being LGBT in a sphere as hostile to difference as the Catholic Church. My utmost congratulations to Meier for his bravery. If you’re so inclined, check out his book.

May 29, 2013
New Gallup Poll Says Religion is Losing Influence in Our Society
Next Post