Megan, 22, is a recent Duke University grad and a gifted writer. Because she was born with a rare connective-tissue disorder called epidermolysis bullosa, she’s had to get used to people asking “What’s the matter with Megan?” Hence the name of her new blog.

Sometimes, strangers pray on her. Not just for her. On her. 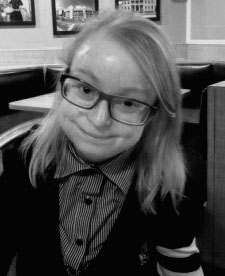 ”Having a visible disability is like shark bait for ignorant people lacking scruples,” she explains. “I swear, the mere sight of crutches is like blood in the water.”

So when she’s out and about, the faithful approach her. Well-meaning folks. Kindness in their hearts. Filled with the spirit. And they really, really want their Lord to perform a miracle. One time, Megan got caught in what she describes as an “unholy prayer sandwich”:

The woman and her mother placed one hand on my back and one on my chest and right there, in the middle of the Ft. Lauderdale airport, began to feverishly pray on my body for Jesus to heal me. Between shouts of JESUS CRISTO! and HEAL HER FATHER GOD! their bodies shook violently, as if wracked by father, son, and holy ghost all at once. I looked at my mother’s sheet-white face and mouthed “MAKE. THIS. STOP.” She looked helplessly on, unsure how to make the scene come to a swift end without seeming rude.

(***UPDATE***: To clarify, one of the women had first approached Megan’s mom to ask “May we pray with your daughter?” and the mother had mumbled consent. See also the comments.)

Another time, a man approached Megan and asked if she believed in prayer:

I choked out a yes and picked a spot on the pavement to stare at and waited until it was over. He held out his hands and prayed for God to heal me, but with the added twist and flourish of asking God to take the Devil’s hands off me.

Megan, despite her sense of humor, is somewhere between puzzled and upset when things like this happen:

Do I really seem that broken to people when I walk out the door? Does my body project a fate so grim that I actually need saving? Every once in a while I have to actively remind myself that what happened to me was an objective case of a genetic splicing error — not the Devil’s handiwork.

I’ve always wondered why faith healing requires touching, or at least the invasion of someone’s personal space. It couldn’t possibly have anything to do with some unspoken requirement on God’s part. If he’s all-powerful and listens to prayer, there ought to be no difference between a faith healer being ten inches away from his target, or ten thousand miles, right?

So what I’m left with is that, for wannabe faith healers, this is mostly a public performance, a chance to wrap themselves in their religion in such a way that their supposed virtuousness is observed by others. At the same time, I guess, it’s an advertisement for the Lord, a reminder to others that Jesus’s followers are out in force again, loudly purporting to do good.

No matter how you slice it, it surely goes against Matthew 6:5-6:

When you pray, you are not to be like the hypocrites; for they love to stand and pray in the synagogues and on the street corners so that they may be seen by men. Truly I say to you, they have their reward in full. But you, when you pray, go into your inner room, close the door, and pray to your Father who is in secret; and your Father who sees what is done in secret will reward you.

This doesn’t mean that these people can’t also have genuinely good intentions. Megan recognizes this:

There are days I appreciate the feeling that people are out there rooting for me. The problem is that someone at first glance makes an assumption that my life is so bad and full of suffering and miserable that I need immediate holy intervention. What people should really be praying for in this situation is to have their good intentions supplemented with good judgment, because I think that’s what God probably would have preferred.

***Update 2***: Raw Story has more information about and background on Megan on their website.

May 28, 2013
Andrew Brown Has It Wrong; 'New Atheism' Isn't All About Deconverting People
Next Post