Australian Cardinal George Pell has admitted during a parliamentary inquiry in Victoria that the Catholic Church has worked to systemically cover up child sexual abuse in Australian parishes.

The recent papabile described the rape of children as young as five-years-old in response to questions from the inquiry. He declared that he was “fully apologetic and absolutely sorry” for the Church’s complicity, and — when asked whether he considered the acts “totally un-Christ-like” — admitted, “I would have to agree with you.” 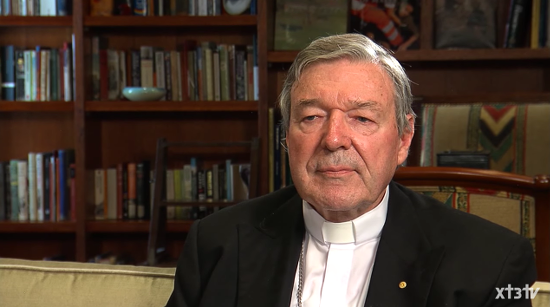 But he continued to defend the Church’s efforts to deal with child abuse, insisting that they’ve shown progress and that Pope Francis is “totally committed to improving the situation.” He also hastened to minimize the institution’s complicity, insisting that most of the problem grew out of a culture of silence in which priests did not “gossip” about probable abusers:

If we’d been gossips, which we weren’t, we would have realized earlier just how widespread this business was… I don’t think many, if any, persons in the leadership of the Catholic Church knew what a horrendous widespread mess we were sitting on.

In fact, the cover-up that Pell admits took place goes far deeper than just a failure to “gossip” about other priests. Pell admits that abuser priests have been encouraged to resign “on health grounds” as part of the cover-up, and that former bishop Ronald Mulkearns destroyed documents to keep abuse hidden.

The inquiry also asked Pell about his expressions of support for Father Gerald Risdale, who pled guilty to 30 counts of sexual abuse committed against boys between the ages of 12 and 16. Pell admitted that this was “an expression of solidarity,” because “there was something in the Gospels where Christ speaks about being with the lowest of the low.”

Asked about compensation for victims, Pell defended the practice of awarding a maximum of $75,000 per victim. He claimed that “most victims aren’t particularly interested in the money” and expressed concerns about “bleeding the Church dry” through the proceedings. He balked at the suggestion, made by parliamentary secretary Andrea Coote, that the Church might sell his $30 million property in Rome to fund more generous compensation for abuse victims.

Onlookers have been less than impressed with Pell’s apology, which seems mere empty words to many victims and their families. Some walked out of the courtroom in disgust shortly after he began to speak. Anthony Foster, whose two daughters were abused in the 1980s, noted:

It’s just another apology. It’s the same words again. It’s just not backed up with the actions that we need. What we need is real care for victims.

May 28, 2013
If Atheist Books Are Placed in Georgia State Parks, Will Christians Destroy Them?
Next Post