Bible Inspires Ordinary Christians to Raise the Dead, Just Like Jesus. Are You Ready For the Zombie Apocalypse? May 25, 2013 Terry Firma

Bible Inspires Ordinary Christians to Raise the Dead, Just Like Jesus. Are You Ready For the Zombie Apocalypse?

You’ve probably experienced, more than once, the death of a loved one. I have too. We could’ve saved ourselves an ocean of tears and a mountain of grief (not to mention the expense of the funeral) if we’d only called a Christian prayer team to restore our relative or friend to life. Nifty!

Yes, these self-proclaimed resurrection specialists really do exist. Like 75 million Americans (30% of all U.S. Christians), they believe in the literal truth of the Bible. The deadraisers are special in that they concentrate on Matthew 10:8:

Heal the sick, raise the dead, cleanse those who have leprosy, drive out demons. Freely you have received; freely give.

We’ll return to the Americans in a moment, but this wacky international movement is on my mind today thanks to a Dutch Pentecostal evangelist. I learned through a friend that the Dutchman, Ronald Plat, has been offering his services to the parents of a girl who recently committed suicide. When they declined his entreaties, he turned to a mother whose two pre-teen sons were found brutally murdered earlier this month. She, too, inexplicably refused to let him anywhere near the bodies of her children. Plat stayed positive, musing on social-media sites how the Netherlands will be “turned on its head” once his death-cheating miracles get the “media attention” they deserve.

To fully appreciate the feats Plat believes he is capable of performing through Jesus, you should know that the boys were found after a downpour flushed their corpses from the sewage pipe they’d been stuffed into. The bodies had been decomposing there for almost two weeks.

You have to admire the hubris, and appreciate the clarity of the offer (nonsensical though it is). Usually, when Christians praise the Lord for bringing a dead person back to life after prayer, it turns out that there never was a corpse in the first place; the patient suffered a life-threatening brain swelling or another symptom severe enough to almost snuff out his or her vital signs. Some people come back from near-death. It has everything to do with individual pathology and medical treatment; and as best as we can tell from the data, it has nothing to do with prayer.

It’s a good thing that there’s no wiggle room in Plat’s offer. As someone who’s read Mary Roach‘s Stiff — a blow-by-blow account of what happens to our bodies when we die — I can picture pretty well what the two Dutch boys looked like after two weeks in shallow water. Reviving two putrid, bloated, waterlogged corpses would truly be miraculous; and I promise right here and now that if Plat or anyone else pulls it off, not only will I convert to Christianity, but I’ll whip myself silly for the Lord until my skin hangs in shreds down my backside.

I am making the same promise to anyone who will bring back just one or two of the 156 child victims in the 2004 Beslan school massacre, as Russian faith healer Grigory Grabovoy infamously claimed he could do.

Most of us can probably see how cruel and exploitative it is to try and fill a bereaved parent’s head with promises of a dead child’s bodily resurrection. I laud the wisdom of the families in declining the proffered poppycock, yet for selfish reasons I’m also disappointed that we won’t witness Plat (pictured below) utterly failing to make good on his word. 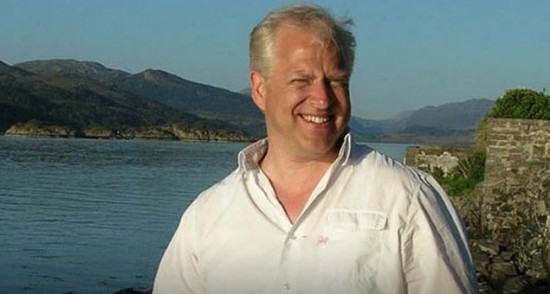 This is what’s always so riveting about out-to-lunch claims by some Christian bullshit artists that the world will end on a particular day. The creeping of time automatically proves them wrong. It would be nice to have such put-up-or-shut-up certitude about the wannabe deadraisers. What can they really do? And where’s the proof?

Ronald Plat has no record of resurrectionist accomplishments that I’m aware of, but he takes his inspiration from American evangelists such as Tyler Johnson. Johnson claims real successes: nine dead people brought back to life, so far (unless you believe his Facebook page, which says it’s ten). He has roughly thirty Dead Raising Teams operating in the United States, according to his website. Under Johnson’s flag, there are an additional 13 Dead Raising Teams praying abroad, although their distribution is a little lopsided right now: 12 in the Netherlands, 1 in Canada, and that’s it.

Johnson says it’s not just Jesus who has the power to raise the dead. Any real believer can do it:

Globally, there is a tribe of people being raised up that are not content with sitting in pews. They are inspired to walk as Christ did, in humility, character, love, but also, incredible power. They believe that they are destined to work even greater miracles than those that Christ demonstrated while on earth. They are people that desire to raise the dead. Dead raising is for every believer, not a select few. … God desires that every Christian have the faith to raise the dead. … The trumpet is being sounded. If you desire to pray to raise the dead, contact us.

So Tyler Johnson, and the possibly hundreds of hard-praying folks working with him, claim to have brought nine or ten people back from the dead. Part of me wants to call that disappointing, considering that they’ve been doing it since 2006 (the results don’t suggest significant repeatability and consistency, nor a high rate of success). On the other hand, every single one of these cases, if real, would be a bona fide jawdropper — I’ll certainly give him that. 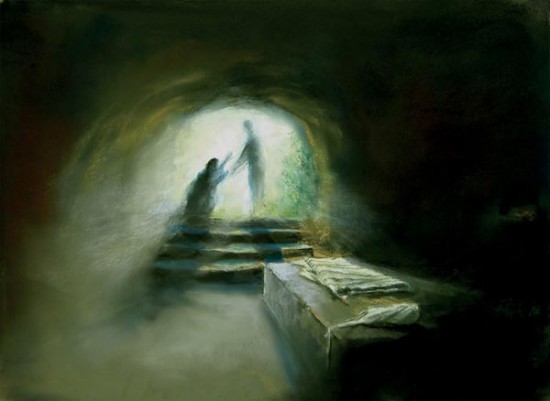 Unfortunately, if not unexpectedly, I can’t find any corroboration for the extraordinary claims. The deadraisers’ website offers

That’s a bit of a letdown, isn’t it? If you were capable of serial miracles, and you wanted the world to know, wouldn’t you supply all the proof and evidence you could, upfront? I sure would, if only to counter any suspicion of being either an empty braggard or an outright fraud — or both.

(You don’t have to be particular hard-hearted to be skeptical here, considering hoaxes like “16 Dead Bodies Confirmed Resurrected From the Dead” and the cynical Grigory Grabovoy schemes referenced above.)

Despite forgetting to provide proof, Johnson does get props for making it easy to find the links on his website that let you donate money or buy his books, so that you can support his Re-Animator ambitions, and his bottom line.

To be fair, I don’t think that most resurrection-promising Christians are in it for the money. Some may well do it out of misguided altruism, or out of conversionist zeal, or (like Plat) because they look forward to the media attention. 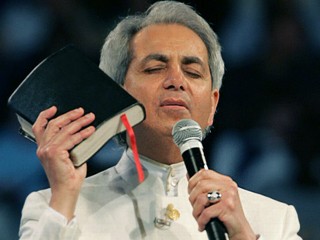 Then again, televangelist Benny Hinn (pictured above) loves the idea of bringing back the dead so that he’ll have more viewers for his Trinity Broadcasting Network show (and more donors, too):

I submit the following to my Christian friends: All this nonsense is not doing you any favors. I’m not just talking about reaping universal eye-rolling and bad PR, although there’s that. What I mean specifically is that when you try to raise the dead, your failure to produce results will likely make you feel horrible in more ways than one. For starters, you’ll feel extremely crappy (I should hope) about giving a bereaved family false hope. And through your phantasmagorical over-reaching, you may even begin to question the power or validity of your faith. It happened to this nice, sincere guy who prayed loudly for a baby to be resurrected:

“After a moment’s hesitation, I spoke to the mother. I told her I believe there is a God that can raise the dead. I told her there is power in the name of Jesus. I asked her if she believed too and if I could pray for her baby. She said yes. So, with everyone looking on, I knelt before this beautiful, lifeless child and begged God to raise her from the dead in the name of Jesus. You know what happened? Nothing. Absolutely nothing. I was left with only being able to say that no one understands the mind of God or His will…truly empty words in my mouth and heart (not to mention the mother’s).

So, here is where I am.  I’m left with doubts, fears, and even anger. I prayed. I trusted. I put my neck out. What’s more, I put Jesus’ name out there and He didn’t show up. … The baby is still dead. The mother is still lost in hopelessness and despair. And now I look like a fool and the name of Jesus is a joke.“

Perhaps it’ll finally be supplied by a Colorado production company called Mountain Light Cinema, which is working on a documentary about resurrectionist prayer. The film is titled Deadraiser, and it’s described as

resurrection stories from across the nation and an exciting view into the authentic Christian culture of miracles.

I suppose we’ll see just how “authentic” it all is. The movie is set to premiere this October. Here’s a sneak peek:

I wonder if Deadraiser will include an honest-to-god ‘prayer coordinator’ in the credits (like that other recent Jesus-miracle film, Not Today). Surely there’ll be no dearth of prayer teams to try and bring the movie back from box office hell, should it die an early death.

P.S.:  For an example of how not to present footage about pulling a Lazarus, consider Melissa Fisher at Christian XP Media, whose multiple failed attempts to raise the dead haven’t dimmed her enthusiasm for the exercise one bit.

“The dead aren’t going to be raised if we don’t pray for them. So this is just an encouragement for you to go out there. Now we haven’t seen any dead raised yet. But we know, we have been pressing in, it’s going to happen eventually. In fact, me and one of my team members actually got resurrection dreams where he saw an old man that was an alcoholic and I saw a baby getting raised from the dead. So we know that God put that in our heart. So we’re going to keep going at it.”

Hear her talk herself breathless, starting at 1:18:

Shouldn’t there be a line somewhere between optimism and delusion?

May 25, 2013
Atheists Raise Massive Amounts of Money to Help Rebecca Vitsmun Rebuild Her Life
Next Post