Remember When Penn Jillette Was the One Dishing Out Backhanded Compliments to Christians? May 22, 2013 Terry Firma

Remember When Penn Jillette Was the One Dishing Out Backhanded Compliments to Christians?

Hemant pointed out earlier today why it’s a backhanded compliment to profess delight at finding that an atheist is ethical. It happened to Penn Jillette, on All-Star Celebrity Apprentice, and I certainly agree that it’s annoying — whether the insult was intended or not.

But it goes both ways. Did you ever see this video of Penn, in which he recounts his meeting with a Christian fan who gave him a Bible?

Penn seems to confirm his own original biases by repeated statements such as these, made in apparent awe and wonder:

Penn also recalls, with some emphasis, how the fan struck him as “sincere” and “not defensive.”

All this mystifies him, it seems. He appears inordinately touched by the fan’s perceived goodness. But why? Had he really never realized that many Christians are sane and polite and kind and sincere?

The video seems like a backhanded compliment to people of faith (or at least, to Christians), even though I fully accept that Penn didn’t mean it that way.

This bias is worth calling out no matter which way it goes, isn’t it?

While I’m dishing out tough love, I should also take issue with Penn’s high praise for believers who proselytize. This is what he says:

I’ve always said that I don’t respect people who don’t proselytize. I don’t respect that at all. If you believe that there’s a heaven and hell and people could be going to hell or not getting eternal life. … How much do you have to hate somebody to not proselytize? … If I believed beyond the shadow of a doubt that a truck was going to hit you, and you didn’t believe it and that truck was bearing down on you, there’s a certain point at which I tackle you.

Really? The proper proselytizing/oncoming-truck analogy would be, I think:

“If you believe you see a barreling truck that’s about to hit me, but it literally cannot be seen by me or by anyone else who lives within the universally, scientifically accepted definition of reality, exactly why and how often do I have to tolerate your pushing me out of the way?” 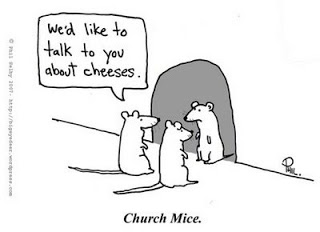 Also, at what point may I stop feeling grateful for your beneficence, and start getting really fucking annoyed about being serially tackled in order to get saved from your phantom truck?

Many Christians no doubt believe my soul is in danger because I have not accepted Jesus Christ as my personal lord and savior. Are they honor-bound, as Penn implies, to beat a path to my door to try and convert me?

How many of these freelance evangelists should I be prepared to receive on any given day? I suppose I’d politely talk to the first one for a minute or two, and hear the next one out for 30 seconds; but no matter how “sincere” and “sane” and “honest” each of them might be, I believe I’d have my darling German shepherds ready to race out by the time visitor number five was about to lean on my doorbell.

May 22, 2013
This May Be the Least Useful Oklahoma Fundraiser
Next Post